The Computer Science Department split from the Electrical Engineering Department in Fall 2021 and continues to expand. 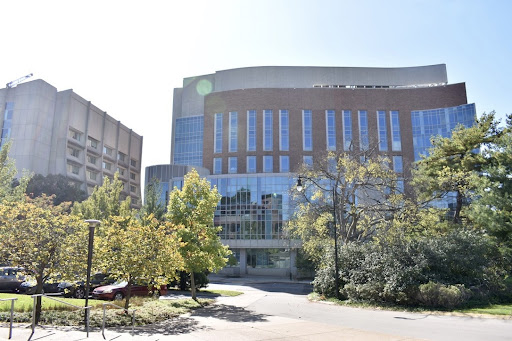 The Engineering and Science Building, as photographed on Nov. 6, 2020. (Hustler Multimedia/Anjali Chanda)

The Computer Science Department is witnessing growth in its number of student majors, faculty numbers, research opportunities and courses offerings. The department split from the Electrical Engineering Department in Fall 2021 to better accommodate growing interest.

Per Julie Johnson, associate chair of the Computer Science Department and director of undergraduate studies in computer science, this is largely an administrative change and will be seen by students through growth in faculty.

Fall 2021 will mark the start of the second year of Destination Vanderbilt, a three-year $100 million program that aims to kindle a growing interest in the field. The program’s goal is to hire around 20 new computer science faculty members, adding to the previous 20 faculty members. The Computer Science Department has already hired seven people this past year and hopes to hire another seven to eight new faculty members in the upcoming year, according to Johnson.

“We’re doubling the size of our faculty, which is very exciting,” Johnson stated. “In the meantime, the number of our students has practically doubled as well.”

“The minors numbers aren’t jumping in any big leaps and bounds,” Johnson said. “It’s the major that obviously has just exploded.”

According to Johnson, the rapid growth in computer science is due to the subject having many “flavors” and being “ubiquitous” in a diverse range of careers, spanning from data science and software engineering to entrepreneurship. Karolina Groszewska, a sophomore majoring in computer science, also stated that more majors are starting to use computer science classes as requirements, inspiring more interest in the field.

“We’re encouraged to take different classes, but once you take the CS intro class, it kind of encourages people to switch or take on a double major [in computer science],” Zakariyya Al-Quran, a junior majoring in computer engineering, added.

Al-Qurran expressed excitement about the diverse research interests that Destination Vanderbilt hopes to curate with its new faculty hires.

“[These professors] have been doing [research] their whole life, so it would be cool to have those professors, who are teaching us, be the pioneers of their expansion project,” Al-Qurran said.

When hiring new faculty, Destination Vanderbilt leaders—who are part of the Office of the Provost—target four aspects of computer science. These areas include autonomous and intelligent human-AI-machine systems and urban environments, cybersecurity and resilience, computing and AI for health, medicine and surgery and design of next-generation systems, structures, materials and manufacturing.

“Providing opportunities to all students to get research is a good opportunity to keep expanding skillsets,” Groszewska said. “CS professors foster extracurricular involvement or having more CS professors able to help with external projects or willing and able to take on young undergraduates helps a lot in diversifying students’ interests and helping a variety of students explore different fields and the like.”

With the new hires entering, class offerings for students have also increased. In Fall 2020, the Computer Science Department offered 22 courses which increased to 29 courses offered in Spring 2021. In Fall 2021, it will offer 29 courses.

Johnson also mentioned the increase of depth courses, which are advanced, specific computer science classes such as Cyber Security and Artificial Intelligence. The department offered 11 of these courses in Fall 2020 and will offer 18 in Fall 2021.

“Once [the seven new professors] have kind of integrated into the system, they’ll start teaching undergrad courses next spring and the following fall,” Johnson said. “So, that’s probably seven more depth courses coming up.”

“We work on being good teachers and we have an army of teaching assistants to help you,” Johnson said. “ Nothing should stop you from taking that first intro class.”