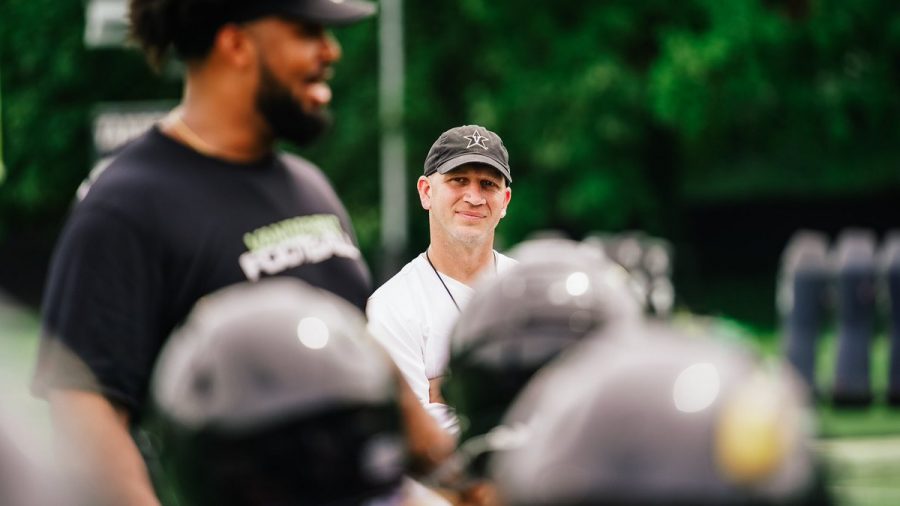 Declaring the 2020 Vanderbilt football season a disappointment would be a drastic understatement. Fans had high hopes for the 2020 season despite the COVID-19 pandemic and the Commodores’ grueling 2019 season that saw them go just 3-9, highlighted by a 21-14 upset win over No. 22 Missouri in Nashville.

Hopes of a better 2020 record were dashed after the Commodores finished 0-9 and ranked third-to-last in the country in points per game. Former head coach Derek Mason was fired before the final game of the season and key players Donovan Kaufman and Keyon Henry-Brooks subsequently transferred.

But all is not lost on West End, as new head coach Clark Lea has reinvigorated players and fans alike for the new campaign. Lea presented his vision for the 2021 season at SEC Media Days.

“We’ll say that every game that we play we’ll have a plan to win, and we’ll measure our results off our execution of that plan to win,” Lea said in July. “In the end, I’m a competitor, and I didn’t come to Vanderbilt to do anything other than win. So for me, it’s about how we design this team, how we design our tactics, how we develop as people and as teammates to put ourselves in the best position to win games in the fourth quarter.”

Nevertheless, the Commodores have their work cut out for them this season, with four out-of-conference and eight SEC opponents. Let’s dive into their first three opponents.
Week 1: vs. East Tennessee State
The Commodores’ first game of the 2021 season will be at home against the East Tennessee State University Buccaneers. ETSU last faced Vanderbilt in 2019, when the Buccaneers were shut out and surrendered 38 unanswered points. This year’s ETSU team, however, has all the components for an upset at Dudley Field.

ETSU’s biggest threat is running back Quay Holmes, who is fresh off two outstanding seasons. Holmes rushed for 1,143 yards and seven touchdowns in 2019 and 640 yards and eight touchdowns in the abbreviated 2021 spring season. Holmes is also a dynamic kick returner, gaining nearly 400 yards on 16 attempts last season. Vanderbilt has to rein him in to avoid an offensive shootout.

ETSU started two different quarterbacks last season, but they only threw for a combined 1,011 yards and five touchdowns. Considering pass defense was a struggle for Vanderbilt last season, this a welcome relief for a Commodore defensive unit with an all-new coaching staff.

The tone of the season will be set by this first contest with an FCS opponent. Lea and the Commodores should take care of business decisively or Vanderbilt’s gauntlet of SEC opponents will prove to be that much tougher.
Week 2: @ Colorado State
Vanderbilt’s first road test will not be an easy one as the Commodores travel to Fort Collins, Colorado, for a matchup with Colorado State. CSU, unlike ETSU, plays in a stronger conference and has experience in big games. This is the first-ever matchup between Vanderbilt and CSU and will be a defining game for both teams as each came off of disappointing seasons. The Rams finished 1-3 last season and struggled to score, only totaling 11 offensive touchdowns as a team in 2020.

Colorado State is a team without a defined offensive identity. Relying on the combined rushing and air attack, CSU will be looking to ride balance to victory. However, the running game is probably where the Rams are the most threatening. The dual running back threats Marcus McElroy Jr. and A’Jon Vivens rushed for a combined 320 yards and four touchdowns in 2020. The projected starting quarterback, Todd Centeio, has also shown an ability to scramble, rushing for 92 yards in four games.

Speaking of the quarterback, Centeio struggled in his 2020 campaign, only completing 39 percent of his 36 passes for 207 yards and a touchdown. Centeio was only the starter for only one game last year, before being replaced by Patrick O’Brien (who has now transferred to Washington), so CSU should be looking to prove itself through the air.

Vanderbilt has the potential to be 2-0 after its trip to the Centennial State, however, the Commodores will need to contain the ground game and rattle the inexperienced quarterback with an aggressive pass rush in order to win their first road test of the Clark Lea era.
Week 3: vs. Stanford
Week 3 is where Vanderbilt fans will get a reality check on the 2021 season—when the Stanford Cardinal come to town. Stanford comes off a 4-2 season, but they ended the campaign with four straight wins. Although the Cardinal finished strong, the games they won were decided by an average of just 2.5 points.

Stanford has the strongest opposing ground attack of Vanderbilt’s first three games. The Stanford running back room is insanely talented, with a triad of impressive runners. Austin Jones zigged and zagged for 550 yards and a team-leading nine touchdowns last season while backs Nathanial Peat and Emmitt Smith IV, son of NFL Hall of Famer Emmitt Smith III, provide additional firepower in the backfield. Vanderbilt will have to translate their run-stopping experiences against ETSU and CSU if the Commodores want to have any chance at slowing Stanford.

Stanford has its fair share of deficiencies, however. Stanford’s expected starting quarterback, Jack West, is unproven and has yet to throw a touchdown in his three-year career. Stanford also has a lackluster defense compared to the rest of the Pac-12, surrendering a whopping 32 points per game last season. Vanderbilt’s new and improved offensive scheme under offensive coordinator David Raih should shine against Stanford if the Commodore defense can stem the Cardinal onslaught.

The Commodores have a more-than-solid chance at entering SEC play on Sept. 25 against Georgia with a 2-1 record. Vanderbilt could even be 3-0, depending on how well Lea’s approach translates from the grease board to the field. Vanderbilt is definitely in for an uphill battle this season, but the fire of bowl game ambitions has been rekindled on West End.