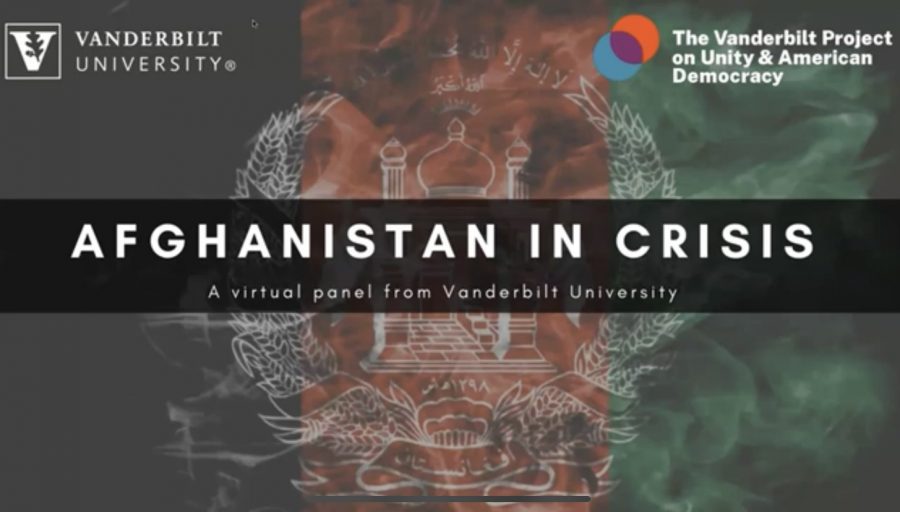 According to Vanderbilt's website, the Afghanistan in Crisis panel offered ways to help Afghans and veterans. (Vanderbilt University)

In response to the ongoing crisis in Afghanistan, the Vanderbilt Project on Unity & American Democracy hosted a panel titled Afghanistan in Crisis on Aug. 26. The online event, hosted over Zoom, was attended by over 1,000 members of the public.

Chancellor Daniel Diermeier opened the event, followed by Newton, who started by expressing sympathy for the victims of the Middle Tennessean floods. Newton then spoke of the “overlapping” and “interlocking” Afghanistan crises. He stated that these crises signaled diplomatic, North Atlantic Treaty Organization (NATO), humanitarian, human rights and structural United Nations (UN) flaws.

“In terms of the crises, these definitely represent what General Petraeus would call a non-biodegradable event,” Newton said. “This will not go away neither will it be cleaned up quickly. We are in for the long haul here.”

“In many respects, the evacuation of Saigon was far better planned and in fact took place with far greater order than what seems to be happening in Afghanistan,” Schwartz said.

Ali echoed Schwartz’s thoughts regarding the withdrawal. She spoke about a lack of cooperation between the U.S. Department of Defense, State Department and CIA. Going forward, Ali stated that multilateral cooperation would be necessary for successful missions.

“We have to work very closely with our allies and work to mitigate human rights violations on an hour-by-hour basis,” Ali said.

The panelists agreed that a greater military presence would be beneficial for intelligence gathering and nation-building in Afghanistan.

Newton then announced the live, breaking news that four U.S. Marines had been killed in the suicide bombing earlier that day at Kabul International Airport. He emphasized the relevancy and urgency of the Afghanistan crisis given this development. The total death toll has since climbed to over 170, including 13 U.S. service members.

“This is not theory. This is the real world and I think we need to stand firmly with our allies,” Newton said.

“If we close our embassy and everybody pulls out, what’s going to happen to U.S. funding, NATO funding?” Howell said. “[The Taliban] are going to have a tough road ahead on governing.”

Newton mentioned that the Taliban remains on the U.S.’s list of Specially Designated Global Terrorists. This distinction incurs legal restrictions that could prevent the U.S. from engaging in aid efforts in Afghanistan. Newton also spoke of the Special Immigrant Visa (SIV) program, citing its long approval process and therefore its inability to help all Afghans who aided the U.S.

“It is intolerable to me that our State Department and national security apparatus has not solved that problem in the last 15 years,” Newton said.

Howell encouraged Americans to welcome Afghan refugees by “bring[ing] them into the fabric of this nation” and to help with resettlement efforts. Schwartz urged viewers to contact their local officials and express their interest in the well-being of Afghans and immigrants.

“There has to be a significant amount of political noise,” Schwartz said. “This would be a really important thing to simply pester our representatives to make them know that this actually does matter.”

Ali spoke of ways for people to use their personal skills and convictions to help Afghans.

“If you’re a lawyer, provide pro bono advice through Human Rights First around the SIV program. If you’re a doctor, provide medical relief at a free clinic servicing the influx of people coming from Afghanistan in your local area,” Ali said. “If you’re passionate about women’s rights, donate to Women [for] Women International or Vital Voices or you can also donate to the International Rescue Committee.”

Newton, a U.S. Army veteran who served in Afghanistan and Iraq for 21 years, closed.

“Stand firm in the face of fear, and terrorism and injustice,” Newton said. “That’s what America is for.”