The $50 Summer/Holiday Plan credit will expire at the end of each day. Students will also receive a one-time credit of $15 in their Meal Money fund, which will not expire. 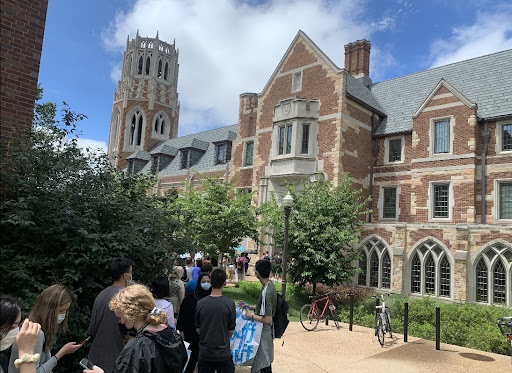 In compensation for dinner service food shortages on Aug. 23, Campus Dining announced that students will receive a daily credit of $50 from Aug. 24 to 29, expiring at the end of each day. In addition, they will receive a one-time rollover Meal Money credit of $15. Meal swipes at dining halls will continue to be available for use, and the Meal Money credit can be spent at any Taste of Nashville partner restaurant or Grubhub location.

“We’ve heard your feedback, and are aware of unacceptably long lines and product shortages,” the Campus Dining statement reads. “We expect that these increased options will reduce the strain on both dining hall staff and students, and allow our operations to rebuild stock for next week.”

According to sophomore Anjali Raman, who attempted to use the $50 credit today, she was charged through her Meal Money fund, in which only the $15 credit is currently available, rather than the Summer/Holiday Plan, which is not visible on the GET app currently. Campus Dining stated attributed this issue to a system error and stated that it has since been resolved.

Regarding future improvements, Campus Dining said in its statement that it is working to resolve supply chain interruptions, such as late or incomplete deliveries and other backup issues. In addition, it has built an on-campus “commissary kitchen” to reduce wait times for Rand Grab & Go Market orders. Dining halls will also offer additional food lines to increase service efficiency.

On Aug. 21, Campus Dining closed all dining halls for dinner service, requiring students to purchase dinner off campus using either Meal Money or personal funds. According to Campus Dining’s website, student meal plans were activated on that day.

In an email to Campus Dining, Associate Vice Chancellor David ter Kuile and Vice Chancellor for Administration Eric Kopstain, Hwong outlined his concerns with dining operations and copied ten students who were similarly not able to eat using meal swipes that night and requested to be included in the conversation.

“Those residing on campus as of [Aug. 21], regardless of when they moved in, should not be forced to go spend meal money or pay out of pocket for meals that should be provided by the school,” Hwong said in the email. “We are paying to be able to use these meal swipes, and having zero dining halls open at a time when the meal plan is in effect is completely unacceptable.”

Campus Dining responded to the Aug. 21 closure by outlining greater dining accessibility in the opening of the next academic year.

“Dining hall opening schedules have historically been synchronized with housing move-in dates,” Campus Dining said. “Based on the significantly larger amount of early arrival students this year, we are planning to open earlier next academic year to accommodate the larger campus population.”

Moving forward, Hwong emphasized the need for a “productive” dialogue between students and Campus Dining.

“I’d also like to make clear that while monetary compensation is an important and necessary step in addressing the shortcomings of Campus Dining thus far, it is more important to implement meaningful changes in dining service offerings that actually fix the issues we have been experiencing,” Hwong said.

This article has been updated with responses from Campus Dining.