Maroon 5 has had plenty of unique chart-toppers over the years, but the band’s seventh album “Jordi” falls short of previous successes. 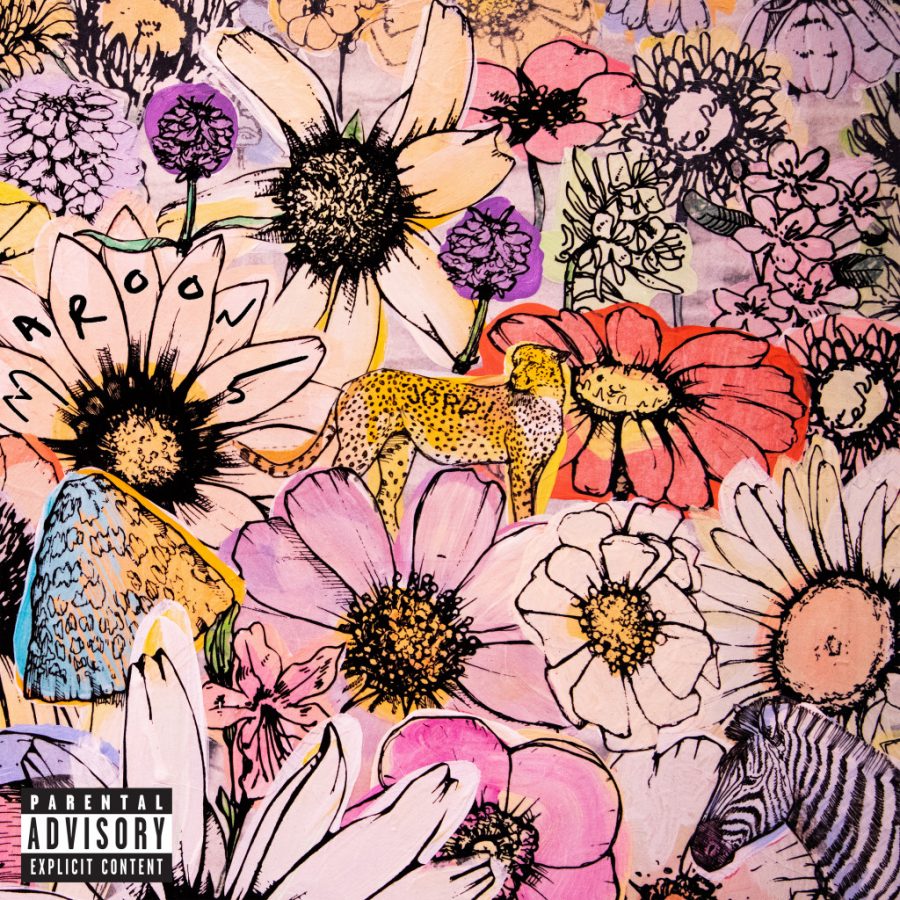 Ever experience the crushing disappointment when you wake up hangry for coffee only to realize you’re all out? Yep, me too, except I was listening to Maroon 5’s latest and seventh album, “Jordi.” With touches of bleak flowers and hints of bright colors, the cover and the album attempt to paint a tender and layered homage to the band’s late friend Jordan Feldstein, or “Jordi” as they affectionately dubbed him. But, unfortunately, the album is more of a “Beautiful Mistake” than an artistic triumph.

“Jordi” captures the many emotions involved in a complicated and impassioned relationship through a unique combination of rap and electro pop with morose and psychedelic undertones. It unmistakably conveys the raw suffering of the relationship and eventual heartbreak, though I personally found it difficult to relate to some songs. Combined with weak flow and abrasive rhythms, this lack of relatability means the album falters without Maroon 5’s signature creativity, soul and balance. Let’s take a look at each of the album’s 14 songs:

This seems like a classic break-up song, but it’s a little underwhelming. The lyrics seem thrown together haphazardly, and the first verse makes minimal artistic sense in context with the chorus.  The rap similarly felt out of place. The song lacked flow and harmony—potentially to convey the despair and confused state of a newly single individual, but that’d be a stretch.

Each verse was repetitive and almost monotonous despite the beat, somewhat accurately conveying the reality of being truly “lost” after a break-up. The song’s initial upbeat tempo is misleading, considering the inherent sadness of the lyrics. I felt that the song’s sound was overdone, common and lackluster; there was no creative novelty here.

In terms of the break-up trope, this song conveys the passionate state of unrest that follows the ending of a relationship, but in a tired, weirdly psychedelic fashion—it gave me Camila Cabello’s “Never Be the Same” vibes. The echo effect superimposed on itself adds to the kaleidoscopic feel of the song, but this gets old fast. The rap is average as well, both in terms of the banality of the lyrics and sound, and it was too rushed compared to the rest of the song. The tension building towards the end of the song is left unresolved due to the unsatisfying, abrupt ending. Imagine a rollercoaster that remains at the top of the track right before the iconic big drop, perpetually suspending its victims in midair—a fitting metaphor for this song.

This track captures one of the warmer interactions and emotions within the otherwise tumultuous relationship with Jordi. It has more of a techno-beat than the others before it and a similar psychedelic feeling to “Echo” to mimic the feeling of being in love or, quite literally, sick with love. It was palpably lighter than the preceding songs, supplemented by the gentle “oh oh” in the background.

I was truly confused with this one. “Remedy” is a poorly constructed mosaic of different scenes of the relationship that land somewhere between depressing and nostalgic. The beat is faster to overcompensate for being the shortest song in the album. Most ironic: though the song is titled “Remedy,” the pain only seems to be affecting the singer more and more throughout the duration of the song.

Interestingly, “Seasons” is about moving on without actually moving on (once again, ironic). Phrases like “turning the page” and “done with summertime madness” imply some sort of emotional resolution, but the other songs in the album do not corroborate that. This song was noticeably more conversational than the others in the album. I disliked the repetition of the word “weekend,” it simply felt unnecessary.

The main premise of this song is that the world is unbearably dark but the singer’s lover is his “one light:” a cute sentiment but, let’s be honest, we’ve heard it before. The rap nicely reinforced the familiar metaphor. The song overall was okay but lacked novelty similar to other songs in the album.

Holistically, this track delineates a gentle fight between two lovers that gains more intensity as the music progresses until it finally climaxes near the end. The female lead in the first verse marks a distinct artistic disparity between this song and the others. I enjoyed the musical and emotional interplay between the two characters in the relationship, but admittedly will still not be adding this song to my playlist as it lacked artistry.

This song was actually released in July 2020 as a preview to the new album. Upon further research, I discovered that the song was written with consideration of the coronavirus pandemic and the protests in honor of George Floyd. I respect Maroon 5 for taking the opportunity to acknowledge the atrocities of the past year, but the message remains vague. The lyrics seem to be more about pining for a lost love (of the romantic sort) than racial injustice or the pandemic; perhaps the message is meant to be subtle and discuss the pain of losing any kind of loved one, but it is definitely not clear.

Featuring the legendary Juice Wrld, this song captures the confusion and pain of unreciprocated love. The emotion rings raw and palpable, vividly calling listeners to empathize with the singer’s pain. The beat is slow and relaxed as if the singer is imploring his lover to tell him how she feels. The tone, music and beat all reinforce each other well to shape the melancholy mood of the piece.

“Memories” was originally released in Sept. 2020 as another preview to the album. Although one of the first released in the album, it actually depicts one of the final stages of grief and heartbreak: acceptance. The song does the best job of conveying the intended message of the album: love for Jordan Feldstein. The line “I’ll carry these torches for ya that you know I’ll never drop” resonates powerfully throughout the song.

The remix of the song was released over a year later and fits more into the album than the original. Right from the beginning, we can hear a darker tone over the music that paints the song grey and gloomy. While the older version emphasized a fond remembrance of one’s loved ones and an appreciation for what is, the newer song hints at the singer’s false façade of acceptance that masks the crippling pain and darkness underneath. Both versions represent different sides of a heartbreak that are both equally realistic and important.

In many songs, the physical aspects of a relationship are often emphasized over the emotional—a defining characteristic of Maroon 5. However, most of the tracks in “Jordi” did the opposite and focused on the emotional rather than the physical. “Button” stands out as the sole song in the album to strictly discuss the lustful side of the singer’s relationship. On another note, the rap was in Spanish—an interesting and unexpected touch.

The final song in the album is honestly quite random. Derulo’s sound is quite unique and distinct, making the song stick out like a sore thumb from the rest. The disconnect and lack of harmony within the album itself is noticeable to say the least. With this song, listeners get an upbeat and airy glimpse into the singer’s love-life while the other tracks portray the darkness and wistful longing of the relationship. The song also seemed to discuss the earlier, bouncy stages of a relationship and courting, which goes against the chronology of the album considering it is the last song.

“Jordi” is a confusing cluster of songs that, much like the band members, each have their own unique sounds, rhythms and messages. While some tracks have recognizably good qualities, the album as whole suffers from a severe lack of creativity and depth. Maroon 5 has released a lot of great music during their run, but this album simply does not make the cut.