Vanderbilt has made serious headway over the past few weeks in Clark Lea’s first recruiting class. 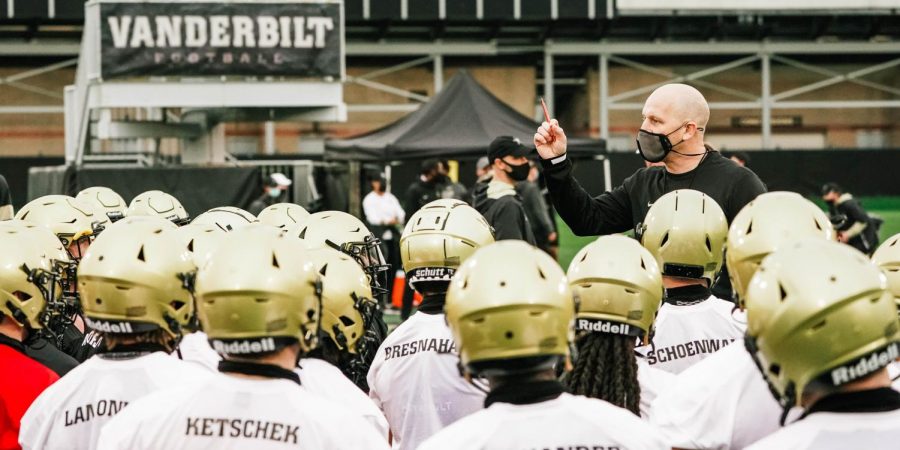 Vanderbilt football and new head coach Clark Lea pulled off some fireworks over the Fourth of July weekend, reeling in four commitments from the Class of 2022 over a two day period and two more over the past week. Lea, with the help of Barton Simmons and the rest of his new staff, has been able to capitalize on the combined momentum of his arrival on West End and the announcement of new athletic facilities to reel in a solid crop of recruits thus far.

The first-year head coach has the Commodores in a good spot with a few months left until National Signing Day in November: Vanderbilt’s recruiting class ranks 28th in the nation and 11th in the SEC (49th and 13th last year) according to 247Sports. Much will change between now and November, however, if the Commodores continue on their current pace,it will be a massive win for Lea in his inaugural class—Vanderbilt hasn’t had a class rated that highly since 2013, when James Franklin brought in the 26th best class in the country.

Thus far, Lea’s biggest wins in this cycle include keeping Langston Patterson—a top-500 recruit from Nashville—home, picking up a quarterback of the future in three-star Drew Dickey, and loading up on defense. Lea has particularly focused on the secondary as he looks to implement his defensive schemes that worked so well at Notre Dame at Vanderbilt.

Here’s a recap of who the Commodores landed over the first two weeks of July.
David Siegel
David Siegel—a 6’6”, 260 lbs. offensive tackle from New Canaan, Connecticut—was the first domino to fall on this recent run of momentum for Lea and his staff. Siegel boasted a plethora of offers including Power Five schools Duke, Louisville, Georgia Tech and Illinois. Duke and Louisville were the Commodores main competition as he took visits to both schools before committing to Vanderbilt. 247Sports rates him as a three-star prospect.
Miguel Mitchell
Mitchell kicked off July with a bang, committing to Vanderbilt on the first of the month. A three-star recruit from Oxford, Alabama, Mitchell chose the Commodores over offers from Wake Forest, Memphis and others. Mitchell took an official visit to Nashville on June 26, then received an offer on June 27 before committing just under a week later. Vanderbilt views him as a safety and he measures at 6’1”, 205 lbs.
Kenzy Paul
The first of three commitments on the Fourth of July, Kenzy Paul represents one of Vanderbilt’s best gets in this cycle. Paul—who is a Volunteer State native from Chattanooga’s McCallie School—picked the Commodores over offers from Duke, Cincinnati, Georgia Tech, Indiana, Michigan State, Mississippi State, Missouri, Ole Miss, Syracuse, Tennessee, Virginia and Virginia Tech. Like Siegel, the Commodores’ main competition for Paul was Duke—he took an official visit to Durham on June 4, before visiting Nashville on June 8. Paul rates as a three-star recruit, ranked in the top 1,000 nationally and top 30 in the state of Tennessee, per 247Sports, and will play either corner or safety for Vanderbilt.
Bryce Cowan
Bryce Cowan kept the fun going on the holiday, committing just a few hours after Kenzy Paul on the Fourth. Cowan is a three-star linebacker out of Tallahassee, Florida, who received an offer from Vanderbilt last month. Vanderbilt is Cowan’s only Power Five offer, however, 247Sports ranks him as a three-star prospect and the 150th-ranked linebacker in the talent-rich state of Florida.
KD Hutchinson
The Commodores’ third and final commitment on the Fourth of July came from KD Hutchinson—a wide receiver from Hamilton, Georgia. Hutchinson possesses blazing speed and shiftiness and checks in at 5’7”, 175 lbs. He is a three-star recruit, rated in the top 1,000 nationally and top 100 in Georgia, according to 247Sports. Vanderbilt’s main competition here was Louisville as Hutchinson took an official visit there on June 11, a week after visiting West End. Hutchinson also had offers from Boston College, Colorado, Tulane, Washington State and others.
Caleb Coley
Perhaps the most impressive of the recent bunch of recruits is Caleb Coley, a cornerback out of Warner Robins, Georgia. Coley rates as a three-star recruit in the top 1,000 nationally, according to 247Sports. What is most intriguing about the Georgia prospect, though, is his offer list—Coley boasts offers from Clemson, Miami, Ole Miss, Northwestern, Michigan State, Wisconsin, Wake Forest, Virginia and more. He took visits to a trio of Big Ten schools in June, traveling to Northwestern, Michigan State and Wisconsin before ultimately pledging his commitment to the Commodores. Coley is the fourth commit from Georgia in the class and eighth within the top 1,000.
Steven Sannieloa
Adding onto an already impressive string of commits in the defensive backfield, Steven Sannieloa committed to the Commodores on Saturday afternoon. The Maryland native chose Vanderbilt over a final three that included Purdue and West Virginia—he also boasted offers from Boston College, Duke, Maryland, Pittsburgh and Virginia. Sannieola will likely line up at safety for the Commodores and checks in at 6’2”, 180 lbs. 247Sports rates Sannieloa as a three-star prospect who is just outside of the top 1,000 nationally.

**Update 7/14/21 **
Darren Agu
Clark Lea has continued to capitalize on his July momentum, landing his biggest get of the 2021 cycle this afternoon in defensive end Darren Agu. Agu is a 6’6, 225 lb. edge rusher from Ireland, who recently decommitted from Notre Dame and flipped his pledge to Vanderbilt a day later. A high school teammate of Linus Zink, Agu is the Commodores highest rated commit of the 2022 class and held offers from Alabama, Notre Dame, Auburn, Florida State, Tennessee, and dozens more. The addition of Agu bumps Vanderbilt to the 25th best class in the nation, per 247Sports.