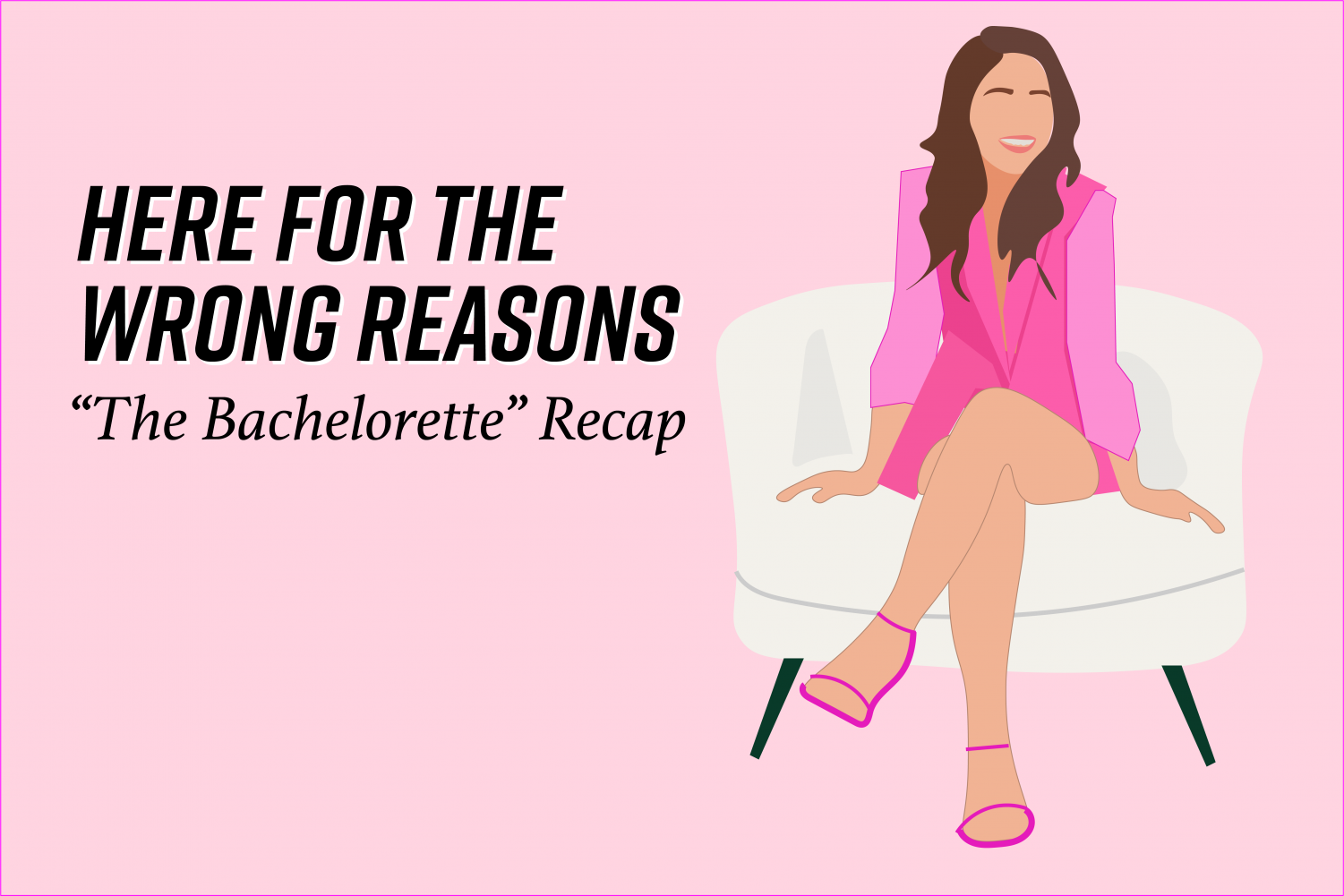 Here for the Wrong Reasons: Season Preview and Episode 1 of ‘The Bachelorette’ Season 17

Welcome to the summer edition of “Here for the Wrong Reasons,” where I’ll be previewing and recapping all of the champagne-guzzling and petty “Can I steal you for a second?”s of the 17th season of “The Bachelorette.” Nothing boosts your confidence about your own love life like watching a bunch of desperate 20-somethings compete for a stranger’s affection! Check back at the end of the season for updates on Katie Thurston’s journey to become an Instagram influencer find love. Make your picks in Vanderbilt’s (very un)official “Bachelorette” Fantasy League.

Editor’s Note: This article has been updated to correct a contestant’s name and a factual error.

While we can expect the traditional clichés (think: First Impression Rose, hot tub dates and an inordinate amount of champagne toasts), this season is going to look a little different from previous seasons. You might be thinking “hey, Tayshia and Matt also had weird seasons with quarantine periods and settings outside of the Bachelor Mansion,” and sure, I’ll give you that, but gear up for perhaps the most dramatic change ever (see what I did there?): Chris Harrison isn’t hosting.

Yes, you read that right. Harrison, synonymous with the show itself, will not be doing the important work of informing Katie that she’s handing out the last rose of the night. Following an interview in which he gave “Bachelor” contestant Rachael Kirkconnell a pass for her participation in an Old South slave-plantation themed formal, Harrison stepped down from his role in the franchise. His resignation only became official on June 7, the night of Season 17’s premiere.

Who is filling his shoes, you ask? Well, no one permanently thus far, but this season you can look forward to former Bachelorettes Kaitlyn Bristowe and Tayshia Adams helping Katie along her journey to find love. Personally, I’m a fan of Kaitlyn’s podcast, Off the Vine, and Tayshia is undeniably lovely, so I’m looking forward to what they bring to the table. I just hope they don’t steal Katie’s thunder, because if I’m being honest, Kaitlyn’s sense of humor and Tayshia’s beauty are a recipe for overshadowing Katie.

We can also anticipate a lot of talk about being “sex-positive.” Franchise loyalists will remember Katie’s limo entrance on Matt’s season, when she emerged with a glowing pink vibrator like the DGAF queen she is. This has led to a lot of talk about sex positivity, which is great considering the show’s history of slut-shaming (see: Nick Viall to Andi during After the Final Rose, Luke P. to Hannah Brown and the literal producers of the show to Kaitlyn Bristowe). However, it’s pretty clear from the promos and the first episode that we’re going to hear the phrase “sex-positive” almost as much as we hear “journey to find love” and “can I steal you for a second?” If you’re of legal drinking age, I suggest taking a sip each time you hear someone on the show say it.

What Stood Out (in a Good Way) From Episode 1

Connor B., aka Cat Guy. I know—hear me out. He gave me major “Cats” (2019) vibes at first, but he kinda won me over? She does love cats and he got the first kiss, so points in his book. However, Katie did say that they’d have to work on his kissing, which is equal parts painful for him and incredible for the viewer, because schadenfreude, am I right?

Katie’s apt observation during limo entrances: “Why are they all so hot?”

The guy who came in the gift box. That commitment, though. I was so sure he was going to be ugly since he hid himself up until, like, ten minutes before the rose ceremony, but he’s honestly pretty attractive, so I wasn’t mad at it.

Katie’s good judgment: “I wasn’t feeling the vibes with the RV”… Yeah, no sh*t. A guy who’s allegedly competing to be your husband owns an RV. And his name is Jeff. With all of the helicopters, ATVs and yachts the people on this show go on, it’s like he was asking to be mocked.

What Stood Out (in a Bad Way) From Episode 1

Katie (and the internet) seem to love Greg G., considering he received her first impression rose. But for what it’s worth, I’ve heard that Greg G. doesn’t “return the favor” with the women he dates, if you will, so not exactly the “sex-positive” angle Katie is going for.

Mike is another virgin Christian athlete. We are TIRED of the virgin plotline, ABC! Maybe he and Colton can bond during “Paradise.”

Aaron started a pissing match with Cody approximately two hours after they met. I had to Google their names, which is how irrelevant they are. We did not come here for toxic masculinity.

Jeff the RV guy again. He’s a surgical skin salesman. I’m not sure if that means he sells human skin or not, but either way I’m getting major “American Psycho” vibes.

The guys equating “sex-positive” with “I’m always down to have wild, kinky intercourse with you.” No thank you <3

Blake Moynes arriving in the season preview…did anyone ask for the return of this Sully from “Monsters, Inc.” look-alike? I think not.

All in all, this is going to be an interesting season, to say the least. Personally, I’m most intrigued by the change in hosts and look forward to seeing how that pans out. Check back in at the end of the season for my takes on the men, the finale and (most importantly) Katie’s ~journey~ to find love.