The Vanderbilt Hustler • May 28, 2021 • https://vanderbilthustler.com/40688/featured/womens-tennis-christina-roscas-final-stand-ends-in-the-elite-eight-of-the-ncaa-tournament/

Fifth-year senior Christina Rosca ended her career in grand fashion, making an underdog run to the quarterfinals of the NCAA Tournament before falling to No. 1 Sara Daavettila. 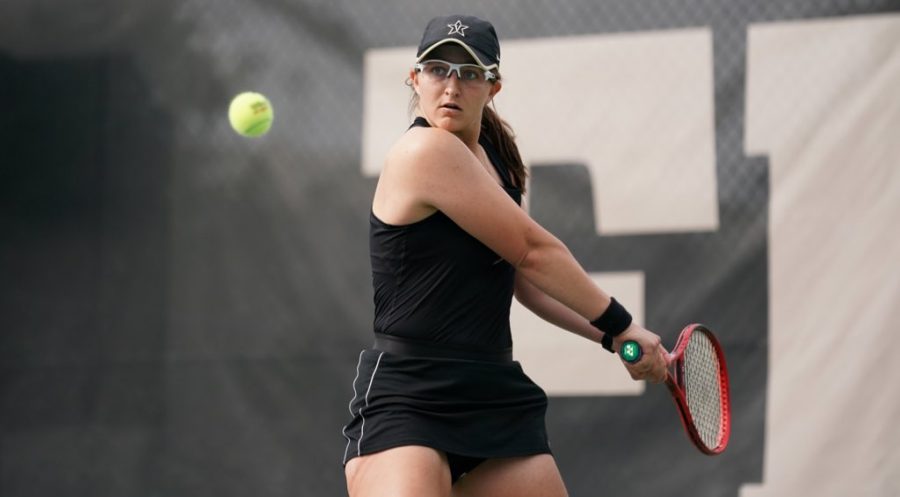 Senior Christina Rosca advanced to the Elite Eight of the NCAA Tournament before being eliminated. (Twitter/@VandyWTennis).

“She always finds a way, and if she can’t, it’s because the other player had to put a dagger in her,” head coach Aleke Tsoubanos said.

Christina Rosca’s run through the NCAA Individual Tournament came to an end Wednesday afternoon in the Elite Eight quarterfinals against top-ranked Sara Daavettila of North Carolina. Her play throughout the tourney epitomized grit and resolve as she fought back from multiple deficits against some of the best players in the country.

Rosca, ranked No. 43 coming into the tournament, first faced No. 44 Emmanuelle Salas in the Round of 64 on Sunday afternoon. Following tight opening games, Rosca got a break on Salas at 5-5 and carried it to a 7-5 first-set win. Rosca seized the swing in momentum and finished the match with a 6-3 second set that clinched her spot in the Round of 32.

In the second round, Rosca played the role of an underdog against No. 10 Isabella Pfennig, a talented true freshman from the University of Miami. Rosca and Pfennig were tied 2-2 early, but Pfennig strung together four straight games to take the first set. Rosca rebounded quickly, responding with a 6-2 set of her own.

“When I was down in those situations, I just tried to stay really calm and tell myself that I’m definitely very fit,” Rosca said. “So I knew that I’d do better in the long term with those super hot and windy conditions.”

The two players, tied in both games and sets, went into a decisive third act. After some early back and forth, Rosca put together another run and never looked back as she upset No. 10 Pfennig with a 6-3 third set.

The Round of 16 pitted two underdogs against one another with Rosca facing No. 49 Kelly Chen of Duke, who had previously upset No. 8 McCartney Kessler. Chen came out strong early, but Rosca recovered to pull within a game at 4-5 in the first. Chen shut down the run and closed out the next game to win the first set. Rosca fell behind 0-3 to start the second set, trailing Chen once more.

“It’s kind of a weird way to think of it, but I said to her, ‘You eat an elephant one bite at a time,’” Tsoubanos said.

Down 0-3, the poise of the Vanderbilt star allowed her to settle in and take one bite at a time, winning six of the next seven games along with the second set. Once again, Rosca found herself tied with her opponent in games and sets heading into the final frame. Rosca and Chen traded service games until Rosca won a break and closed out the match 6-2 in the third.

For the fifth time in program history, we have a player in the quarterfinals of the #NCAATennis singles championship. #AnchorDown | @chrisrosca pic.twitter.com/LSQS105iKs

The victory against Chen made Rosca only the fifth Vanderbilt women’s tennis player ever to advance to the Elite Eight.

“[Rosca] has been one of the best competitors we’ve ever had, it never surprises me when she comes back,” Coach Tsoubanos said.

Rosca’s perseverance is not limited to the court either, as she has battled back from both a hip surgery and a cancelled season within the last year.

“She had major hip surgery less than a year ago. So for her to come back and be playing at this level is just remarkable,” Tsoubanos said. “I mean she’s in touch with her surgeon at home who is just in awe of what she’s doing.”

The top seed of the tournament, Sara Daavettila of North Carolina, was waiting for Rosca in the Elite Eight. Daavettila advanced through the tournament with relative ease, only going to a third set in one of her matches. Rosca was ready for the challenge, though.

“It was less about, ‘Hey, you’re playing the top-ranked player in the country,’ and more about, ‘Hey. this is a great opportunity,’” Tsoubanos explained. “For her, the focus was on what I need to do and how I need to play.”

The match began with Rosca and Daavettila each defending their first service games before Daavettila pulled away, winning five of the next six games to take the first set. Rosca rebounded yet again with a break to go up 2-0 to start the second frame. In the next game, Rosca went up 40-15 with her serve, but Daavettila proceeded to narrowly steal a break. Daavettila then evened the set at 2-2, due to three returns from Rosca that were mere inches away from staying in. The North Carolina star got another break to go up 3-2, as Rosca started to show her frustration.

Daavettila defended her serve to go up 4-2, but Rosca got the chance to stay close in the set with her service game. The Vanderbilt star went up 40-30, but a cutting forehand by Daavettila on the next point set up a pivotal break point. The two stars rallied before Rosca mishit a backhand return, leaving her down 2-5 in the second set.

With the match on the line, Rosca broke Daavettila as the top seed went into the net on a return at 40-30. This small victory seemed to buoy Rosca’s spirits, as she dominated her next service game with great energy to bring the set to 4-5. Daavettila leaned heavily on her serve as she went on to lead the next game 40-15. At match point, Daavettila sent her first serve into the net, but struck back with a second serve ace to close out Rosca and move on to the Final Four.

Christina Rosca ends her illustrious Commodore career with the third-most singles victories in school history at 117. She was First-Team All-SEC three out of her last four years, with the only gap due to the cancellation of the 2020 season.

“She’s represented this place with such class and dignity and been just an incredible ambassador for women’s tennis but also just for Vanderbilt athletics and the university as a whole,” Tsoubanos said.

As a student-athlete, Rosca graduated with a bachelor’s degree in neuroscience and a master’s degree in medicine, health, and society. She plans to play professional tennis for at least the next two years while simultaneously applying to medical school.