The Vanderbilt Hustler • May 27, 2021 • https://vanderbilthustler.com/40674/featured/mens-golf-ncaa-championship-preview/

The Vanderbilt Commodores made it to the NCAA Championships because of their team chemistry and commitment, which will be the catalyst for success on Memorial Day Weekend. 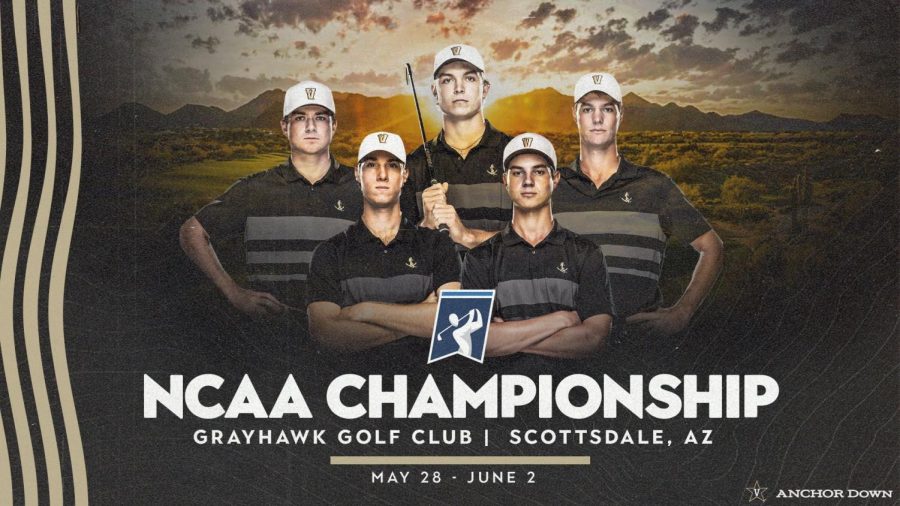 The Vanderbilt Commodores will look to win their first NCAA Championship this weekend, as they compete in the tournament for the 10th time in school history. The NCAA Championship will begin with the first round, which will be played from May 28-30. The top half of participants from the first three days will enter the next round. The quarterfinals and semifinals will be played on June 1, followed by the finals on June 2.

The Commodores’ last two tournaments have resulted in wins in both the SEC Championship and NCAA regional championship. Although these feats are surely impressive, Vanderbilt has more to prove.

“We’ve got a goal to finish this thing the right way,” head coach Scott Limbaugh told the media on Tuesday. “We didn’t come this far to just come this far. I think the boys will be ready when the lights come on.”
Tournament Format & Participants
The 30 schools were selected into the field by taking the top five schools from each of the six NCAA regionals, which were played on May 17-19 in different areas of the country. Among the 30 participating schools this weekend, the Vanderbilt Commodores are seeded 11th overall.

The top eight schools from stroke play will then enter three rounds of match play to decide a national champion.

The field of the tournament is provided below in seed order:

The 13th-ranked Commodores enter the NCAA Championship riding high. This season was different from any of Vanderbilt’s recent years due to the loss of star John Augenstein. Augenstein came to Vanderbilt in the fall of 2016 and found success right away, as he was the 2017 SEC Freshman of the Year. Augenstein evolved, and by the time he was a senior, he was a four-time All-American and the 2020 SEC Player of the year. Preparing for the 2020-2021 school year, Augenstein stayed at Vanderbilt as a fifth-year senior. In the fall of 2020, the Commodore legend decided to close his chapter as a collegiate golfer and move on to professional golf.

The Commodores lost Augenstein and had big shoes to fill. But Limbaugh’s squad filled those shoes, by not attempting to replace Augenstein, but instead by stepping up.

For the Commodores, playing without Augenstein was unfamiliar. Flashback to February 13. Vanderbilt underperformed and placed seventh at the Gator Invitational, which was their first competition of the season. Just a few days after this tournament, Limbaugh addressed how the team should use Augenstein’s departure as an opportunity to grow.

“The truth is you don’t replace John [Augenstein],” Limbaugh said.“That’s never been the goal. It’s about other people stepping up, and it provides a great opportunity.”

This mantra of stepping up instilled by Limbaugh has been exactly what the Commodores have done this season.
Team Accomplishments
After the Commodores placed seventh at the Gator Invitational, Vanderbilt finished in the top five in four straight tournaments.

More importantly, the Commodores placed first in the SEC Championship and NCAA regional.

The SEC Championship, which was played at the Sea Island Course in Georgia, included many of the nation’s top schools. Vanderbilt was among six schools in the field ranked within the top 25 in the nation. Although Vanderbilt was not favored to win the tournament, William Moll made a three-foot putt to bring the trophy back to West End for the first time since 2017.

Just weeks later, Vanderbilt placed first in the NCAA Regionals, which was played at the Golf Club of Tennessee in Kingston Springs. Vanderbilt did not just punch their ticket to the NCAA Championship, but also made a statement by scoring an impeccable 18-under score over 54 holes of competition. Vanderbilt beat the second-place Arkansas team by a comfortable lead of nine strokes.

“I thought it was the first complete golf tournament we have played,” Coach Limbaugh said about the NCAA Regionals. “This was a big step for us heading into the national championship.”
The Recipe for Success
“All of us are so close to each other,” junior Reid Davenport said. “It almost feels like we’re all brothers. We are going to play the same game and lean on each other.”

The team-first motto instilled from the head coach has become contagious and is the Commodores’ x-factor to success. The student-athletes recipe for success will be to continue to play smart golf and stay aggressive.

“We have a deep roster,” junior William Moll said. “I think one of the best aspects of our team is that we are a brotherhood, and we have really good team chemistry. We can trust that we are doing well.”

Vanderbilt tees off with No. 10 seed Arizona State and No. 12 seed Georgia at 2:47 p.m CDT on Friday and will tee off with the Sun Devils and Bulldogs on Saturday at 9:27 a.m. CDT.

Live scoring can be followed here.