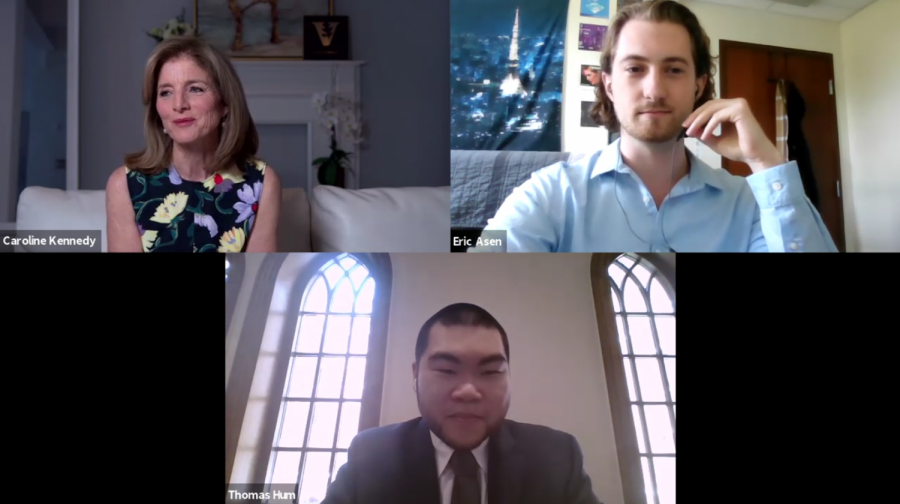 Ambassador Caroline Kennedy delivered her Graduate’s Day address to the Class of 2020 virtually at 11 a.m. CDT on Friday, April 30.

Kennedy is a former U.S. ambassador to Japan (2013 to 2017), bestselling author and attorney.  She was awarded the Nichols-Chancellor’s Medal, one of Vanderbilt University’s highest honors. The medal is awarded to “those persons who define the 21st century and exemplify the best qualities of the human spirit,” and is usually bestowed the day before Commencement. The 2021 recipient of the medal was Dr. Anthony Fauci. Kennedy was originally slated to deliver her Graduate’s Day address to the Class of 2020 last year at Memorial Gymnasium, but the event was postponed to 2021 due to the COVID-19 pandemic.

The Hustler sat down with Kennedy for a conversation about how the pandemic has changed the U.S., American foreign relations with Asian countries, the postponed 2020 Tokyo Summer Olympics and racism in America.

Vanderbilt Hustler: You were originally slated to speak in May 2020 at the Memorial Gymnasium, but are now speaking virtually to the Class of 2020 a year later. How has the pandemic changed America since then?

Caroline Kennedy: I think that we’ve seen incredible acts of selflessness and courage on behalf of healthcare workers, first responders and people [such as] delivery service workers and I think that that has really given us all a sense that we are one community and we depend on each other in ways that we would often take for granted.

In President Biden’s recent meeting with Prime Minister Suga, he described Japan as being a new “ally in chief” as tensions with China begin to rise. How important do you believe it is that the U.S. keep close ties with democratic Asian countries like Japan, Korea and Taiwan in light of these rising tensions?

Well, I don’t think we can be successful in the 21st century without alliances for the United States, and I think it’s been interesting to watch our relationship with Japan evolve—that’s obviously the one that I know the best—but I think we are counting on Japan to be an even stronger partner. So, over time, that relationship has evolved from one where the United States was so dominant to one where we are much more equal partners. Obviously, we still protect and defend Japan—we’re responsible for that—but I think that it’s a very interesting evolution, it’s an adjustment for the United States as well as for Japan. Certainly, as for the other democracies in Asia, they’re our allies. The United States has invested a lot in their development, and I think that over time, that set of relationships has really brought such prosperity to the entire region and it’s something that is really worth working for going forward.

Do you think Japan will be able to safely and successfully host the postponed 2020 Summer Olympics this July?

I just hope, more than anything—they’ve put so much into it, and if there’s any country that can get highly organized and accomplish a goal and all work together, it’s Japan. I’m really hoping for great success, I think it would be so inspiring for the whole world, so I really hope that they can get the vaccine situation going and have a great Olympic celebration.

Racism in this country is terrible—it’s interwoven in the entire history of this country, it’s a challenge that we all need to solve going forward. Having spent time in Asia, I think it didn’t surprise me as much as it seemed to surprise people [in the U.S.], just because of the Asian American community being from so many different countries and cultures. But, I think that every single person in this country and all levels of government need to really work to address these problems at every level whether it’s school—elementary, middle school, college. Obviously, that’s not what we’re doing here today so I don’t have a short answer for you. This is something that requires individual self-examination as well as societal self-examination and I’m encouraged that it has come out into the open. I’m sorry that it’s a problem, but I think that one of the best things we do in this country is to bring our problems out in the open and then figure out how to address them at different levels. So, there’s many things we can do at different levels and I’m glad that our governments are really taking this front and center.

The article has been edited for clarity.