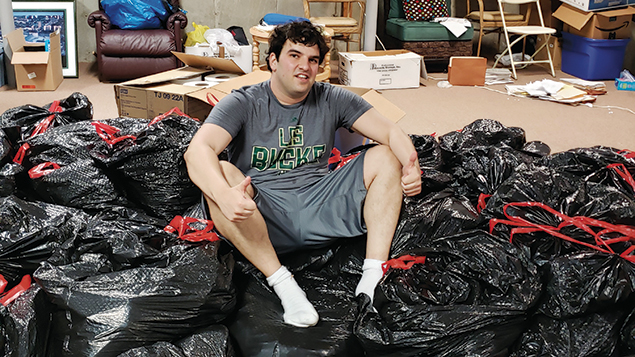 Vanderbilt alumnus Daniel Marks (B.A. ‘13) has been around basketball his entire life, and his four years on West End were no exception.

He went where few others have gone, working both as a student-manager for the Vanderbilt men’s basketball team and as a staff writer for The Vanderbilt Hustler. Marks experienced some of the Commodores’ greatest modern-day achievements, including what he tabs the best moment of his managerial career: defeating the Anthony Davis-led, No. 1-ranked, eventual NCAA Tournament-winning Kentucky Wildcats, giving Vanderbilt its first SEC Tournament title since 1951.

“The SEC Championship was definitely the highlight, and seeing three guys drafted in the 2012 NBA Draft—John Jenkins by the Hawks, Festus Ezeli by the Warriors and Jeff Taylor by the then-Bobcats—was just so cool,” Marks said. “But I would say the relationships I was able to make, the people I was able to experience those things with, the people I’m still in contact with, that may be the best part.

Years later, Marks’ basketball relationships have only strengthened, and his network has only grown. He serves as the Manager of Prospect Information for the Milwaukee Bucks, where he is responsible for scouting, evaluating and identifying collegiate talent, among other operational tasks.

Now, he’s using that extensive network for good, collecting unused toiletries and donating them to charity.

“Right now, there are 529.8 pounds worth of toiletries that have been sent to us to donate on our second distribution drive on April 27,” Marks told The Hustler. “But that doesn’t include a lot of programs that have taken the pledge and donated ten-plus pounds to local charities.”

TOTAL: 528.9 POUNDS of toiletry item donations from across the country. THANK YOU.

Why toiletries? Of course, they’re easy to access in an industry that frequently requires travel. But more importantly, toiletries, unlike food and other necessities, are not covered by food stamps, making them even more difficult for some to access. This growing need gave birth to Marks’ initiative, tabbed “Scouting and Scavenging,” which has blown up in the past calendar year.

Though the organization was launched in Jan. 2020, the idea came to him long before its formation.

“I had seen a tweet, I want to say it was five or six years ago,” Marks said. “I believe it was a Yankees beat writer, and they were talking about how they collected unused toiletries from all of the hotels they stayed in throughout the year, then donated it to a homeless shelter after the season.”

It wasn’t until the G League Showcase in Dec. 2019 that Marks followed suit, collecting toiletries of his own to give to charity. Slowly but surely, the initiative started growing.

“I thought to myself, ‘You know what? Let me do this myself and start collecting toiletries,’” he recalled. “‘Then, I’ll try to recruit some friends in the industry to do it, too.’”

He first created an Instagram page, where he’d post photos of people donating—college programs, coaches and professionals. Next, a Twitter account. Just as the pages started garnering attention, the COVID-19 pandemic hit, effectively eliminating travel and making it difficult for Marks to continue collecting.

He hardly saw the pandemic as a barrier. Rather, he saw it as a spike in need, coupled with a dangerous decline in accessibility—without hotel toiletries handy, he began fundraising to purchase the same items. The New Jersey native eventually delivered roughly 2,000 toiletry kits to a local charity last June, where he was joined by some collegiate coaches.

If the initiative was able to stay afloat at the height of the pandemic, Marks knew how much it could grow. Before the 2020-21 season began, he made calls to dozens of college programs, reaching programs in the Pac-12, Big 12 and ACC, both on the men’s and women’s side, and even contacted other NBA and G-League affiliates. He estimated that they had roughly 90 teams participating this past season.

“Then, I began to send them branded toiletry kits,” Marks said. “That helped grow our social media presence.”

Participating schools began submitting photos with their Scouting and Scavenging toiletry kits in various locations on campus, including on their home courts, in their practice facilities and more.

As Scouting and Scavenging continues to grow, Marks hopes that his alma mater will get involved, donating to local Nashville shelters at the conclusion of next season.

“I talked recently with Adell Harris, Vandy men’s basketball’s Chief of Staff, and she was all on board. She wants to get them involved next year,” he said. “And once coach Shea Ralph gets settled we’d love to touch base with her, and maybe even have a broader conversation with Candice Storey Lee about the entire department, getting all teams that travel to participate.”