Vanderbilt lacrosse bounced back on Sunday to beat Temple behind a great defensive performance. 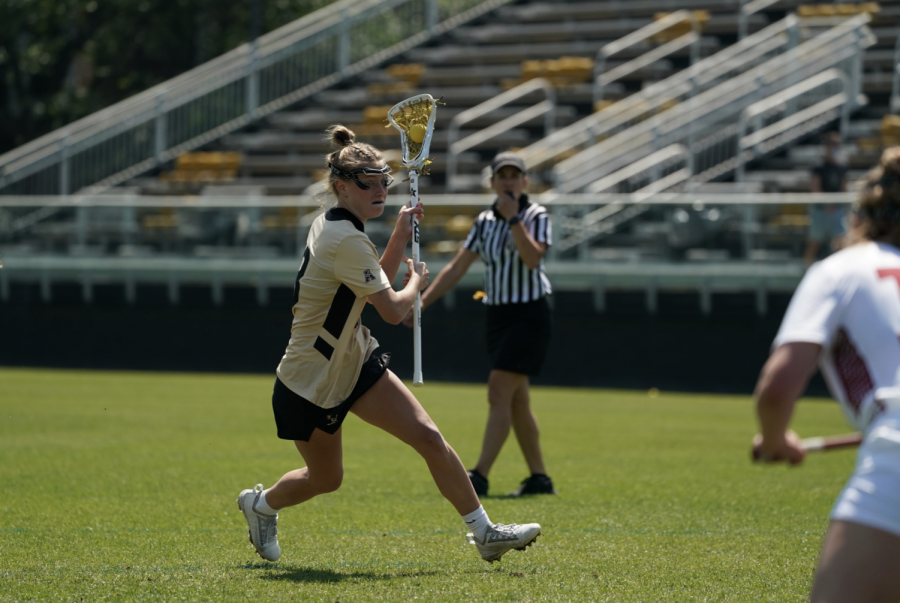 Nellie Blaze scores a goal against Temple on April 25, 2021. (Twitter/@VandyLacrosse)

Vanderbilt lacrosse faced off against Temple in the second of two games this weekend against the Owls. After dropping the first match 13-12, the Commodores bounced back on Sunday afternoon with an 11-6 victory, snapping a three-game losing streak.

From the starting whistle, Vanderbilt was put under immense pressure by Temple. Stout defense from the Commodores led to a sharp counter-attack where Gabby Fornia found a cutting Cassidy Orban, who scored her 19th goal of the season to put Vanderbilt up 1-0 in the sixth minute. Temple responded four minutes later with a goal from attacker Abaigeal Ryan to tie the game at 1-1. Temple goalkeeper Shana Hecht made two consecutive saves towards the middle of the first half to prevent the Commodores from taking the lead. After Temple pulled ahead 2-1, the Commodores had their equalizer called back due to a foul on Fornia with 13 minutes left in the first half.

The Commodores kept pushing forward towards the end of the first half but were repeatedly stopped by Hecht, who was excellent in net early with six saves in the first 20 minutes of the half. Vanderbilt finally broke through again with eight minutes left via a Callie Sunden goal to tie the game at 2 apiece. The Commodores built off of the momentum from that goal to score again two minutes later and take the lead asFornia netted her first goal of the game to go along with her two assists in the first half.

As the first half winded down, Vanderbilt continued to dominate possession in the midfield and look for scoring opportunities in the attacking third. A foul call led to a fastbreak opportunity for the Commodores, where Bri Gross scored her first goal of the game to put Vanderbilt up 4-2 with three minutes remaining in the first half. The Commodores came flying down the field out of the ensuing draw and scored their second goal in 18 seconds to go up 5-2 asOrban scored her second goal of the afternoon. The Commodores continued to pressure Temple in the last couple minutes of the half but could not break through, heading into the halftime break with a three-goal lead.

Vanderbilt came out of the locker room energized, with Fornia scoring her second goal of the game within the first minute of the second half to put the Commodores up 6-2. Temple looked to respond by upping the tempo, and cut the lead three minutes later after a promising look at net was capitalized by Abaigeal Ryan. Following the Ryan goal, Temple began to control the ball more and create scoring chances. Vanderbilt responded well to the pressure and orchestrated a great counter-attack which ended with a Nellie Blaze goal to put the Commodores up 7-3. Julie Schickling scored four minutes later for the Owls after an excellent cut through the middle of the Vanderbilt defense to chip away at the Commodore lead once again. Again, this goal was matched by the Commodores as Elizabeth Scarrone scored her first of the day to extend the Vanderbilt lead back to four goals at 8-4.

As the clock approached 20 minutes left in the game, Orban scored once again after she beat Temple defender Taylor Moncman in isolation. Up 9-4 with the clock ticking down, the Commodores began to hold more possession in the midfield. A couple Temple attacks were stymied by the Vanderbilt defense before the Owls finally broke through and scored to cut the lead to 9-5 with roughly 17 minutes left to play. Temple continued to apply pressure and earned a penalty shot with 16 minutes left in the second half, but it was turned away by the Vanderbilt keeper Paige Gunning with an incredible save. The ensuing Vanderbilt counter-attack ended with another Nellie Blaze goal to push the Commodores’ lead to 10-5.

With roughly 11 minutes left to play, Temple sophomore Belle Mastropietro was rewarded with a penalty shot after she was fouled following a great solo run, which she converted to shorten the Vanderbilt lead to four goals once again. Three excellent saves by Gunning with under 10 minutes left in the half prevented the Owls from inching any closer. Vanderbilt proceeded to hold possession in the closing minutes before scoring a goal with three seconds remaining and securing the 11-6 victory over the Temple Owls.

Looking forward, the Commodores will begin American Athletic Conference (AAC) Tournament play on May 6. After its conference tournament, Vanderbilt will play in the NCAA Tournament starting on May 14.