Jerry Stackhouse added his third transfer of the offseason on Monday with the commitment of former TCU forward Terren Frank. 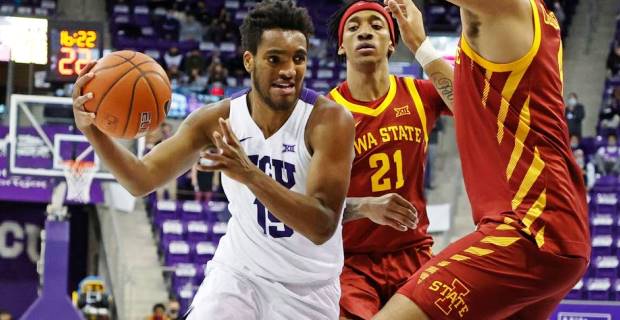 Terren Frank appeared in 14 games for the TCU Horned Frogs this past year. (TCU Athletics).

Former TCU forward Terren Frank announced via Twitter and Instagram Monday that he has committed to Jerry Stackhouse and the Vanderbilt Commodores. Frank, a 6’8″ freshman, played 14 games this year for the Horned Frogs while averaging 1.9 points and 0.9 rebounds per game on 41% shooting from the field and 38.5% shooting from beyond the arc.

Vanderbilt recruited Frank out of high school but he committed to TCU over the Commodores, USC and Arizona in Oct. 2019. The former three-star recruit in the class of 2020 played alongside Scotty Pippen Jr. in high school at Sierra Canyon in California.

Frank allegedly struggled with COVID-19 during his freshman season but figures to add key wing depth to the Commodores roster as he enters his sophomore year. In limited action for TCU, he showed an ability to space the floor from beyond the three point line and use his athleticism to rebound and defend in the paint. He will likely compete with current forwards Myles Stute and Jordan Wright for playing time this year and will have four years of eligibility remaining.

Frank marks Vanderbilt’s third transfer commitment in the past week after Stackhouse landed former Minnesota big man Liam Robbins last Monday and former Dayton guard Rodney Chatman on Saturday. As of now, Vanderbilt does not have any open scholarships. If Pippen Jr. elects to remain in the NBA Draft, Stackhosue will have one more spot to fill heading into his third season on West End.