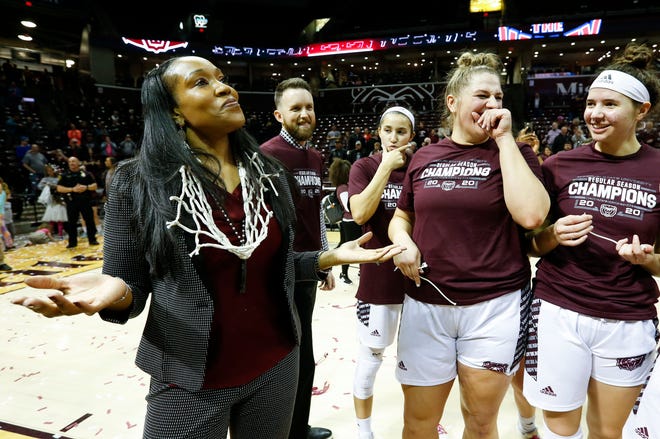 Over two months after Vanderbilt women’s basketball season ended early due to a shortage of players, the program is moving on from head coach Stephanie White.White had a 46–83 record in five seasons at the helm, but her disappointing 13–54 record in the SEC was a major reason why athletic director Candice Storey Lee wanted a change in leadership.

The program means a great deal to Lee, a former letterwinner on the women’s basketball team, and she will likely take time to make her hire as she did with her recent hire of football coach Clark Lea.

Listed below are 10 candidates, listed in no particular order, that Lee might  consider for the head coaching job, although she will certainly look at more candidates in her national search.

Missouri State was No. 20 in the nation in the last poll before the NCAA Tournament this season. Not bad for a second-year head coach in the Missouri Valley Conference. Agugua-Hamilton has led the program to a 49-7 record over the past two seasons, after the Bears lost 10 games in the season before she took charge. She earned Spalding Maggie Dixon Rookie Coach of the Year honors in her first season.

She has Power Five coaching experience as an assistant with Michigan State and Indiana. At Michigan State, she led recruiting for six years and earned four victories as interim head coach in 2017. Agugua-Hamilton is young at just 37 years old, which could be an advantage if Lee wants someone who can stay at Vanderbilt for the long run.

Brooks led the Bruins to their first NCAA tournament victory over Gonzaga just a few weeks ago, and that game should be top of mind for Lee when she calls him. In four seasons, Brooks has led Belmont to a 100-26 record and three NCAA Tournament appearances. The only season his team didn’t make the tournament was in 2019-20, when it was cancelled due to COVID-19.

In his first season at Belmont, Brooks won 31 games and beat Vanderbilt by 37 points. Before Belmont, he was an assistant at DePaul for 11 seasons. He coached six WNBA draft picks at DePaul. Vanderbilt may not have to look far for a coach who can develop talent and win conference championships.

Another local choice, Insell has excelled in recruiting talent from Tennessee to build his program. The 2020-21 Vanderbilt women’s basketball team only had three players from the state. Tennessee and the rest of the Southeast are a hotbed for women’s basketball, so getting a head coach who understands the landscape is a plus.

In 16 seasons at MTSU, Insell has led the team to ten NCAA Tournament appearances and five WNITs. He was also able to develop talent, as he coached five All-Americans and four WNBA Draft picks.

If Vanderbilt wants a coach who can consistently take the Commodores to the postseason, Insell is the guy. He’s 69 years old, though, so he may not have the longevity of the younger coaches on this list.

Rounding out the Tennessee trio is McMillan, who has been the Skyhawks’ head coach for 12 years. He has six regular-season conference titles, including a title this past season, but his most recent NCAA Tournament appearance was in 2014. McMillan is well-regarded in the Ohio Valley Conference, and he’s won coach of the year in the conference four times.

He came to UT-Martin from the high school ranks and lacks the Power Five assistant coaching experience of many candidates on this list. However, it’s hard not to notice the success he’s had 150 miles from Vanderbilt.

If Lee wants to go the other direction and find someone who can recruit nationally to find players who are excited by the academic challenge of Vanderbilt, McLaughlin is a great fit. In 11 years at Penn, he holds a 199-123 record with three NCAA Tournament appearances and four Ivy League championships.

The Ivy League did not play this season due to COVID-19, so McLaughlin could be itching to coach again. The challenge of coaching in one of the best conferences in the SEC may excite him, too.

This really depends on if Clark-Heard thinks Vanderbilt is a better job than Cincinnati, which is a fair debate. She went 46-21 in her first two seasons with the Bearcats before a difficult season in 2020-21.

Clark-Heard was the head coach at Western Kentucky for six years before taking the Cincinnati job. She led the Hilltoppers to four NCAA Tournament appearances and 154 wins. As an assistant with Louisville, she handled recruiting and brought in some of the best classes in the nation. Clark-Heard is more than qualified for the Vanderbilt job, but the question is would she even want it?

Bond-White was in the running to be Duke’s head coach after last season, but Vanderbilt is a job that allows her to stay in the conference. In 18 years with the Aggies, Bond-White has built one of the most impressive programs in the country. The Aggies have made 15-straight NCAA Tournament appearances with her on the staff.

Bond-White is known as a great recruiter, something Vanderbilt needs not only to retain the remaining talent on its roster amidst an exodus of starters to the transfer portal, but also to rebuild the program over the next few years. She would be a great candidate for Vanderbilt if Lee is considering first-time head coaches.

Boyer is another candidate in the SEC, and she brings assistant experience under one of the nation’s best coaches in Dawn Staley. Boyer’s background is fascinating: she was an assistant at East Carolina, Miami and Virginia Tech before a ten-year stint as the head coach at Bradley.

She moved to the professional ranks as a head coach in the now-defunct ABL and an assistant coach in the WNBA. Boyer served as a volunteer assistant with the NBA’s Cleveland Cavaliers for a season before returning to college basketball for the 2002-03 season. She worked as an assistant coach at Temple for six seasons before joining Staley at South Carolina in 2008. Her breadth of experience could help her stand out in a coaching search.

This one may be a long shot, but if Lee wants to keep it in the Vanderbilt family, Earley is a fantastic choice. She played for the Commodores from 2001-05, and was an unanimous All-SEC first team honoree and an Associated Press All-American honorable mention. She led Vanderbilt to the Elite Eight in 2002 and Sweet Sixteen appearances in 2004 and 2005. Earley knows the heights this program can reach because she took the team there herself.

Earley has been the defensive coordinator and post specialist for the Nittany Lions for the past two seasons. She has experience in both roles at Northern Kentucky and Vanderbilt. She hasn’t had the broader associate head coach experience that other candidates on this list have, but as an alumna of the program, she would want to bring Vanderbilt back to the NCAA Tournament.

Reed is a turnaround artist, but it may be difficult for Lee to poach the young Jackson native from her hometown program. Before she was hired, Jackson State was a fifth-place team in the SWAC. Reed led the Jaguars to a regular-season championship in her second season. She repeated the championship this year and capped it off with an NCAA Tournament appearance as a No. 15 seed.

Her first head coaching job was at Hinds Community College, which went 2-65 in the three seasons before she got there. She led the program to 47 wins in three years at the helm. Part of her turnaround skills revolve around her excellent recruiting. Reed served as an assistant coach and recruiting coordinator at Southern Miss, Louisiana Tech, Louisiana-Lafayette and New Orleans. She can recruit at any level, and with all of her career in the South, she knows the immediate recruiting area well.