On March 23, Joseph Samuels spoke about his experience living in Iraq as a survivor of the 1941 Farhud Massacre in a Holocaust Lecture Series event. 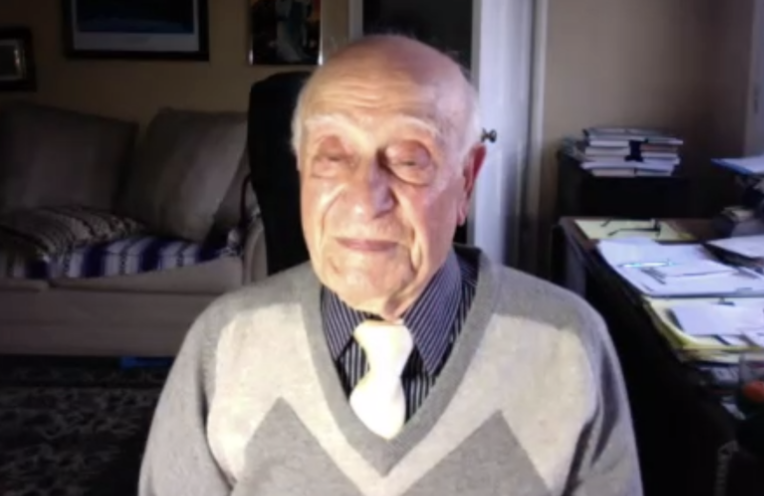 On March 23, Joseph Samuels gave a lecture titled “The Farhud Massacre & the Jews of Baghdad: Through the Eyes of A Child Survivor” as part of the Holocaust Lecture Series. The event was attended by 70 people and is the second event in the 2021-22 academic year.

Senior Olivia Sinrich, student chair of the Holocaust Lecture Series, invited Samuels to speak to diversify the perspectives offered, providing audience members with insight from someone who endured the Holocaust outside of Europe.

“It was a personal goal of mine to expand the scope of the Holocaust and who we typically think of as affected by it, specifically Jews of the Middle East and Africa,” Sinrich said.

Samuels began the lecture by giving a brief history of the Jewish people, particularly those living in Iraq during World War II. He then detailed his experience in Iraq during the Farhud Massacre of 1941.

Samuels said that the Farhud Massacre consisted of a pro-Nazi mob looting Jewish-owned homes and businesses and killing at least 179 people of the Jewish faith, per Samuels.

“The official report of the Farhud said that 179 Jews were murdered and 400 injured,” Samuels said. “But Jewish sources say there were at least 400 murdered and 1,000 injured.”

Samuels said that his family had moved away from the Jewish quarter of Baghdad in 1940, the year prior to the massacre, allowing them to escape most of the violence of the Farhud. His family learned about the massacre from the radio and his brother, who witnessed the horrors of the event

“As he drove through the main street, he immediately turned back, crying,” Samuels said. “He saw the bodies, the bloodbath.”

Per Samuels, his family and their neighbors took precautions to protect themselves if the mob came to their homes. When he was only ten years old, Samuels remembers taking boiling water to the roof to pour onto looters that attempted to enter the house.

“Although I put on a stoic face, it didn’t help because every night I went home and I was crying, thinking that this is our end,” Samuels said.

Samuels added that a number of Muslims living in Iraq during the massacre risked their own lives to protect their Jewish friends and neighbors.

“During the Farhud, there were some brave and righteous Muslims that stood in front of [the homes of their Jewish] friends with guns and daggers to prevent the mob from breaking in,” Samuels said. “Without them, the tragedy would have been much more magnified.”

Samuels said that even though he and his family had survived the massacre, the pain of the event was far from over.

This feeling motivated him to want to live in the U.S., where he was accepted to three universities, Samuels said. However, he said that the Iraqi government prevented his departure by asking for a high fee in order to leave the country. As a result, Samuels instead travelled with smugglers to Israel where he joined the navy after living in a refugee camp.

After Samuels’s lecture, the event opened up to questions from the audience regarding his experience living in Iraq and his faith.

When asked about how his experience differed from that of those forced into concentration camps in Europe, Samuels said that he did not receive much information about the Holocaust when he was living in Baghdad. In hindsight, he feels luck to have only faced Nazi supporters for a limited period of time.

“We are fortunate that we lost everything, but we kept our lives,” Samuels said.

Samuels then spoke about his feelings about Iraq after being away from it for most of his life.

“I have two contradictory feelings,” Samuels said. “One is sadness. I left my home, my culture and beautiful memories. My other feeling is joy that I left all the pain and suffering.”

An audience member also asked Samuels how Judaism helped him during these years of pain. Samuels said that he lost his faith for a number of years after the massacre, but returned to it later in life. He added that he realized that it is important to celebrate every moment rather than living in the past.

“Every morning I pray to thank God for the moment, for the hour, for the day, for the life he bestowed in me,” Samuels said.

Samuels added that, though he chooses not to dwell in the past, he finds it important to remember what has happened in order to create a better future.

“Remembering the past is essential to building a healthy future,” Samuels said.

The Holocaust Lecture Series will be the displaying an exhibit titled “Childhood Left at the Station: A Tribute to the Children of the Kindertransport” through March and April 2021. The exhibit is from the Los Angeles Museum of the Holocaust and can be found in Sarratt Gallery.