Difficult weather conditions led to a disappointing weekend for the Commodores in Athens. 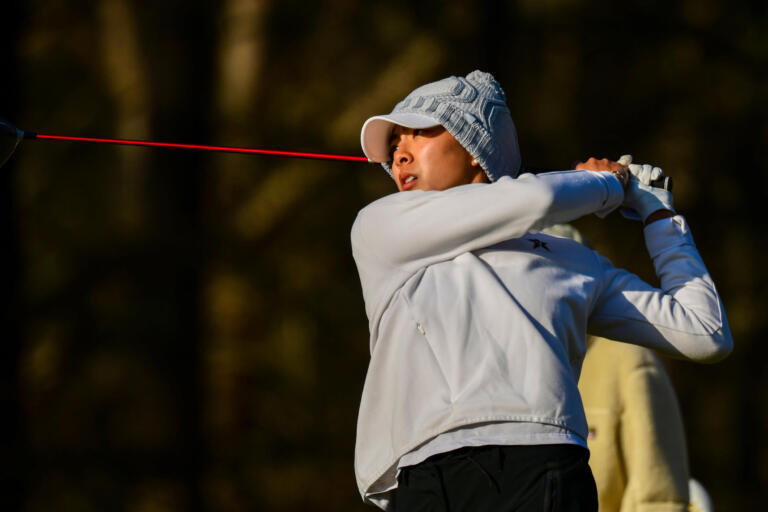 Vanderbilt during the Liz Murphey Collegiate Classic at the UGA Golf Course in Athens, Ga., on Saturday, March 20, 2021. (Photo by Rob Davis)

Following an encouraging performance at the Gamecock Intercollegiate, the Vanderbilt women’s golf team took a step back at the Liz Murphey Collegiate Classic, held from March 19-21. The Commodores finished tenth out of 18 teams in the tournament, which was hosted by the University of Georgia.

Strong rain and wind contributed to Vanderbilt’s struggles. Head coach Greg Allen pointed out that the players got a preview of what was to come during their practice round on Thursday.

“Just an unbelievable downpour for about 10 minutes. And almost comical, it was raining sideways so hard,” Allen said.

The weather proved especially challenging in the Commodores’ second round, as they shot a total score of 310 (+22), a mark 11 shots worse than their opening round. Allen was not pleased with the team’s inability to execute simple shots amidst the blustering conditions.

“We didn’t play very well, especially the second day. The conditions were tough. We weren’t very tough and we lost a lot of ground,” Allen said. “We just made—unfortunately—too many bad bogeys. A lot of three-putts, a lot of routine up-and-downs that we turned into bogeys. And so that’s what I was frustrated with, that we made some bad bogeys, and we just didn’t handle the conditions very well.”

Nevertheless, the Commodores did not let a discouraging second round prevent them from finishing strong. Vanderbilt recovered on the third day of the tournament, closing with a final round score of 299 (+11).

“It was nice to see us bounce back a little bit on Sunday during the final round and make a little bit of a move up the leaderboard,“ Allen said. “I was very encouraged by the toughness we showed Sunday.”

Another highlight from the weekend was the team’s success on par threes, as Vanderbilt finished tied for fourth in par-three scoring. Allen credited associate head coach Emilie Meason with drawing on past experience to instruct the Commodores on the best approach to these holes.

“Emilie Meason was a four-time All-American at Georgia,” Allen said. “So that was her home golf course, and she spent a lot of time with the girls on those par threes. That’s why we played them well, because they listened to what she had to say.”

Sophomore Celina Sattelkau, junior Auston Kim and senior Louise Yu have been reliable for Vanderbilt all season. While Allen has been experimenting with different lineups throughout the season in order to find the best combination of players for the SEC Championship, he indicated that Sattelkau, Kim and Yu have shown that they should be playing in every tournament.

“One thing I feel very good about is having Auston, Celina and [Louise] in the lineup,” Allen said. “They have kind of risen above everything else that’s been going on this year and are playing the best golf right now and are showing some toughness.”

The Commodores’ next event is the LSU Tiger Golf Classic from April 6-7, their last before the SEC Championship. Allen hopes that some less-established players will have strong performances at the tournament, proving themselves worthy of being placed in the SEC Championship lineup alongside Sattelkau, Kim and Yu.

“We’re just looking for some momentum. We’re looking for somebody to step up in those last two spots and show some toughness, show some grit,” Allen said. “The good thing is we have players that can do it. It’s just a matter of doing it.”