GUEST EDITORIAL: Diversity without the inclusion 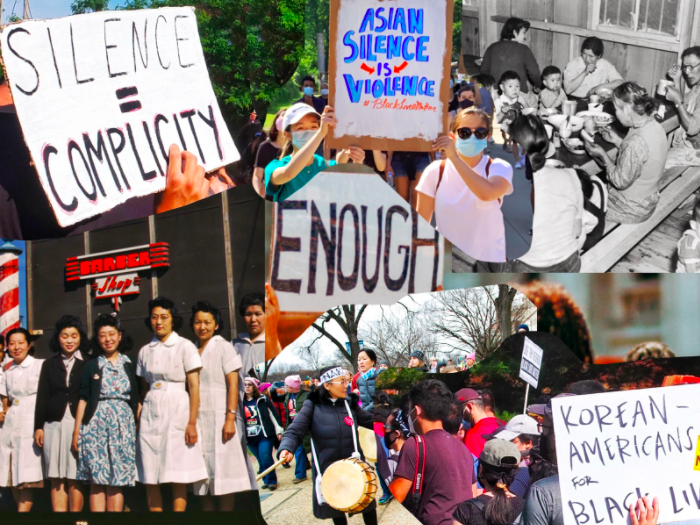 Collage made by Iris Kim. (Photos from Unsplash and courtesy of the Asian American Christian Collaborative)

Last Thursday, March 11, President Joe Biden denounced the thousands of racist assaults Asian Americans have faced since the start of the pandemic. “They’re forced to live in fear for their lives just walking down streets in America. It’s wrong. It’s un-American, and it must stop,” he declared.

Two days later, my friend texted me: He was walking to Commons along 21st Avenue with his head down and mask on, when a car screeched to a halt next to him, nearly causing the cars behind to crash into him. “Hey, Asian sh**!” the driver screamed, and then zoomed away.

Although often overlooked, anti-Asian racism has been ongoing and particularly harsh since the start of the pandemic. Media outlets have only recently highlighted attacks against Asian American elders after the violent death of 84-year-old Vicha Ratanapaktee, and within the last few days, the news of the shooting that killed eight people in Atlanta, six of whom were Asian women. But these injustices did not appear out of the blue. Because of racist stereotypes of Asians as carriers of the virus, one in four surveyed Asian American children have been bullied by their classmates, and nearly half of all Chinese restaurants in the U.S. closed down due to the dual pressures of consumer prejudice and financial constraints.

In the midst of these attacks against my community, Vanderbilt’s silence is deafening. The statement released yesterday was the first public response since their single-sentence statement one year ago. Chancellor Daniel Diermeier’s lack of response has been particularly harmful; reading his letter on celebrating “a year of unprecedented challenge and resilience” the morning after the shooting was a slap to the face for my grieving friends and family.

His clickbait title reminded me of the naive hope I held when attending the University’s widely-publicized “This Moment in America” panel on Feb. 24. A question regarding the rise in violence against Asian Americans was asked three times during the ninety minutes, but, much to my disappointment, it was largely evaded by panelists and ultimately did not even make it into the panel highlights.

Should I even be surprised, though? After four years at Vanderbilt, I can say that Asian American community has been overlooked by university administration and students alike. There is a lack of awareness surrounding the topic of pandemic racism because there is no public discussion about, or course offerings on how the Asian American figure has been formed by the United States’ history of racialization and empire. Asian American advocacy programming at this school has largely come from a single student-run organization, but we should not be paying $70,000 a year to teach ourselves about our own history.

Vanderbilt AsAm Studies Initiative’s full statement can be found here, and we invite all who stand in solidarity with us to sign your name and share the statement in your own personal and organizational networks.

To my Asian and Asian American friends, family and allies: Now more than ever, we need to learn our own stories. We need to know how the term “Yellow Peril” originated, why Asians were scapegoated as the harbingers of disease and crammed into dark, unsanitary conditions that later became our Chinatowns, how our communities fought alongside Black and Brown activists in the 60s and how we fell into the socially constructed “model minority” myth. It’s only when we recognize our place and ties to Asians in American history that we can be empowered to stand for justice in this current moment—not only for our own communities but for all people of color.

I am only nine weeks away from graduating. Part of me was tempted to stay silent and walk away—to just walk across the stage, elbow-bump Diermeier and forget about these four years I spent feeling like I did not belong. But after witnessing the injustices of the past year and hearing my friends wrestle with the same questions about their identity, I cannot sit back and pretend that time will heal all wounds.

If 2020 has taught me anything, it’s that there is never a convenient time for change. But there is always time to do what is right.