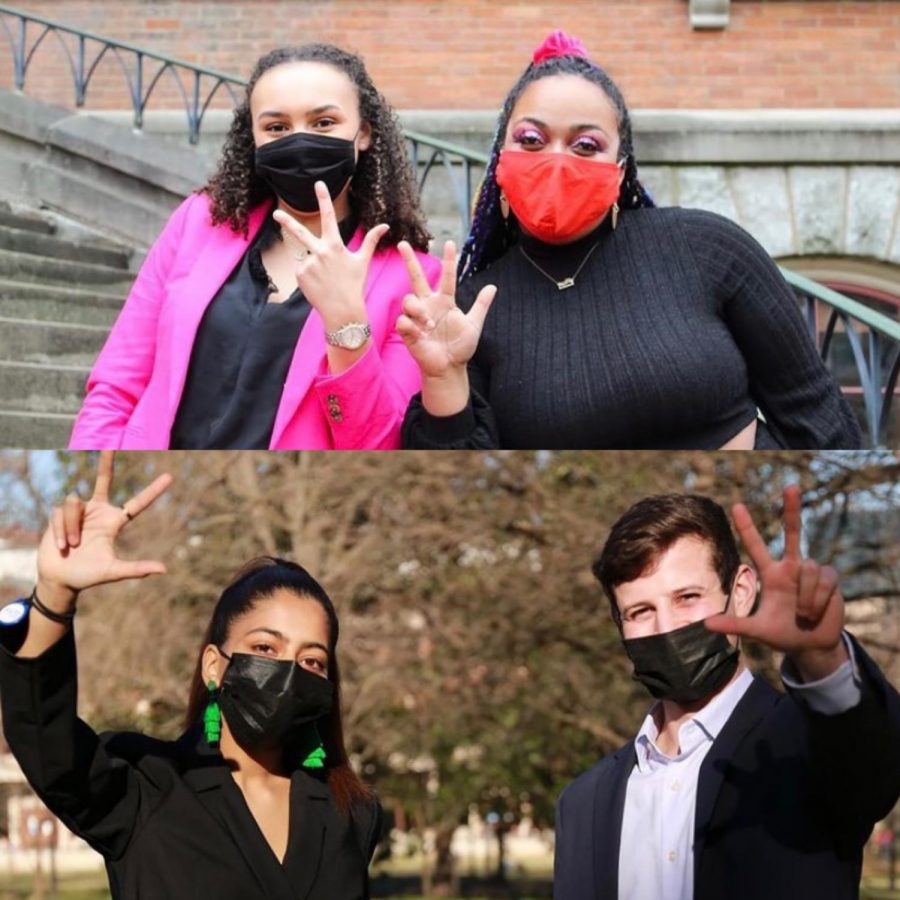 The voting period has been extended from 24 hours to 54 hours this year. Jay Patel, VSG elections commissioner, said that this change was made to combat anticipated decreased voter turnout due to COVID-19.

“I believe this [change] will mitigate the impact of the coronavirus by enabling students from all time zones to have an adequate amount of time to make a decision, learn that the voting period has opened and cast their vote,” Patel said.

Additionally, in contrast with previous elections, there will not be primary elections this year.

Veer Shah, senior and current VSG president, stated that he will not be endorsing either ticket.

“I don’t think it is my place as President to endorse a ticket, especially since I work with all of them,” Shah said. “I think both tickets are great this year and I wish them both luck!”

Shun Ahmed, junior and current VSG vice president, chose not to run for reelection due to personal reasons and family commitments. She urges students to choose their next leaders with a progressive mindset while bearing in mind the welfare of the entire student body.

“Get someone who will challenge administration and challenge the status quo of VSG,” Ahmed said. “It’s a turning point in Vanderbilt’s history, and don’t let the next administration stop it.”

Bruns, a junior studying history, is the current vice chair of VSG’s Environmental Affairs Committee and a former senator of the East and Memorial Houses and Branscomb Quadrangle. Passionate about sustainability, Bruns co-wrote a resolution to recognize DivestVU and Fossil Free SEC, while also organizing a virtual pop-up thrift shop. As senator, she helped to write eight important resolutions that focused on issues pertaining to campus safety, social rights and sustainability.

Prowell, a sophomore double-majoring in neuroscience and psychology and double-minoring in French and chemistry, currently serves as a VSG senator.

In running for president and vice president, Bruns and Prowell hope to amplify every student’s voice to the fullest potential. With regard to important topics on campus, the two are strong supporters of the “Dores Divest” movement. The ticket has not immediately responded to The Hustler’s request for comment about their stance on the Abolish Greek Life (AGL) movement.

“Our main purpose is to represent the voice of the student body, especially for students who feel like they are continually not heard,” Bruns said. “Over the past year, things were immensely difficult [for so many students], and we want to focus on how we can better advocate for every student on this campus despite his or her race, background and situation.”

Prowell expressed her desire to change what needs to be changed immediately around campus.

“I’ve heard that some of the handicapped buttons don’t work, and I couldn’t help but think to myself, ‘Why hasn’t anyone started an initiative on this?’” Prowell said. “We all hear about things that haven’t been fixed for such a long time. If not now, then when? If not us, then who?”.

Prowell and Bruns will make strides to extend their campaign to the greater Nashville community.

“If Kayla and I are elected, we would be the first all-female and all-Black ticket. This would mean that little Black children in Nashville and beyond would be able to look at Vanderbilt, a top-tier university, and realize that not only are students of color and marginalized background attending this university, but that they are also leaders,” Bruns said.

Bruns and Prowell are running for election with a five-pronged platform, “It’s Our Time,” which aims to improve campus equitability, sustainability, safety, community and academics.

Campus equitability, the first component of this ticket’s platform, promotes inclusivity and increased access to campus resources for all students. Major focus points include free menstrual products in all women’s restrooms, renaming Calhoun Hall, Garland Hall, McTyeire House and Elliston Hall due to their historical ties, restructuring AXLE to include a cultural studies class and giving 10 percent of VSG’s yearly budget surplus back to the student body.

The second prong of the ticket’s platform focuses on sustainability on campus. One initiative is the implementation of campus-wide thrift shops where students can find low-cost clothing.

“Especially when the snow hit, we observed that many students did not have the proper clothing to keep warm, and this should not have been the case,” Prowell said.

If elected, Prowell and Bruns also plan to encourage administration to divest from fossil fuels, reinvest in clean energy, place compost bins around campus and require that every student completes a sustainability module.

The pair also strives to make Vanderbilt a safer campus. Among reinstating in-person wellness programs to the Recreation and Wellness Center and adding brighter light bulbs to the lamps around campus, Prowell and Bruns want to ensure that each student is required to complete by-stander intervention training every year.

“As a woman, there are many instances where I do not feel comfortable walking around campus, and this needs to change,” Prowell said.

The two also plan to support Next Steps by ensuring the University Counseling Center (UCC) is accessible to those individuals in the program.

“With these universities, we can hold joint days of service and activism. In this way, we can make sure that we are giving back to the greater Nashville community,” Bruns said.

Lastly, the pair intends to pursue improvements with regard to Vanderbilt’s academics. While supporting organizations that aim to create new majors and minors, the two stated that they strive to ensure increased accessibility to pre-professional advising. Additionally, Prowell and Bruns say they will make every effort to make certain that students’ voices are heard when faculty and administration make decisions that will ultimately affect them.

As the last main point of the ticket’s campaign, Bruns and Prowell will be collaborating with the Academic Affairs Committee to add to the VSG’s Universal Test Bank.

In running for president and vice president, Bruns and Prowell hope to amplify every student’s voice to the fullest potential.

“Our main purpose is to represent the voice of the student body, especially for students who feel like they are continually not heard,” Bruns said. “Over the past year, things were immensely difficult [for so many students], and we want to focus on how we can better advocate for every student on this campus despite his or her race, background and situation.”

Gould, a junior and human and organizational development (HOD) major, currently serves as the VSG chair of Economic Inclusivity. He helped to develop the Adriel Bineza Graduate School Equity Fund, spearheaded the initiative to make laundry free for all on-campus students and worked to handle the recent winter housing emergency.

Mittal, a sophomore and HOD, medicine, health and society (MHS) and Spanish triple-major, was formerly chair of Student Health and Wellness and is currently executive assistant in the VSG Cabinet. She said that the strides of those around her inspired her to run for vice president with the hopes of empowering others, particularly those of marginalized groups.

Gould and Mittal’s “We Hear You Vanderbilt” campaign consists of a platform abbreviated COPE: Connection, Opportunity, Pride and Equity. “Connection,” the first prong of their platform, focuses on increasing understanding and acceptance of diverse cultures at Vanderbilt, a historically inequitable institution, per Gould.

They stated that, if elected, they plan to work with Greek leaders to increase socioeconomic inclusivity within Greek life and allocate more community spaces on campus besides Greek houses.

Despite this, Gould and Mittal do not support the AGL movement. Gould is a member of the Vanderbilt Alpha Psi chapter of Sigma Chi fraternity, and Mittal is a former Panhellenic member.

“Every issue that AGL identified with Greek life, from sexual assault to homophobia to sexism to racism—they are all real. They are all valid, and I have seen them firsthand,” Gould said. “With that being said, Greek life is an area of campus that represents a community. I do not plan to uproot any existing communities that support students and their mental health.”

As part of their focus of connection, Gould and Mittal emphasized how decisions made for the 2020-21 school year may not have prioritized students’ mental health and social connections. They highlighted their priority of ensuring that everyone can find their home at Vanderbilt, especially amidst campus-wide feelings of isolation due to COVID-19.

“It was really disheartening for me to see the state of the Vanderbilt community,” Gould said. “When you’re staring at those four walls as a freshman, it’s easy to spend an entire day in a little box, and that feels more like prison than home.”

Gould stated that, if elected, he and Mittal would work with administration to better support students, especially during times of crisis, and increase communication between students, VSG and Vanderbilt leaders.

“It’s really tough for students to not have that transparency and clarity with what admin is thinking in their decisions,” Gould said.

Similarly, the “Opportunity” part of their platform encompasses how, if elected, Gould and Mittal aim to narrow the gap between people of different socioeconomic backgrounds. Specifically, they strive to close the financial disparities between students and ensure equal access to exploring post-graduate opportunities and joining student organizations.

“Eliminating this gap is the key to creating a campus where people are able to interact regardless of socioeconomic status, where everyone has the choice to join any organization, any experience, they want to, where everyone can explore unpaid internships,” Gould said. “I’ve worked on this as Financial Inclusivity Chair for many issues, such as with graduate school admissions tests.”

“Pride,” the third component of Gould and Mittal’s platform, highlights their intention to make Vanderbilt a place that people are proud to call their own.

“It’s about having a community where we feel like we are at the cutting edge of environmental change, human rights change and of changing the way that this country treats incarcerated people,” Gould said.

The final piece of Gould and Mittal’s platform is “Environmentalism.” The team pledges to work to create a better and more sustainable Vanderbilt, specifically referencing ways to combat the lack of plastic recycling plants in Nashville.

“It’s not okay to be profiting off of destroying the environment, to say high amounts of food waste is acceptable or to allow greenhouse gas emissions to carry on,” Gould said. “Let’s switch to aluminum products and safely recycle aluminum, which would be a self-paid-for venture because the government pays for aluminum cans.”

The pair also mentioned partnering with Divest VU and Dores Divest to achieve these goals.

“We’re looking at ways to support Divest VU and Dores Divest, especially helping them to spread composting bins across campus—all dorms and all dining halls—and working with them to expand the use of bamboo and reusable cutlery,” Gould said.

Overall, Gould and Mittal expressed that, if elected, they pledge themselves to making Vanderbilt a better place for all students.

“Our main priority is to take care of the people we’re leading,” Gould said.