Gonzalez and Davis stood out at the plate while Bradfield Jr. excelled on the basepaths. 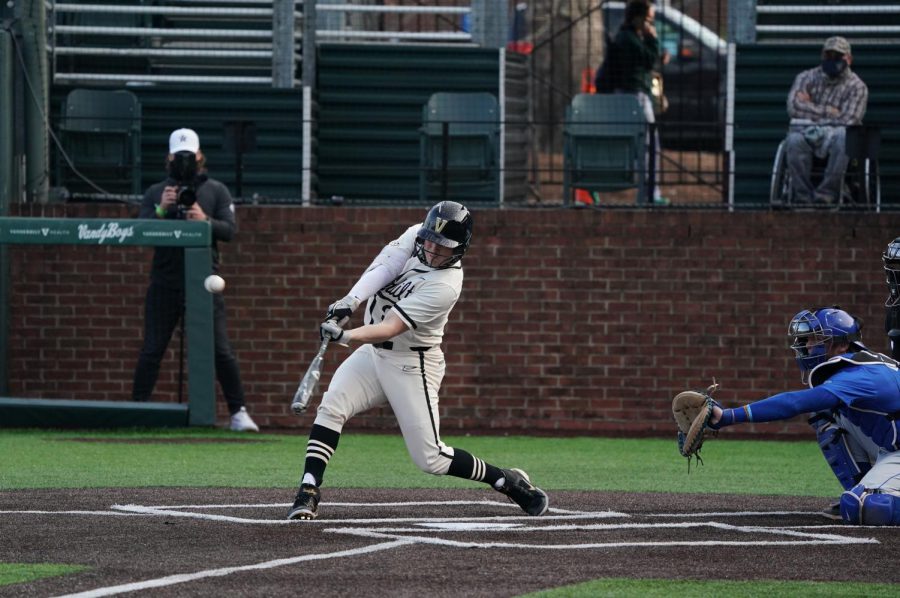 The Vanderbilt Commodores played host to the  Memphis Tigers on Tuesday, March 9, ultimately defeating their in-state, nonconference foes 10-4. The Tigers traveled the three hours up I-40 to face the red-hot Commodores for a one-off game at Hawkins Field. The game was blemished by mistakes and blunders, with both sides recording two errors apiece.

Other than the moonshot by senior left fielder Cooper Davis in the top of the first, the Commodores utilized a lot of “small ball” hitting, poking grounders around the infield and forcing the defense to make plays. The VandyBoys also showed off their baserunning talents, with freshman center fielder Enrique Bradfield Jr. stealing three of the team’s four stolen bases.

Vanderbilt’s Christian Little started on the bump for the Commodores but found himself in trouble early in the top of the first. He was able to strike out the leadoff hitter, but loaded the bases for Memphis. After a visit to the mound by Coach Corbin, the Commodore defense came to the rescue and turned a double play to keep the game 0-0.

Davis, batting with the cage on his helmet after an early-season face injury, answered the Tigers’ early challenge with a swift rebuke as he blasted a solo home run to straight away centerfield. The leadoff hitter’s first home run of the year—and first of his career—would be the only damage done in the first inning, although junior right fielder Isaiah Thomas bunted down the third base line for a base hit, and sophomore catcher CJ Rodriquez drew a late walk.

In the second inning, Little seemed to settle in, striking out two and maintaining the 1-0 score.

The Vanderbilt offense then took over. Junior second baseman Tate Kolwyck reached third base after a grounder to shortstop resulted in a throwing error into the dugout, which moved Kolwyck into scoring position. The Memphis pitcher then balked, moving Kolwyck to third. This setup Bradfield Jr. to drive in Kolwyck with a grounder to first that was fumbled by the fielder. Davis got his second RBI of the game as he brought in Bradfield Jr. with a dribbler to second base, extending the lead to 3-0.

Memphis responded in the top of the third, putting runners on the corners after two outfield singles. A sacrifice fly brought in one run, before an outfield single brought in another. Corbin visited the mound twice during the inning and Little was eventually replaced by freshman Patrick Reilly. Little finished the day with two and two-thirds innings pitched and four strikeouts but he walked three batters and gave up four hits and two earned runs. Memphis tied the game with another RBI single, but Reilly bounced back with a four-pitch strikeout to retire the side.

Vanderbilt scratched a run across in the fourth, thanks to a senior third baseman Jayson Gonzalez scorcher past the first baseman that scored Bradfield Jr. While they were able to retake the lead, the VandyBoys left the bases loaded to end the inning.

Reilly hit his stride in the fifth, striking out two. The offense aided their freshman reliever, as Gonzalez stroked a two-RBI triple to right center and Davis recorded his third RBI of the game with a single up the middle, making it a 7-3 Vanderbilt lead.

While Memphis was unable to capitalize on a Commodore error in the sixth, Vanderbilt took advantage of several Tiger fielding mistakes to extend the lead to 9-3. A run scored after the Memphis pitcher fielded a three-footer and held it, seemingly forgetting the bases were loaded before a throw from the shortstop brought the first baseman off the bag which scored another.

Reilly was replaced by freshman Miles Garrett in the seventh. He demonstrated great command throughout his outing and the ability to battle back from hitters’ counts. Reilly finished the day with four strikeouts and zero walks through three and a third inning. He also earned his first ever collegiate win.

“He was really efficient,” Corbin said of Reilly.“He really attacked the strike zone. He was kind of the difference in the game, especially with those two bases loaded situations.”

A Commodore error allowed a Tiger run to score as Garrett struggled from the get-go, loading the bases and hitting a batter. While Memphis put a dent in the deficit, Garrett worked out of the jam with two strikeouts.

Offsetting the progress made by Memphis, an RBI double by Thomas returned the Commodore lead to six runs in the bottom of the seventh.

Garrett was replaced by senior Hugh Fisher in the top of the eighth. In his third appearance since undergoing Tommy John surgery in August 2019, he gave up no hits and struck a batter out.

Other than a Bradfield Jr. stolen base, the bottom of the eighth was fruitless for the VandyBoys.

Sophomore Chris McElvain was brought in to close out the game for Vanderbilt. He gave up a hit and two walks but struck out two to escape with the bases loaded.

All in all, the final score showed Vanderbilt on top, overcoming the visiting Memphis Tigers 10-4.

The VandyBoys will be back in action against Oklahoma State as the Commodores travel to Stillwater for their first ranked match-up of the season in a three-game series starting Friday March 12.