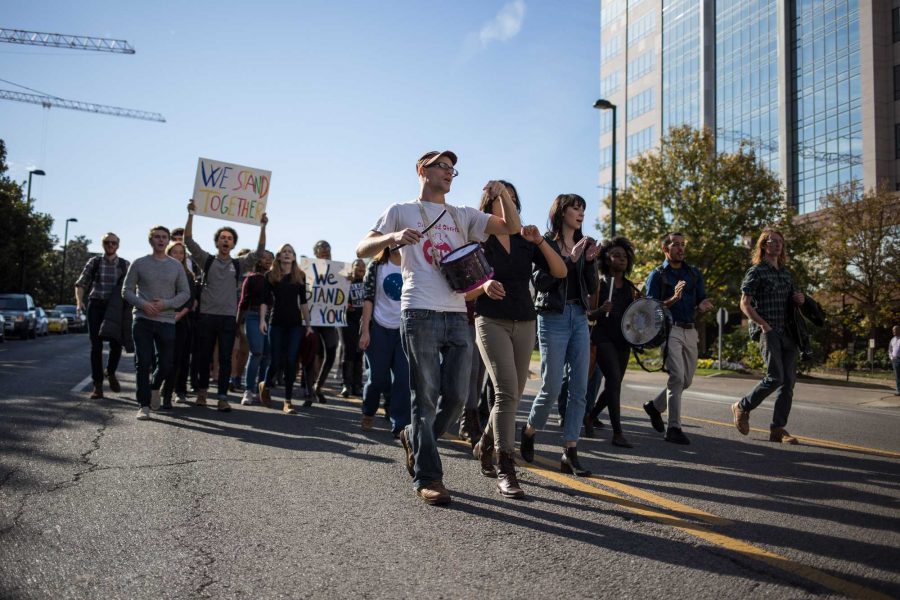 Last semester, Vanderbilt Student Government took on the task of updating the university’s Protest and Dissent Policy and Statement of Principles. After a monthly meeting with the chair of the faculty senate in October, VSG Speaker of the Senate Damonta Morgan and President Ariana Fowler decided that the policies needed to be revised to align with what is currently being done at Vanderbilt.

The Protest and Dissent policy is a section of the Vanderbilt Student Handbook, which is updated each summer for each academic year. The Statement of Principles is mentioned in the Student Handbook, but is contained in the Faculty Manual. However, because it is so student-facing, the Dean of Students asked that VSG be the ones to lead the effort to revise it.

Morgan spearheaded the initiative and organized three one-hour focus groups, each comprised of eight to nine anonymous students, to provide input on both of the policies. To recruit students for the groups, Morgan emailed student leaders across campus through AnchorLink and individually reached out to organizations such as the Black Cultural Center, the Multicultural Leadership Council and the College Republicans and Democrats. Morgan emphasized that he went out of his way to include all political ideologies on campus.

“We wanted to make sure that we had that perspective because we understand that at Vanderbilt, like the Hustler does a thing every year on political ideology, and it’s about half but those students [who report that they identify as Republicans] don’t speak up and so we want to make sure that we have reached out to them specifically,” Morgan said.

Before the focus groups met in late November, Morgan sent the students who volunteered to participate several freedom of expression statements and principle statements from other peer institutions to review for inspiration.

Once the focus groups met, they came up with edits to both of the policies and compiled those into a report, which Morgan passed along to the faculty senate Strategic Planning and Academic Freedom Task Force. After receiving feedback from the committee, Morgan is circulating the revised report back around to various campus leaders to review, and he plans on convening another focus group within the next couple of weeks to make sure that students approve of the final conclusions in the report. Finally, VSG will present the report to the faculty senate in early March, and if they approve, it will be given to the Dean of Students office and Board of Trust to review as they are updating the faculty and student handbook this summer.

“I think the most poignant thing is that these things don’t change very often, and these are, when you go into Student Accountability and you have a violation, these are the documents that they look at,” Morgan added. “Because we have a community creed and a Student Statement of Principles, and students are supposed to read these things and as a member of Vanderbilt, as a citizen of the university, these are things that we all agree to uphold.”

Here are five key takeaways from the proposed changes to the policies. The first point pertains to the Protest and Dissent Policy, while the next four pertain to the Statement of Principles.

The current protest and dissent policy begins by stating prohibited forms of protest, such as “protest or dissent that is disruptive action or disorderly conduct, particularly that which obstructs or disrupts teaching, administration, University procedures and activities, or other authorized activities on University premises, including programs, events, meetings, or speakers hosted by student organizations, departments, offices, or other entities”. The policy continues by listing acceptable forms of protest and dissent, such as “picketing, distributing literature, silent or symbolic protests (e.g., holding signs, wearing certain clothing, standing, etc.), or short and spontaneous verbal reactions to an event, as long as they do not block, obstruct, or impede, among other things, access to a meeting or activity, passage of persons or vehicles, the audience’s view or ability to pay attention, and/or the speaker’s communication or ability to speak.” The report suggests that the order be switched so that the acceptable forms of protest come first.

“Basically we wanted to change the wording to say that these are good ways to go about it and these are things that are strictly prohibited, if that makes sense,” Morgan said.

Additionally, the revised policy removes the phrase “that is disruptive action or disorderly conduct” which describes prohibited forms of protest and dissent.

“[The administration understands] that protest is meant to be disruptive, and protest is not always silent. Protest is meant to bring about change, and they understand that that’s a necessary part of achieving our long term goal of more equality and equity for all. They don’t want to shut down protests but they want to make sure that our primary goal, which is to act as an academic institution and facilitate learning and discovery, is not hindered by protests,” Morgan said.

The Statement of Principles report is in favor of combining the current sections of the Statement of Principles labeled Counseling & Health and Safety into one section called “Wellbeing.” Additionally, the focus groups and authors of the report found it problematic that neither of these sections mention a student’s right or a student’s ability to get access to qualified health professionals, including mental health resources.

“One of the things we thought was important is that we expect to have access to quality healthcare professionals,” Morgan said. “And because we opened a Center for Student Wellbeing on campus we thought that the nomenclature should remain the same, so we changed the title to Wellbeing for that section.”

The report recommends that the new section read:

“The University is committed to the physical and mental well-being and dignity of its members. It will provide support and guidance for students as they make academic, career, and personal choices. Accordingly, it will provide access to qualified professionals, safe facilities, a secure campus, and responsible regulations designed to protect the health and safety of all its members.”

Inspired by University of Pennsylvania’s Principles of Responsible Conduct, the students involved felt as though the current nondiscrimination section of the Statement of Principles was “too passive” and “lacked specificity.” The current statement reads: “The University is committed not to discriminate on the basis of unlawful criteria in its policies, practices, programs, and activities.”

“The [current] document’s very passive,” Morgan said. “The university doesn’t have much of a responsibility in terms of taking an active stance on something and being proactive instead of reactive. One of the things that we wanted to change is making the document more active, and saying that we as a university stand for this, this and this and when this is violated there will be some type of redress for that situation. I think that’s more clearly seen in the nondiscrimination section. Previously it was like two sentences, but we extended it to say that these are groups that are protected on our campus, and that way if something harms them, we as a university protect them.”

“The University is committed not to discriminate on the basis of unlawful criteria, including race, creed, color, ethnicity, national origin, religion, sex, sexual orientation, gender expression, age, height, weight, physical or mental ability, veteran status, military obligations, and marital status. It will strive to provide education for students with regard to antidiscrimination and intervene when it sees discriminatory acts.”

The students recommended expanding upon the current Open Inquiry section of the report to include a reference to the University’s stance on safe spaces as well as an express disapproval of hate speech. The new section, inspired by the corresponding ones at the University of Chicago and Smith College reads:

“The University is committed to providing opportunities for the free and open exchange of ideas both inside and outside the classroom. The University respects the idea of a safe space, but also provides the space to disagree and dissent. It will safeguard the undisturbed, orderly expression of diverse views and opinions as well as the opportunity for their careful examination. The University does not protect speech that is defamatory, harassing, threatening or invades privacy.”

While the name of this section in the current Statement of Student Principles is titled “Open Communication,” the discussion surrounding this topic during the focus groups was focused on transparency, which the students felt was a better name for the section.

“Often long and drawn out in excessively wordy emails (or attached documents) or press releases, most official policies are inaccessible to students because they are not easily readable,” the report reads. “Students want policy changes to be effective, concise and accessible in University communications. This means relaying information in a succinct manner.”