Dores Divest’s 14-foot-mystical creature, an orange unicorn, made an appearance on Library Lawn at 2 p.m. CST and marched with students to Kirkland Hall. 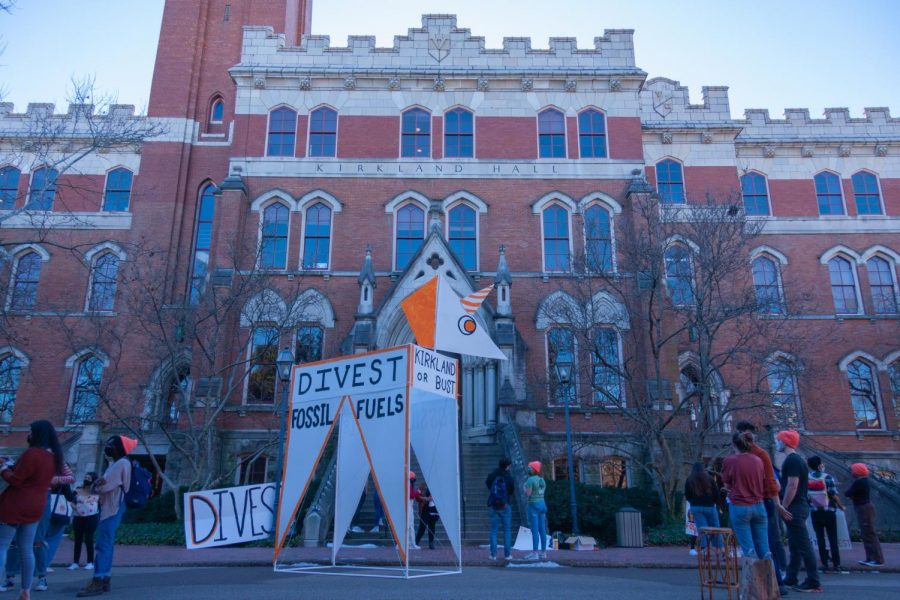 CORRECTION: This article has been updated to reflect Ember Tharpe’s position as senior advisor of Hidden Dores. An earlier version article said she was Hidden Dores President, however, Tharpe was president last year and is now a senior advisor.

DivestVU and Dores Divest held an approximately 30-person protest today from 2:15 to 3 p.m. CST. The protestors marched from Library Lawn to Kirkland Circle in support of divestment of the university endowment from fossil fuels.

The Graduate Student Council (GSC) and Vanderbilt Student Government (VSG) have both passed resolutions supporting divestment from fossil fuels and had representatives at the demonstration.

The march began at approximately 2:15 p.m. CST on Library Lawn. Members of Dores Divest erected a 14-foot tall unicorn painted orange, which the organization called Danny. The unicorn’s front read “Kirkland or bust,” its sides read the words “Divest Fossil Fuels” and its rear read “-0.1% endow return.” The rear references the university’s 2020 Financial Report, which outlined the loss of 0.1 percent on its endowment return. Two marchers carried the unicorn to the sidewalk in front of Kirkland Hall— along the way, the head got snagged on a few tree branches.

Students who wished to participate in the march were required to sign up beforehand. The participation limit was 40 people, per DivestVU co-founder Emily Irigoyen. The protestors wore orange beanies, the national color for divestment, for identification purposes, per an anonymous Dores Divest member.

“This is one of the most time-sensitive issues you can get involved with on-campus,” first-year Christina Perez, who attended the march, said. “I think that Vanderbilt has all the resources that we need to go without fossil fuels, and I think it’s a right time for a call to action.”

Dores Divest undergraduate president Ben Hayden said organizers had to turn away over 200 students who expressed interest in protesting.

Senior Emma Geitner came to support the protest after she was unable to formally sign up to participate.

“I just think that it’s super important that you kind of put your money where your mouth is,” Geitner said. “Since Vanderbilt is still investing in fossil fuels it really doesn’t send the right message.”

As students marched, bagpipe music played from a portable speaker. Students also chanted, “What do we want? Divestment! When do we want it? Now!” and “Stand Up! Fight Back!” on their way to Kirkland Circle.

Speakers lined up on the steps of Kirkland Hall alongside a cardboard cutout of Al Gore wearing an orange beanie. The series began with a land acknowledgment, which Irigoyen stated had not been officially adopted by the university. The statement indicated that the land which Vanderbilt lies on was the ancestral homeland of Cherokee, Shawnee and other Native peoples that had been relocated through legislation. Tharpe, Guana and Fonongava’inga each stated in their speeches that the use of fossil fuels disproportionately affects communities of color, who often experience increased rates of disease as a result of climate change and suffer from inequitable distribution of relief following natural disasters exacerbated by climate change.

“How can you say you love Vanderbilt University and not fight against fossil fuels, which destroy the land of its people?” the ISO speech said.

Hayden expressed disdain for the university’s lack of response and stated that student activists on campus are held to higher standards of conduct than companies who “willfully vandalize the planet.” Vanderbilt’s continued investment in fossil fuels demonstrates Vanderbilt’s values more than any rhetoric could, Moravec said

Bruns, a former VSG Senator who served as the chair of the Environmental Action Committee, expressed her hope that Vanderbilt would join Fossil Free SEC, a coalition of 12 schools within the Southeastern Conference that promotes divestment from fossil fuels. Ahmed also stated in her speech that by removing the greenhouse and the lack of action on the part of Diversity, Equity and Inclusion Committees, the university has demonstrated that it prioritizes profits over students.

“This is the status quo we need,” Ahmed said. “We need the ability for Vanderbilt to sit here and realize that their students will not be quiet and sit in a meeting room and just watch these issues continue on.”

Dean of Students Mark Bandas attended the protest because he had engaged with the student leaders who had organized the event.

“As a university, we support the right of those who participated today, and all of our students, faculty and staff, to make their voices heard on issues they feel strongly about,” Bandas said in an email to The Hustler. “We are also committed to empowering diverse voices, cultivating critical discourse and working through issues of concern within our community.”

Chancellor Daniel Diermeier did not respond to a request for comment. His office referred The Hustler to the Dean of Students’ Office instead.

“It’s important for students to make their voices heard and that includes being advocates for specific issues and to be protesting,” Diermeier said in a Feb. 20 interview with The Hustler. “It’s always important, particularly in the time of COVID, that they are coordinated with us to make sure that everything is done safely and in a manner that doesn’t disrupt university operations.”