Vanderbilt loses a heartbreaker 4-2 to the No. 23 LSU Tigers. 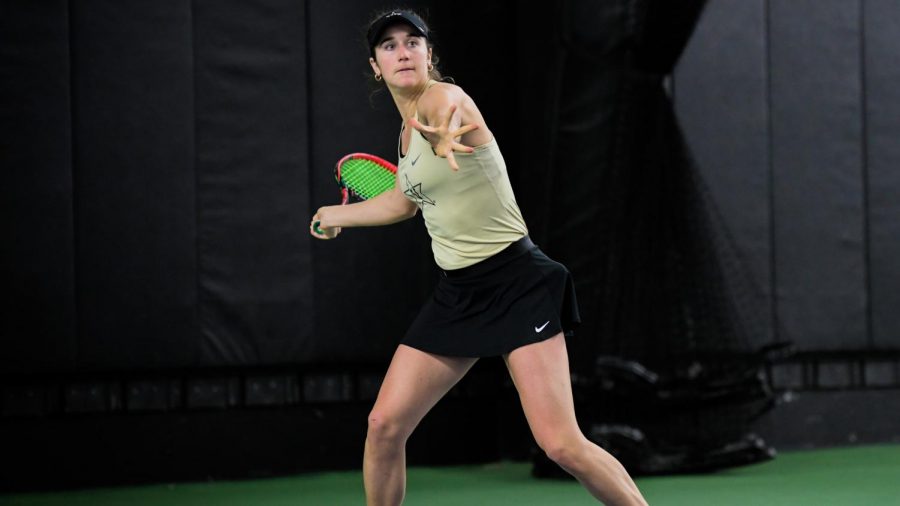 In a close match, Vanderbilt women’s tennis suffered its first loss of the 2021 spring season against the LSU Tigers on Monday. After taking down No. 9 Georgia Tech on Valentine’s Day, the Commodores returned to action in the Currey Tennis Center after having two matches postponed, but they fell just short of victory in a 4-2 loss to the Tigers.

“[LSU] played a hell of a match,” head coach Aleke  Tsoubanos said. “They regrouped really well, and they came out and competed at the start of singles matches.”

To start the match, Vanderbilt decisively took the doubles point behind strong performances from sophomore Anna Ross, fifth-year Christina Rosca and freshmen Anessa Lee and Holly Staff. At line three, Rosca and Lee quickly shot ahead and held their lead, finishing their set 6-2. Lines one and two both took on early leads as well, but they faced a bit more resistance from the Tigers. Ultimately, Anna Ross and freshman Holly Staff’s powerful groundstrokes and net play proved to be too much for LSU’s Eden Richardson and Nina Geissler at line one. Ross and Staff closed out their set 6-3 and clinched the doubles point for the Commodores. Fifth-year Emma Kurtz and sophomore Marcella Cruz were up 4-3 at line two when the doubles point was taken.

Suddenly down 3-1, Vanderbilt would need victories from Rosca, Kurtz, and Cruz to hold on.

At line two, the veteran Rosca had initially fallen 0-2, but she worked her way back into the match steadily and patiently. She eventually overtook the Tigers’ Richardson, who became noticeably frustrated, to win the first set 6-3. In the second set, Richardson regained her composure and kept it closer with Rosca, but Rosca took the second set 7-5 and added another point to Vanderbilt’s total.

Kurtz, at line one, fell to an early 2-0 deficit as well, but like her fellow fifth-year Rosca, she kept the first set competitive with consistent shots and long rallies. She climbed back to 2-2, but LSU’s Safiya Carrington held her service games and broke Kurtz’s serve once to win the first set 7-5. Then, Kurtz jumped ahead in the second set, and kept her lead until 6-5. Just one game away from forcing a third set, it looked as if Kurtz might have a chance to keep Vanderbilt’s hopes alive. But after Carrington evened the game score 6-6, Kurtz lost a heartbreaking tiebreaker that gave LSU the match at 4-2.

Marcella Cruz looked to be on her way to a win at line six, as she was up 6-2, 2-0 against LSU’s Samantha Buyckx when LSU clinched the overall match.

Tsoubanos gave credit to LSU for their strong singles play, but she recognized that there were some opportunities missed by the Commodores.

There were a couple of places where we had chances to kind of pull some early leads and didn’t, and that can always change the momentum at the beginning of a match. We didn’t really sink our teeth into matches and find a way to turn them around.”

After having matches postponed by inclement weather and still dealing with coronavirus restrictions, the team has a tough road ahead as they continue their SEC schedule against Auburn on February 26.

“We’ll come back and try to work on some stuff that challenges us in terms of competitiveness and practice,” Tsoubanos said. “I think one of the things we did today that we didn’t really take advantage of was that we would hurt our opponents, get an up ball, and not be opportunistic, almost afraid to make a mistake instead of playing aggressive. We want them taking opportunities and points when they get them and that just takes a lot of repetition.”