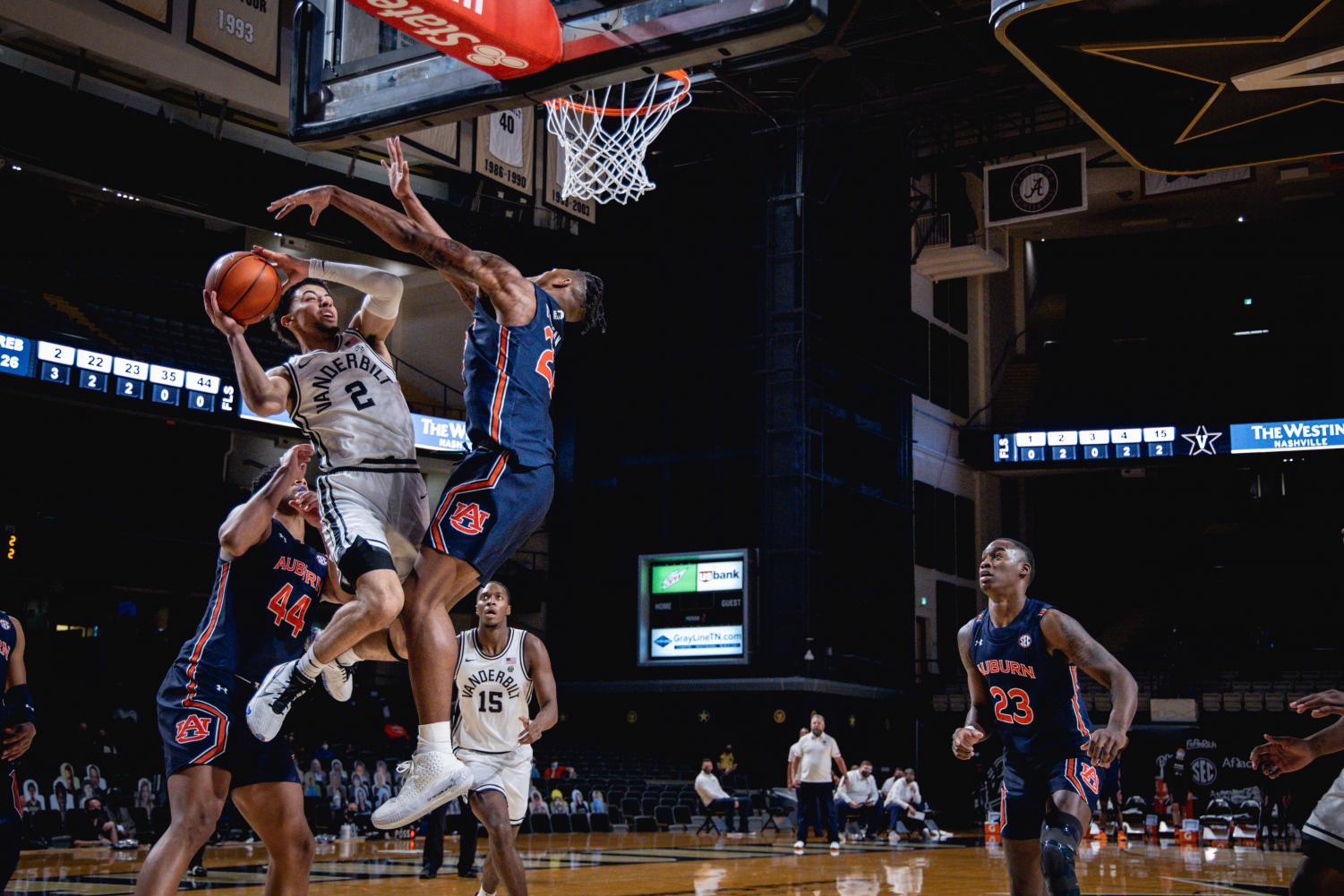 Memorial Minutes: A win—just one

The Commodores picked up their first SEC win of the year, but followed it up with two narrow losses. In each loss, they made crucial mistakes and ultimately beat themselves.

That was fun while it lasted, wasn’t it?

The Vanderbilt Commodores finally notched an SEC win on Jan. 30 against South Carolina, something that has become a rarity for this program, putting their conference win total at, well, one. Their next scheduled opponent: Texas A&M, who had doubled Vanderbilt’s conference win total with two, placing the Aggies firmly in—checks notes—second-to-last place. A pretty even-keeled matchup, I’d say.

But much like Vanderbilt’s first matchup with Texas A&M, scheduled for Jan. 20 and postponed due to COVID-19 complications within Vanderbilt’s program, this, too was postponed. Although this time, Texas A&M was having COVID-19 troubles; the Aggies haven’t played a game since Jan. 30 as a result.

Care to guess how those games went?

If you’ve watched Vanderbilt basketball the past few seasons, you can probably guess the answer to that question. The Commodores have won just ten SEC games since my freshman year, while losing a whopping 53 (it’s actually 56 if you count three-straight first-round exits in the SEC Tournament, losing by 16, 17 and 13, respectively).

So, yes, Vanderbilt lost to Georgia. A close road game that saw Vanderbilt on the losing side by just three points. Then, the Commodores came back home and lost to Auburn, this time by six. But the crazy part about the past two close losses: I’m getting flashbacks to 2018-19, Vanderbilt’s notorious 0-18 season and Bryce Drew’s last as head coach.

The striking similarity is not in the losing, nor is it in the team’s fight. The 2020-21 team has not, should not and will not lose as handedly as that 2018-19 team did. Plus, this team plays to win, night in and night out, unlike that 2018-19 team. These two losses were oh-so-familiar because Vanderbilt didn’t lose to its opponent.

The good: help is on the way

Before we dive into what went wrong in the last two losses, let’s take a minute to look at what went right; a trend that started in Vanderbilt’s first conference win in over 300 days over South Carolina, and it continued through its next two losses.

All season, sophomores Dylan Disu and Scotty Pippen Jr. have been shouldering an unhealthy offensive load. That’s not to say they can’t handle it—if the duo has proven anything from close loss after close loss, it’s that they could very well have the firepower to ignite a win if they’re both on.

But see, that’s the key phrase: if they’re both on. Vanderbilt has sporadically had a third scorer, with an extra man occasionally taking some of the bulk—say, ten to 16 points—off Pippen Jr. and Disu’s backs. However, if one or the other had a poor shooting night, it didn’t seem likely that Vanderbilt could pull it off.

In these past three games, Disu and Pippen Jr. have gotten just the right amount of help. In Vanderbilt’s win against South Carolina, it was Max Evans who played the role of superhero. Disu had 17 points and Pippen Jr. had 23, but if not for Evans’ 29 points, Vanderbilt wouldn’t have pulled away with a 12-point victory over the Gamecocks.

Evans had been struggling this season, but he came back in a big way against South Carolina. He knew exactly what his big night meant for Disu and Pippen Jr.

In the loss to Georgia, Pippen Jr. wasn’t playing his best ball, making good on just three of 12 field goal attempts and finishing with 12 points. It didn’t matter that he was having an off-night, though, because Vanderbilt had four double digit scorers. Disu had a routine 15-point outing, but Max Evans and Jordan Wright finished with 10 and 12, respectively. Against Auburn, the scoring wasn’t as up-to-par as the previous two games, but Wright’s 14 points was the second-most of all Commodores, and it certainly played a role in keeping Vanderbilt within striking distance.

Vanderbilt may be just 1-2 in the past three games, but it seems they’re finally discovering a bit of an offensive identity. On any given night, when role players like Wright and Evans can notch double digit points, command some defensive attention and free up space for Pippen Jr. and Disu, Vanderbilt should have no problem giving its opponent a run for its money.

Vanderbilt is not a bad free throw shooting team. In that victory over South Carolina? The Commodores shot 81.5% from the line, more than enough to win a ballgame, especially when you go to the line 27 times like they did against the Gamecocks. They are by no means a perfect free throw shooting team, but after that contest against South Carolina—prior to the losses to Georgia and Auburn—they were shooting 77% from the free throw line in SEC play.

That’s good enough, at least in college ball, to win some games.

Then, they shot 65% against the Bulldogs, leaving eight points at the line in what ended up as a three-point loss. And last night, they left eleven at the line, shooting 50% on 22 attempts.

A combined 57% at the line in the last two games won’t cut it. Especially when you find yourself losing by such miniscule margins.

I asked Jordan Wright about the free throw struggles after their latest loss to Auburn, and his answer was simple.

“I think it’s all mental, honestly,” he said. “We shoot free throws in practice every day. Everybody gets up at least 25 makes after practice. Everybody shoots a high percentage; we have to shoot at least 80 [percent] to leave the gym.”

As for whether this will linger?

“No,” Wright said with confidence. “We have some good shooters on this team…We’re just in a slump, I guess.”

Then, I asked Coach Stackhouse. Is this something that needs correcting, or will it naturally fix itself? Both answers would’ve been acceptable; I was just curious to see how he responds to back-to-back, uncharacteristically poor free throw performances.

“I mean, I don’t know,” Stackhouse responded. “We just missed them. We shoot them in practice; we practice them everyday. When you get in the game, you hope that you can make them. We didn’t make them today. It wound up being the difference in the game. We don’t need to put more emphasis on it than we normally do.”

Maybe I asked a bad question or maybe it was poorly phrased. I suppose only time will tell—as Wright said himself, they’re now in a slump. A slump, hopefully, will revert to the norm soon enough.

But if the slump turns to a drought, things could get ugly.

This one is less of a recurring issue and more of a one-time mishap. A significant mishap, nonetheless. When Vanderbilt took to Athens to face the Georgia Bulldogs, they found themselves in a legitimate position to win the game with just under two minutes to go. They lost, of course, but the play calling was what may have caught your attention.

Or it may not have caught your attention. Because it was unclear exactly what the play call was and why that was the decision.

Trailing by two points with 50 seconds left, Coach Stackhouse called timeout to talk things over—presumably, to draw up a gameplan. And what followed was an inbounds pass to Pippen Jr., who picked up an obscene amount of defense attention, as he normally does, and proceeded to lose his footing, falling to the ground and nearly losing possession of the ball.

Luckily, for Vanderbilt, it was ruled a jump ball, and the possession arrow was pointing its way. So they retained possession, and on the inbounds pass, the Commodores again seemed to lack any formidable play call. The ball went to Pippen Jr. at the top of the key, with a defender on his back. Yet Pippen Jr., with his back facing the basket, turned around, took two dribbles toward the iron and stopped for a between-the-legs dribble—freezing his defender—then went right at the poor Bulldog defender, executing a perfect spin move and scooping in an open layup.

Pippen’s shifty move bailed out Stackhouse, who drew up whatever you’d call that play, and tied the game up at 70. On the proceeding Georgia possession, Vanderbilt was whistled for a foul, and the Bulldogs converted on one of two free throws.

Georgia led by one, with 15 seconds remaining, and Vanderbilt, with a timeout to spare, had possession of the ball.

Coach Stackhouse opted not to use either of his two remaining timeouts. So Pippen Jr. took the inbounds pass on the opposing side of the court, dribbled all the way up the court and finally had reached halfcourt with about nine seconds left.

With Max Evans nestled in one corner and Trey Thomas in the other, you may wonder where Vanderbilt’s other two players were. Let’s call it a miscommunication, but both Disu and Wright decided to set screens on opposite sides of Pippen Jr.’s defender—at halfcourt.

Once Pippen got around them, he had two teammates buried in the corners, defenders draped on top of them and two teammates about eight feet behind him. He had no direction, hardly any play call, and Vanderbilt still didn’t take a timeout to draw up a play. Credit to Pippen Jr. for getting to the basket, because he certainly did just that—but his layup was swatted off the backboard. Game over.

“It just came down to one possession there at the end,” Stackhouse said, later noting that “we kind of got what we wanted—Scotty going to the basket. I knew they were switching with their five, so I thought maybe he’d get the opportunity to get something at the basket, but they all converged and made a good play.”

The play call, down by one, with 15 seconds left in the game and a couple of timeouts in your backpocket, is a full-court Pippen Jr. iso? And that’s what you wanted?

Like I said—I’m a bit confused about that call. Moreover, I’m confused whether there was any call at all.

If Vanderbilt wants to emerge from one of these close games victorious, surely, it will need to come up with something better than that.

I’ve been watching VU basketball for 50 years and can say this. The defense and rebounding are not bad. But the offense is terrible. 4 guys pass it around on the perimeter, hoping for an open 3. or a drive to the basket that usually results in a blocked shot, a terrible shot, or a missed open layup. Just too many unforced turnovers as well. And Roy Skinner must be turning over in his grave about the poor free throw shooting. It is simply atrocious in most of the games. OK its clear our talent level does not match the rest of the SEC but the “no-points offense” needs to be changed. I agree with the commenter below and that Stallings offense could at least generate decent shots most of the time. Given the current situation, I would start McBride and Pippen in the backcourt, Brown, Disu, and Evans. And play them as many minutes as possible. The other players can spell the starters, who need to do or die to win a game or 2 late this season. And we need to recruit to replace our 5 seniors..

The problem with Stack’s “play calling” (or lack thereof) is it is entirely built around modern NBA approach. Which is fine if you have 1 key ingredient – Dominant big ball handlers who can also shoot and just kick butt in general – not always an ingredient easy to find, especially at Vandy. The beauty of the stallings era (yes beauty) was a mastery of recruiting the player types that fit an actual system and understanding Vandy requires a different approach to succeed in basketball. BUT I do share in your slight optimism with this team, more players seem to finally be gaining some confidence (in mid-February but I’ll take what I can get)….I’ll just go ahead and have the corn ready next season…..