Wente discussed Vanderbilt’s draw, the role of student activism and journalism on campus and what she hopes to accomplish as Wake Forest’s first female president. 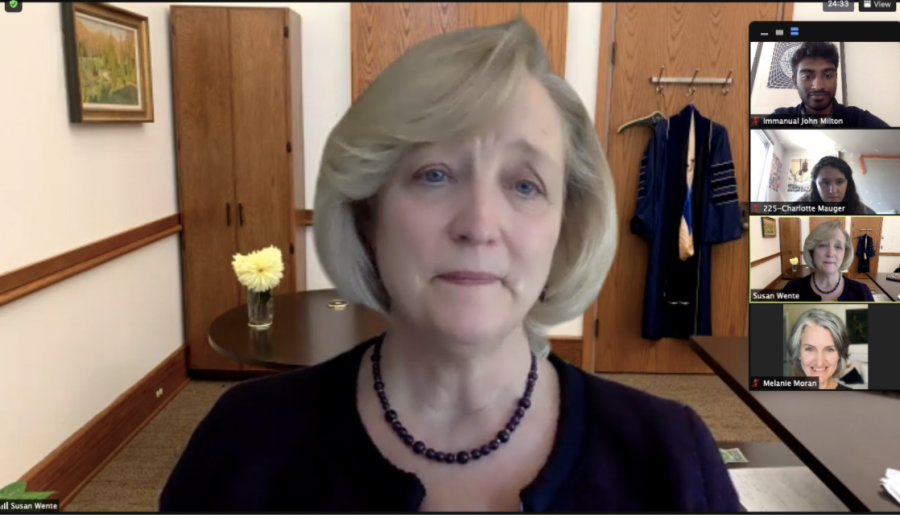 Provost Susan R. Wente sat down with The Hustler Feb. 3 to discuss how she feels the university has changed over the two decades she has spent here, the transition to Chancellor Diermeier and the legacy she hopes to impart on the Vanderbilt community. She further discussed her goals for her new role as President of Wake Forest University.

What first drew you to Vanderbilt?

What first drew me to Vanderbilt way back in 2002 was to come here to be the chair of cell and developmental biology. So, it was a leadership opportunity. I was on the faculty at Washington University in St. Louis, in their school of medicine. And I got excited about coming to build a department to recruit faculty, to mentor faculty, to build their graduate program.

It reflects what now has been a career of academic focus in terms of mentoring and building programs, departments, schools and colleges.

How has the university changed in the time you’ve been here?

The university has gotten larger, not necessarily in terms of undergraduate student enrollment, but in terms of grant funding, in terms of faculty, in terms of the number of different degree programs, the span of our influence, has dramatically changed over those two decades.

Also, it’s true that the interconnectedness amongst the ten schools and colleges and the interdisciplinary focus and breaking down silos, between the schools and colleges, has also continued to make huge steps forward over those times. You can take classes in any of those four different schools, you can now with Immersion Vanderbilt engage in projects with faculty across all ten schools and colleges. So that’s also been something that we continue to see progress in.

What motivated you to join Wake Forest?

I love Vanderbilt, and I really enjoyed my time here. I think that during the year when I was Interim Chancellor and Provost, I really got a view of what it would be like to lead a university and to think about all parts of the university, especially in terms of its link to the broader community, and the impact of higher education and really being a leading voice for the role of education and research in society in a different way than the Provost does.

When Wake Forest approached me about applying for the position, and I looked at them, and what their distinctions were, I could see a way that I could have an impact.

How was contact with Wake Forest initiated? When did you know you were leaving Vandy?

I only knew that I was being offered the position. It goes very fast at the end—a week before it was announced.

Wake Forest announced in mid-October that their president, Nathan Hatch, was going to retire. That’s when they launched an international search. They retained the services of WittKieffer, an international search firm and consultant. During that period from the end of October onward, they were developing a portfolio of candidates. I decided to join that process at the end of November, beginning of December. They conducted a very thorough, very thoughtful and very welcoming interview process. They had an incredibly diverse and inclusive search committee that conducted the process.

What does it mean for you to become Wake Forest’s first female president?

I truly believe in representation. This will be something just like my role as being the first woman provost at Vanderbilt. It enables leadership opportunities for not only women, but other underrepresented groups in universities, but also I think, in other areas of our broader society. I want to utilize this opportunity to have an impact in any way possible.

What do you hope to implement that you’ve learned from your time here at Vanderbilt at Wake Forest? How do you think your time as interim chancellor here has prepared you for your new role?

Have you spoken to Chancellor Diermeier about your transition to a new university? If so, what advice has he given you?

Oh, yes, Chancellor Diermeier and I speak often. He has been very supportive of me making this step in my career and is very excited for me. I think probably one of the things that I got to experience very closely was his transition and onboarding here because I was lead on that, as well as the Chancellor’s Office as well as the provost office.

Recently, Vanderbilt student activist group Dores Divest has made Hustler headlines . How will you handle student activism at Wake Forest? Do you support the divestment efforts from students?

I will address my overall philosophy on student advocacy. I think that universities are absolutely a melting pot of ideas. They bring people together with diverse perspectives and approaches. I embrace students advocating for what they think are critical issues in university life, but then also in the broader society. This is a time in a student’s life when they can learn how to be advocates for the long term. We provide an environment that allows them to think about how they’re going to be forces for positive change in society.

I’m not really going to address any individual topic. That’s really for the broader leadership of Vanderbilt right now. I do not know the status of the sustainability projects and the other types of projects at Wake Forest to comment.

What do you think the role of student journalists is on campus? And then how will you work with The Old Gold & Black?

The Old Gold & Black have already reached out to me and I provided them with some answers to some questions. I want to be sure that during this phase of my transition, I’m still focusing on Vanderbilt and learning about Wake Forest. But then on July 1, I’ll be working with them, just like with you guys, in terms of thinking about how to really create connections and create opportunities to listen and learn. That’s from both sides.

I view student journalism as this tremendous opportunity for students to learn how to be evidence-based, fact-based, to rigorously understand diverse perspectives on different topics and take that forward. I don’t know what your future careers are going to be with your different majors: how you will use journalism and computer science, for example.

But I think that these are skills—communication is so important, in all ways. I look at every student organization and, in particular, The Hustler as a key part of our university community.

What do you think your legacy at Vanderbilt will be?

I could give you a really long list of things that we’ve accomplished, I would say that I would want to be remembered as someone who really cared deeply about Vanderbilt—and that’s true not only as an institution but as a community. That I worked hard to put people first, and that I made a difference to the best of my abilities to support our students, faculty and staff and advance the university’s impact.

I hope that people remember that while I was here, I lived a life that mattered to the entire Vanderbilt community.

If you could change something about your time at Vandy, what do you think you would change?

Accessibility and achievability are two key things that in thinking of the power of higher education are incredibly important.

If I could wave my magic wand, and I do this for every university in the country, we would have fully-funded Opportunity Vanderbilt, fully-funded Experience Vanderbilt and really ensure accessibility and achievability for our students.

What will you miss most about the Vanderbilt community?

We’re gonna do a quick seven-question lightning round. So these are questions I just want you to answer off the top of your head. Whatever answer comes to you first.

Favorite place to eat on campus?

The politics class this last semester. That was really cool.

Be honest. Are you gonna miss the squirrels?

Who came up with the idea to put masks on statues?

Oh, I’m gonna make a lot of restauranteurs very sad. But I will say the longest-standing one is Margos in East Nashville.

It has to be The Hustler!

This article has been edited for brevity and clarity.