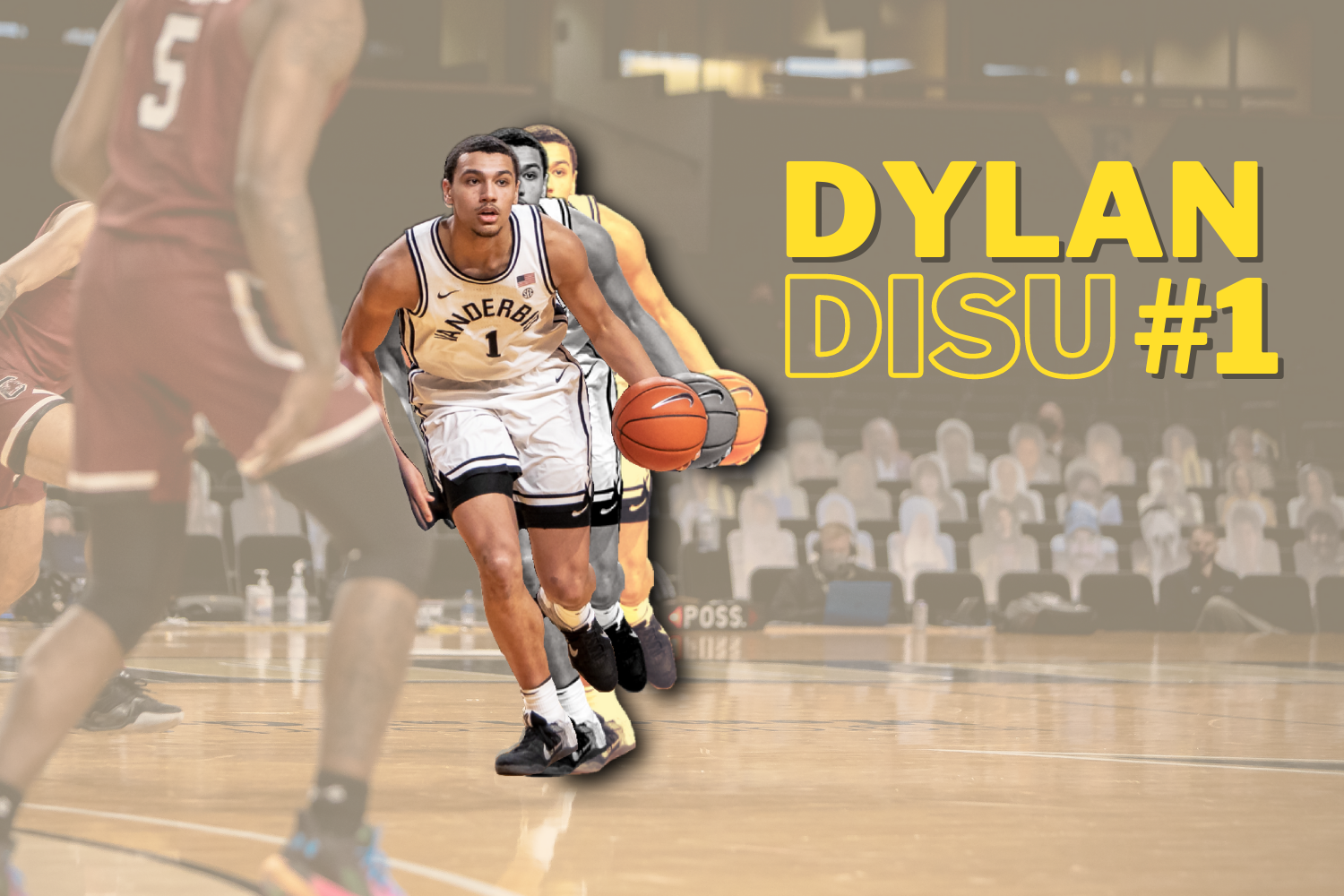 Outgrowing ‘Bambi’: Dylan Disu is taking his game to the next level

Despite initial uncertainty around his future at Vanderbilt, Dylan Disu trusted Jerry Stackhouse to help him reach the next level and is thriving in his second year on West End.

Turnover in the Vanderbilt athletic department has simply become the norm. With three athletic directors, two head football coaches and two head basketball coaches in the span of just three years, continuity has been difficult to find on West End.

In March 2019, after committing to Vanderbilt, sophomore forward Dylan Disu made the trek to Nashville, his soon-to-be home, for meniscus surgery.

“I had surgery on a Monday, and I think I left [Nashville] on a Wednesday. Everything was all good. We had talked a lot with the coaching staff, and we were looking forward to coming back in June for summer school,” Disu recalls. “Then, two days later, Coach Drew gets fired.”

A week that began with successful meniscus surgery ended with an uncertain future, as the head coach he had originally committed to would not be a part of the Vanderbilt basketball program moving forward.

“It was really tough, and my mom was really worried,” Disu said. “It was obviously tough to see Coach Drew go, but I knew that there would be other schools that would most likely still be interested.”

Disu was certainly right about that. The four-star prospect held a handful of Power Five offers from schools such as Illinois, Georgia Tech and Stanford. But he elected to remain patient, and let Vanderbilt make the next move.

“I was just sitting waiting to see who they hired to see if I would continue to come or if they would still honor my scholarship because I really still liked Vanderbilt,” Disu explains.

Vanderbilt tapped Jerry Stackhouse, a former NBA All-Star and NBA G-League coach, as its next head coach. And Disu was intrigued.

After a few phone calls with Stackhouse, he had the opportunity to take another official visit to Nashville to meet him and the new coaching staff.

“I came on an official [visit] with Coach Stack just to get to know the coaching staff and all that. We went to Topgolf,” Disu says. “His competitive nature really came out at Topgolf. You could just tell he wants to win. I think that was my first impression of how competitive Coach Stack really is.”

Disu resonated with that competitiveness. As the son of two former college basketball players and the brother to several talented young athletes, Disu was eager to find a place that would embrace the competitiveness he grew up with.

“Basketball was kind of something we all share,” Disu says. “My two half-sisters both play basketball. They are like 6’1” already, and they are sophomores. My little brother is like 6’4,” and he is in eighth grade. I think [one day] he might be taller than me.”

Nonetheless, Disu stands at a respectable 6-foot-9 and despite first loving football, a high school growth spurt set him on a path of success in basketball at Hendrickson High School in Pflugerville, Texas.

His legendary career at Hendrickson was capped off with consecutive District 13-6A championships and most valuable player awards in 2018 and 2019. And his massive 23-point, 10-rebound averages as a senior cemented his standing as one of the top players in Texas.

But one performance, in particular, thrust him into the national spotlight. In a December game against Leander High School, Disu erupted for 51 points in an 82-73 overtime victory for Hendrickson.

“It was a fun game. We actually almost lost that game. We were down in the fourth quarter and had to come back,” Disu says. “I didn’t really even know that I had 51 [points]; I was just playing at that point. I was just shooting the ball anytime it came to me.”

With his 51 points, Disu set the Hendrickson record for points in a single game. He also made ten of his school-record 240 career three-pointers in that monster game, another single-game record.

“I asked my mom after the game–she would always keep my stats–‘how many points did I have?’ and she said ‘51’ and I was like ‘woah’,” Disu says. “So I went into the locker room and my coach asked me ‘how many points did you score?’ and I said ‘51’. He said, ‘51 fucking points?’ Nobody knew I had that many points, especially me. I thought it was just another regular game.”

Needless to say, when he arrived at Vanderbilt, Disu felt comfortable shooting from beyond the arc. However, throughout his freshman season, he struggled from three-point range, converting just 29 percent of his attempts from distance. Rather than let this discourage him, he entered the offseason eager to make himself more difficult to guard.

“I went into the offseason really wanting to work on getting into the paint and scoring in there as well,” Disu explains. “I didn’t want to be one-dimensional; it’s easy to guard somebody who only shoots threes.”

The results of that offseason work were apparent in the preseason. Disu has added nearly 25 pounds to his body since his senior year of high school, which has allowed him to shed his freshman year nickname: Bambi.

“I feel like maybe our most talented player offensively and defensively is Dylan Disu,” Stackhouse told the media in a preseason press conference. “Last year, I think his nickname was Bambi, because he was just out there. But he plays hard, and now his body is really coming into form. And he has big-time confidence.” 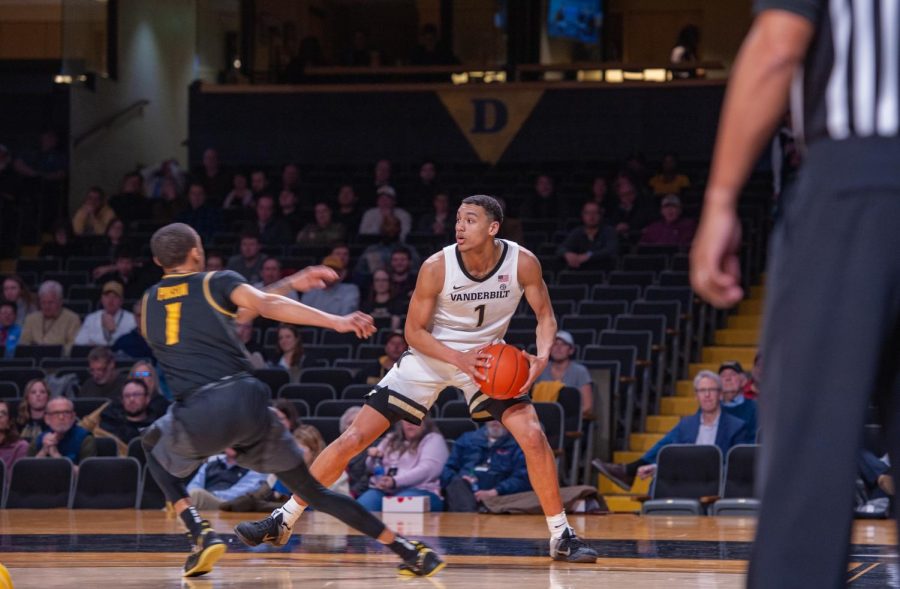 Gallery|2 Photos
Disu spots up in the corner in a game against Missouri during his freshman season. (Hustler Multimedia/Truman McDaniel).

With his motor and revamped body, Disu has been the anchor of Vanderbilt’s defense this season. He is averaging a block and a steal per game and is now second in the entire Southeastern Conference (SEC) in rebounds per game with 8.3.

Offensively, Disu has done exactly what he set out to do in the offseason: round out his game. He has doubled his scoring average from seven to 14 points per contest, largely thanks to his ability to play off the dribble and in the paint.

In just 12 games, he has made more free throws and two-point field goals than he did all of last season, while not abandoning his bread and butter: the three-pointer. He is now shooting 38 percent from beyond the arc on four attempts per game and is on track to make more threes than he did last season.

“Being able to get into the paint, attack my defender off the dribble and possibly open up the court more for my teammates really helps us as a team,” Disu says.

In addition to his work in the box score, Disu has been charged with a leadership role this season. With four freshmen seeing significant minutes, he has used his own freshman year shooting woes as perspective for his younger teammates.

“They have games where they don’t shoot the ball well, and I had a lot of those last year. More often than not, I wasn’t shooting the ball well,” Disu says. “Don’t worry about what you’re shooting in the game or your percentages or if you airball. I airballed last year against Tennessee when we lost the streak. I feel like this team from last year has been at the lowest point. We were getting booed on the court.”

This year has presented its own set of challenges for the Commodores. Through COVID-19 shutdowns, tough losses and shooting slumps, Disu has looked to foster a culture of togetherness while reminding his freshmen teammates to remain patient.

“It’s just about letting those guys know that we have been where you are before and you are going to be ok,” Disu said. “And at the end of the day, we have your back.”

Disu entered the season with high expectations on his shoulders both from himself and his head coach. But he continues to emerge as one of the SEC’s best two-way players, leading one to believe a shot at the NBA may not be too far in the future for the Texas native.

“I don’t think anybody on our team has more upside than Dylan. The potential to have not only a great college career but being able to possibly play at the next level as well,” Stackhouse said before the season began. “He has a skillset of being able to shoot the ball unbelievable. High IQ for the game. He’s getting the confidence; he’s looking like a man.”