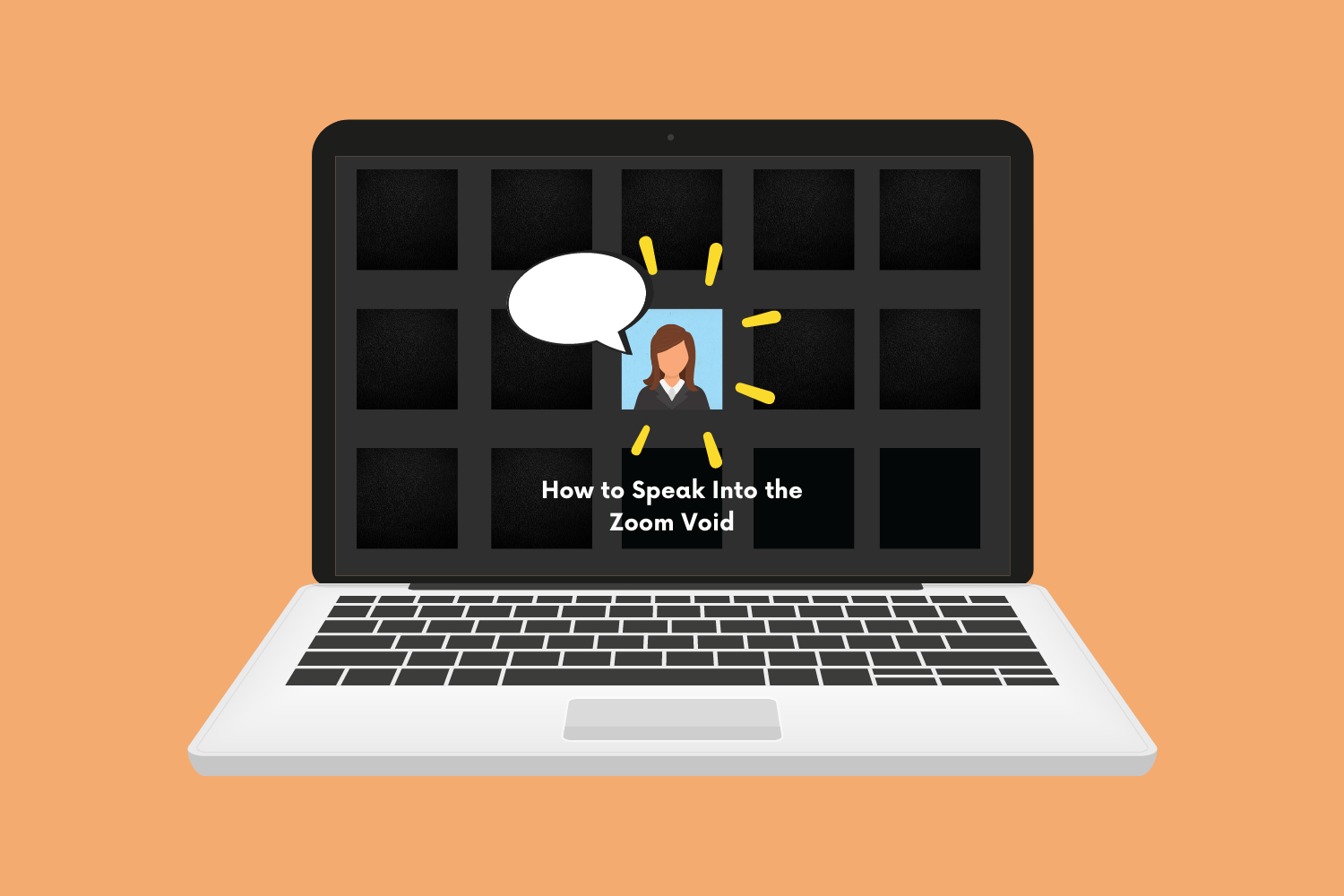 Speaking first might be the answer to overcome Zoom awkwardness. (Hustler Staff/Emery Little)

Speaking first might be the answer to overcome Zoom awkwardness. (Hustler Staff/Emery Little)

An Intro(vert) to College: How to Speak into the Zoom Void

Whether there are faces or black squares staring back on the screen, talking in a Zoom setting may seem daunting, but taking the first step is always the hardest.

As I was picking out my classes for the spring semester, I noticed that I had even fewer in-person class choices. Evidently, I will have to face another semester of online awkwardness: professors asking questions with no response, random jokes followed by muted laughter and breakout rooms with unclear instructions—these are the cringe-inducing Zoom moments I know we all dread about online school.

In a way, Zoom might seem like an easier medium for many introverts to speak and participate. Often, Zoom meetings are goal-oriented, so I know what I’m supposed to be talking about and how I should prepare before I go into the meeting. Many Zoom meetings don’t require my camera to be on, so I don’t have to worry about fixing my hair or checking to see if I have anything on my face. Participation might occur through means other than actually speaking, such as using the chat function. Despite the anonymity and various methods of participation that exist in Zoom, the platform still poses many challenges for us introverts.

The real world does not lag or glitch. Sometimes I have to speak louder in real life, but that’s not nearly as embarrassing as scrambling to figure out what’s wrong with my microphone over Zoom as my whole class waits patiently before inevitably turning to someone else for an answer—PSA: make sure your Zoom is updated. It would’ve saved me many awkward moments.

Zoom does lag and glitch because of the Zoom software, shoddy internet connection or laptop issues. Whatever it may be, Zoom is like a fight scene in a movie with too many cuts. I can’t always follow along, and I rarely know how to spot the right moment to step in and speak up.

When I’m having a conversation in person, there are several cues I look at to determine what my next comment or action should be. These cues include analyzing the other person’s body language, facial expressions and the previous words they used, for example. These are cues that I wasn’t consciously aware of prior to this past semester online but after Zoom, I’ve noticed just how essential in-person cues are to having a fluid, normal conversation. Over Zoom, I feel as though I’m talking to a bunch of floating heads without facial expressions because of exhaustion, boredom or a general separation from and disinterest in the class. Sometimes the audio cuts out, the microphone volume is too low or the whole video is lagging, so I can’t hear what was just said. In other words, the three important cues I look to for a normal in-person conversation do not exist over Zoom.

So then, how do I know when to speak? What to say? How to say it?

In classes where the professor manages participation in discussions by raising hands, I take advantage of that feature. However, raising my hand, even over Zoom, has its own issues as well. My heart still races as I wait to see if I will be called on. Even so, it’s better than worrying if I’m going to cut someone off or if I won’t be fast enough or loud enough to say what I want to say, which is what goes through my mind when I have to raise my hand in person.

In classes where the discussion is a free-for-all, there’s bound to be awkward overlaps and interruptions, so I take a different approach. I try to speak first. I either come into class with a discussion point already formulated or while the professor explains the directions on the discussion, I think about what to say first. I practice and elaborate on my answer in my head and then as the professor opens up the discussion to allow the class to speak, I go.

Again, this is a little scary. I want to say the first answer or discussion point so that it won’t matter if it’s wrong, or completely different than what everyone else is thinking. Being first also means that I can say I spoke at least once during the class. Most importantly, though, being first has this magical property where I have already overcome the hurdle of saying something in a Zoom meeting. From that moment on, I don’t feel the pressure to speak, but instead, I’ll want to speak. Maybe somebody says something interesting that I agree or respectfully disagree with. Maybe somebody asks a question to the class and it’s something I had thought about, too. Maybe I have a question that’s burning in my mind, and I’m interested in the opinions of my professor and classmates. No matter what the situation is, I have the option to speak if I want to, not because I have to force myself to answer for participation points.

Even if I don’t speak first, once I do speak for the first time in class that day, the same effect occurs. I’ve already talked once so there’s no pressure; it’s up to me. There’s something else I’ve noticed in these free-for-all discussions—I’m not going to be the only one to make a mistake and talk over someone, or have microphone issues or internet issues. Many other people in my class, if not during the same class, will at least have one issue somewhere throughout the semester because these are not issues exclusive to me. I constantly have to remind myself that we’re all struggling to navigate a new medium for classes, and I don’t need to feel embarrassed when a Zoom error occurs.

Nevertheless, this strategy may not work and speaking over Zoom can still seem like an insurmountable mountain—and sometimes I do feel that way. As such, talking to professors about other methods of participation is extremely important. Just this semester, many of my professors made notes in their syllabi or on the first day of class to show their sympathy. If a student had trouble participating in class for any reason, they could talk to the professor and together they’d figure out a better way to record their participation. One of my professors thoughtfully offered a plethora of different forms of participation that were bound to accommodate almost every students’ needs. These forms included the Zoom chat function, discussion boards on Brightspace, TA-led discussion sections and more, and I am extremely grateful for these alternative options because I was able to actually enjoy engaging with the course material the way I wanted to.

Now that Zoom is a staple in all of our lives, it’s important, introvert or not, to learn to conquer it and become more than floating, expressionless heads.

Great thoughts. And some insight for women and zoom. Their audio engineering design is male-centric meaning higher and typically more feminine voices get filtered out and have a much great challenge cutting through and getting a word in. It’s an issue that I am hopeful they will fix soon but one thing that makes a huge difference is a good mic. USB Mics like Blue Yeti or comparable are great but if you aren’t averse to them, headsets with boom mics also make a great difference and filter out background noise usually. Air Pod Pros or something similar can be great but run out of battery fairly fast if you’re using them all day (you can alternate one in ear while other is charging). So for introverts who may also be soft spoken, good mics help you to be heard.