Q&A: Ethiopian-American novelist Dinaw Mengestu speaks to The Hustler about his experiences as a writer and immigrant

Dinaw Mengestu, author of three novels, freelance journalist and professor of creative writing, was named a MacArthur Fellow in 2012. 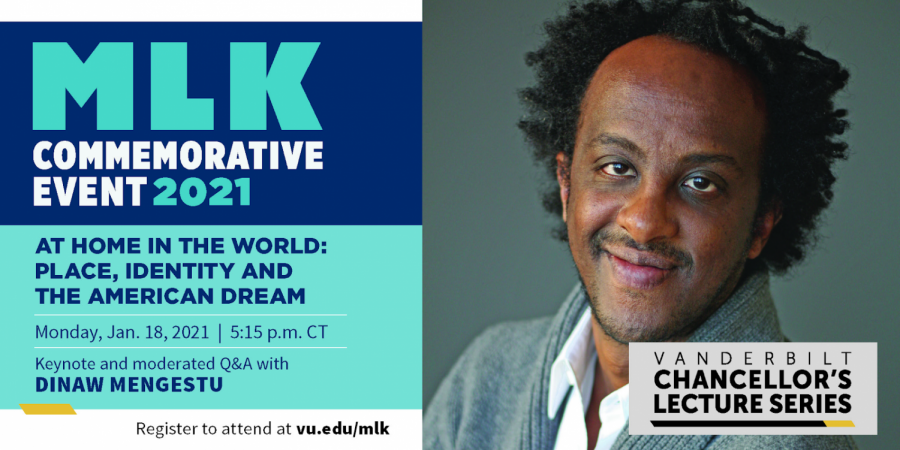 Dinaw Mengestu is the keynote speaker for the Jan. 18, 2021 MLK commemorative event over Zoom. (Vanderbilt University)

On Jan. 18, Dinaw Mengestu, an Ethiopian-American novelist, freelance journalist and professor of creative writing will give a keynote address for Vanderbilt’s MLK commemorative event over Zoom.

Mengestu has been listed in “The New Yorker’s “20 Under 40,” received The National Book foundation’s 5 Under 35 award and was named a MacArthur fellow in 2012, among other honors. Mengestu immigrated to the U.S. from Ethiopia at the age of two.

The 2021 Martin Luther King Jr. Day Commemorative Virtual Event will take place at 5:15 p.m. CST. The event will begin with a 15-minute candlelight vigil followed by a keynote and Q&A. The Hustler spoke with Mengestu on a Jan. 14 Zoom call about his novels, insights into recent events at the Capitol and the American Dream.

Vanderbilt Hustler: Your novels tell very unique immigrant narratives, how do you intend for your novels to speak to your readers?

Dinaw Mengestu: I do not know who my readers are, and I never want to underestimate them. Your readers are always a slightly-amorphous body of people. The audience that I am most concerned with, strangely enough, are my fictional characters. I feel the most obligation to my characters. That obligation can be thought of as a respect for them and their desire for the complexity and depth of experience that I think people deserve.

That movement away from the things they had to leave behind to the construction of a new identity, a new home, trying to make sure that experience isn’t defamiliarized and contains as many layers of meaning as I have seen in my own families and witnessed in my own life—that is the kind of experience I hope will be born out of the page.

The reader on the other end of it is hopefully present and engaged by it. Hopefully, they feel that they are reading an experience that actually is complicated. I think they can connect to the complexity because the person they are reading about is actually fully alive. It is not because it is familiar to their own experiences, but because it actually has the emotional complexity of a real, living person.

How do you think underrepresented voices in fiction can be more widely represented?

I think there are a lot of systemic problems, and I think one is making sure underrepresented voices actually feel and believe that there is a world that will represent them accurately. I think so many potential artists and voices actually count themselves out of that conversation long before anything else even happens.

Once we get a number of South Asian writers or African American or Black writers, then we have diverse writers. Why do we need another one? We have Toni Morrison—how many more of those voices do we need? There is a sense that we only need to occupy so much space. We only need to give so much room to those voices because those voices are important, but they are not really valued. They are important in the way in which they can be pointed to and signified, so we need to move further still in a cultural embrace of what it means to have a real diversity of voices.

It is not about making sure we have that experience checked off, which is oftentimes where we still are. We want to make sure that we have certain narrative trends blocked off, and once we have them blocked off, it is really easy to feel that that work is done. I think that the creators of those stories, especially the younger generations, are aware of that.

I remember the first time I tried writing my first novel, being told no one is going to care about a bunch of African immigrants in Washington D.C. I think that sense is still pervasive. I think people still feel like there is not much attention or care about who they are. So, I think we need to make sure that we are actively encouraging and inviting people to start making stories and know that there is a world of people who care about them and those narratives.

What does the American Dream mean to you?

America is very distinct in that it is the only country that has this espoused Dream. I remember writing my first novel, and people thought I was being critical of the American Dream. The characters in it do not acquire the usual trapping of American success. There is this idea that if your characters are not going around declaring how wonderful it is to be an American, they are opposed to this American Dream or this American value system. That is kind of ridiculous.

I think that this American Dream is being honest about what America is while still believing you can be a part of it. That is the radical nature of that Dream. We were talking about Dr. Martin Luther King’s Dream speech on the Capitol. The fact that MLK still continued to believe in the possibility of this fight, having experienced this full-scale American violence and oppression—to still believe in something positive and better on the other side is something remarkable and a radical notion.

It is not one that is connected or tied to a material wealth. It is tied to the possibility of worth and collectively to somewhere other than where we are right now. That is a remarkable thing to believe in.

I think it is why immigrants continue to come to America. They do not believe that America is going to be a wonderful, perfect land. This idea that immigrants arrive in America delusional about the nature of America is ridiculous. They arrive fully aware of how problematic America is and yet still persist in coming and bringing their children, raising their children here and pushing America a bit forward, toward something fuller and more complicated than what it already is. That is the Dream for me. The ability to believe in it when it is giving you so many reasons not to.

What insights do you have about the turbulent events of this past week?

As people have noted, this isn’t a surprise. What we have witnessed is actually just a punctuation of four years. It is like the groundwork has been laid for years for us to get to this point. My curiosity has been: how has this been possible, and how have they created this narrative of this movement and these supporters as being somehow decent and law-abiding people? How have they managed to get away with that rhetoric when clearly what we witnessed is the exact opposite?

It is violent and unfair. But the ability to continue to present themselves as this party of law and order, of people who believe in the Constitution and are supporting democracy—that is the thing that I am most fascinated by because it is the construction of a narrative, and it is a narrative that has a lot of political power and weight. It is a narrative that to some degree exists far more on the right in its ability to assert that whatever they do is good.

It is almost a costume performance. There is this sort of crowd of this movement that has paraded itself under this banner of American virtues. That banner has been the very thing that has allowed them to escape criticism into the very thing that allows them to continue to argue for their inherent goodness and for the goodness of their values and the fact that they are supportive of police or law and order.

What we have seen now is that banner has suddenly fallen away. We have witnessed the costume party come to an end, and what we are actually seeing is a little bit more into what that movement really is: something that is violent, selfish and has nothing to do with law or the Constitution. It has everything to do with wanting to hold onto a very specific set of ideas that preserves their belief of the world and its violence.

That unmasking, the unveiling and how that continues to play out and how far the movement reverts to defending itself again is something that I am fascinated by. How do they make the move back to presenting themselves as the good, and do we accept that?

The other side of that is the left, and its opposition to American violence has always been castigated as being critical of America and therefore anti-American, radical and communist—all things that are intended to project this veneer somehow outside of the U.S. or outside of American values. So how those competing narratives play out over the next few years is going to be fascinating.

Do you have any advice to students who are interested in writing a novel themselves?

We are not trying to fix anything or answer any problem, but we are trying to bring it out and figure out how we can create lives that are as complicated as the ones that we live in. When I work with my students, it is always that idea of thinking about: what don’t you understand? How can writing bring you closer to it? Not to resolve it or fix but just to get you closer to it and stand in conversation with it.

This article has been edited for brevity and clarity.