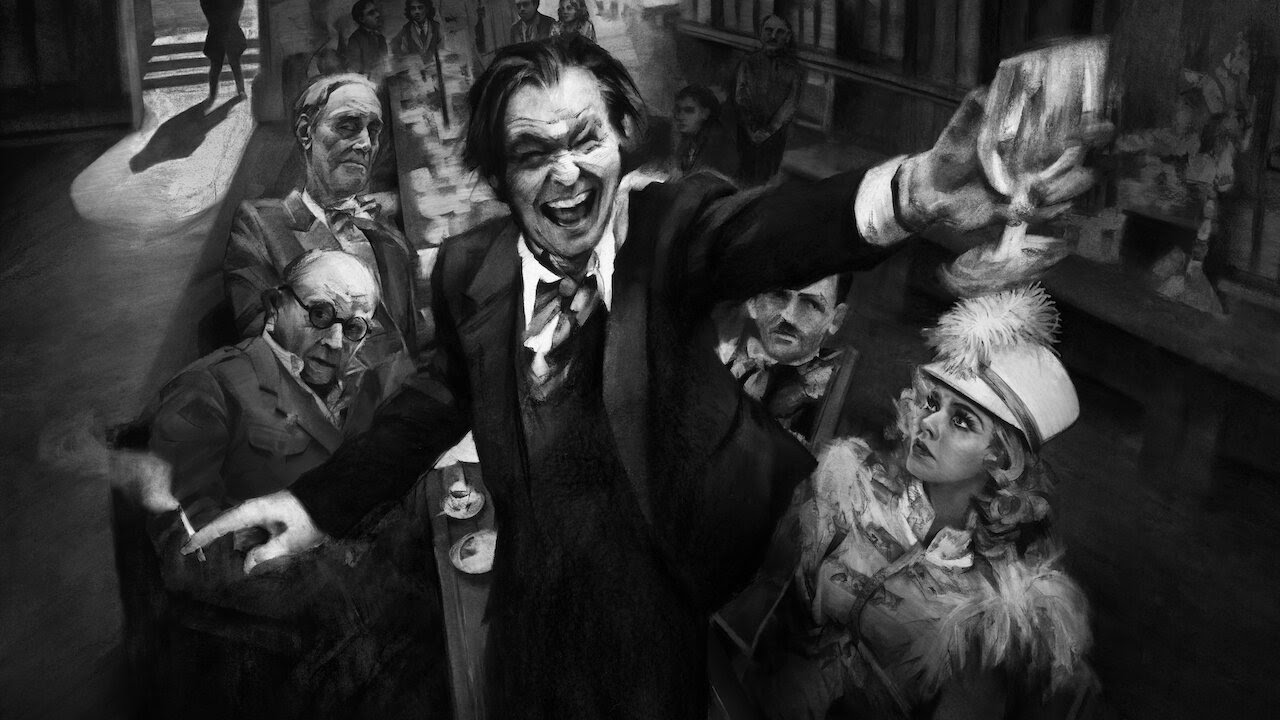 ‘Mank:’ David Fincher’s tribute to classic Hollywood and a technical masterpiece to behold

David Fincher, director of acclaimed films ‘Zodiac’ and ‘The Social Network,’ both inspired by real-life events, continues to replicate his success in authorial fashion with another true story of screenwriter Herman J. Mankiewicz and the creation of the script for “Citizen Kane.”

Netflix presents “Mank,” director David Fincher’s definitive love letter to 1930s Hollywood and a grim dive into the practices of its industry. Many of Fincher’s previous credits dealt in bleak subject matter which include “Seven,” a “meditation of evil” through the lens of a manhunt for a serial killer, and “Gone Girl,” a scrutiny of manipulative relationships with the backdrop of a murder mystery. While the story about the development of a movie script may seem tame for Fincher, the script is a somber reminder of economic hardship forcing people to forgo ethics to make ends meet.

Herman J. Mankiewicz (Gary Oldman) is a writer dealing with numerous vices while also struggling to stay afloat financially during the Great Depression. He is quite prominent in the film industry but constantly deals with excessive drinking and gambling as well as his propensity to speak unfiltered. The self-destructive actions have pushed him to the brink of being washed up until Orson Welles (Tom Burke), an up-and-coming producer, presents him the opportunity to write for his new film: “Citizen Kane.” As Mankiewicz recovers from a car accident, he is sent to live in the Mojave Desert on an isolated ranch with German housekeeper, Fraulein Freda (Monika Grossman) to care for him and young British secretary, Rita Alexander (Lily Collins) to dictate his screenplay.

Developed from a screenplay written by Fincher’s late father, the film is told nonlinearly from the perspective of the present in the 1940s with numerous flashbacks to the events from the 1930s similar to the structure of Fincher’s renowned masterwork, “The Social Network.” This method of storytelling is not unheard of but it allows the story to unfold in a more compelling manner as many exchanges of dialogue in the present seem to suggest some item of mystery from Mankiewicz’s past and each successive flashback ultimately gives more context to the current situation in the plot. The dialogue, especially from our titular character, is snappy and instantly quotable, harkening back to speech from the era and it comes to no surprise that Mankiewicz would have the wittiest lines, being the writer. An important aspect to praise is the screenplay’s ability to balance profound emotions while maintaining its humorous nature, like when Mankiewicz says to his wife, “Kiss the offspring,” reflecting both a compassionate father and a comical choice of words.

Fincher paints a somber picture of a writer who wants to express himself in his work but cannot risk losing his sense of idealism to appease his superiors. Through numerous exchanges with Mankiewicz’s secretary about his past, the audience can connect with Mankiewicz’s humanity as the initial impression of our titular character is overshadowed by his somewhat over-the-top and boorish behavior. The audience is slowly shown that Mankiewicz amounts to more than his crude actions. When he took a firm stance against Nazi Germany, a large market for the film industry, in one of his former screenplays, studios refused him.

He closely resonates with the words of Upton Sinclair, writer and socialist, as he believes in the corrupt nature of the wealthy class and wants substantial change for those affected by the Depression. He supports Sinclair’s run for governor of California, at odds with his employers, Louis B. Mayer (Arliss Howard), the boss of Metro-Goldwyn-Mayer Studios and William Randolph Hearst (Charles Dance), the powerful newspaper magnate and film producer.

With his debonair manner of speech and ability to feign emotion, Mayer has been able to build trust among many employees at MGM and popularity amongst his peers but it is clear that this inauthentic behavior is only for outward appearances. Faking emotion granted him the ability to slash his employees’ salaries in half without taking a pay cut for himself or risking a walkout, and Mayer even indifferently discards his handkerchief while leaving the funeral for MGM executive Irving Thalberg (Ferdinand Kingsley) as if Thalberg’s death was meaningless. Hearst, the main inspiration for the titular character of “Citizen Kane,” takes a liking to Mankiewicz as he is nothing more to him than a “monkey” for entertainment with his opinionated outbursts.

The script aptly places Mankiewicz in direct opposition to these two to highlight his position as an outsider as they display the monolithism and avarice of the film industry to which Mayer is subject. Mankiewicz declines to give money to Mayer’s political fund for Frank Merriam’s re-election out of disgust for him and what he represents. Some of the most compelling sequences occur at dinner parties when Mankiewicz is arguing his position on issues against Mayer and Thalberg to Hearst’s delight.

But regardless, both Hearst and Mayer were able to finance propaganda film reels to defeat Sinclair in the 1934 election. Mankiewicz also laments that Hearst was a former idealist who once valued the same beliefs as he and Sinclair in his rise to power. In a captivating monologue from Hearst, Mankiewicz realizes that he is an “Organ Grinder’s Monkey” (from the parable the film alludes to), as he is someone with no real power, working to only make money for his superior. In Mankiewicz’s final meeting with Welles, Mankiewicz requests credit for “Citizen Kane,” stating that the screenplay is, “the best thing I’ve ever written.” The full weight of this scene became evident on the second watch as this moment is the ultimate decision by Mankiewicz to not be an “Organ Grinder’s Monkey” from that moment on, either for Welles or for any studio.

In the midst of all this conflict is the perfect complement to Herman, his loving and supportive wife, Sara Mankiewicz (Tuppence Middleton) who attempts to manage her husband’s behavior at every event they attend. Their marriage is endearing and entirely convincing as each verbal exchange between them offers a new dynamic that builds layers to their relationship. In one of the introductory scenes of the film, Sara is tending to Mankiewicz in his drunkard state when he confides in her, “What year is it?… I should have done something by now,” lamenting about his presumably foregone legacy as a writer. At large gatherings, he loudmouths his opinion to incite conflict, while she advises him to keep his mouth closed to avoid it. But as the film progresses, Sara grows weary and tired with his antics as he rarely takes her counsel and Mankiewicz always asks, “Why do you put me with Schnutz?” The final statements she made to Mankiewicz at the ranch were blunt but crucial to firmly establish their bond and the admirability of Sara’s commitment to her husband. We come to fully respect the significant role that Sara played in Mankiewicz’s life when she is absent at the costume party he attends in the final act and he is left to act in his crude, unfiltered manner with no guidance.

The casting for these larger-than-life figures is superb as each performance is practically flawless. Oldman disappears in the role of the larger-than-life Mankiewicz in all his drunken and disheveled nature. Although the script demands Oldman to engage in borderline over-the-top behavior for the majority of the film, Oldman boasts his versatility as he can be surprisingly tender in quieter moments especially in scenes with his onscreen wife. Anyone familiar with Oldman’s work can instantly identify the specific timbre of his voice, but his American accent is virtually immaculate in “Mank” to the extent where one could have a difficult time remembering his native English accent. And while many could find Oldman, an actor in his 60’s, to be a distracting casting choice since the titular character is in his 30’s/40’s, I think it adds a nice touch as Oldman’s physical age adds to the believability of the bodily toll that the excessive drinking has taken on Mankiewicz, accelerating his aging process.

Seyfried transforms into the savvy Marion Davies with her magnificent “Brooklynese” accent, as her character labels it, and she unquestionably demonstrates her ability in the last act of the film as she is required to communicate emotions of tension and wounding through her facial expressions and no dialogue. Tom Burke’s impression of Welles, down to cloning his mannerisms and his iconic booming voice, made him the unequivocal choice to play the real-life director. And Charles Dance as Hearst, was impeccable casting as he commands the screen, and without a lengthy amount of screen time.

Aside from the recognizable faces of modern film like Oldman and Seyfried, “Mank” could masquerade as a genuine classic alongside other films from the era as Fincher visually replicates many of the techniques used by filmmakers of the time. Fincher’s commanding presence behind the camera shines through every frame of this film as he orchestrates a film perfectly reminiscent of the era down to the cinematography, the editing and the music.

The music fits perfectly alongside other music of the era and one might be shocked to discover Trent Reznor and Atticus Ross credited for the score. The two worked extensively with Fincher on previous projects and have orchestrated exemplary pieces of music for his films with their usual industrial rock style. With their score for “Mank,” they are able to recreate the era’s sound with the choice of instrumentation and effectively capture the mood of each scene in a style that implements the era’s musical techniques. In the last act of the film as character drama gradually intensifies, Reznor and Ross create an atmosphere of absolute dread to reflect the atmosphere but in the style of an orchestral score that could be found in “Casablanca.” Or even the jazzy, upbeat tones of the score as Mankiewicz saunters through the sets of MGM Studios or as Mankiewicz and his wife enter the nightclub during election night. An intriguing fact to note is that during the filming of “Citizen Kane,” many of the sets were built with ceilings constructed of fabric that hid microphones, so most of the sound came from the environment actors were in as opposed to modern overlay.

Aside from minor plot details involving a certain death and some side characters that could have more development, this film is a marvel in all its technical aspects and a wonderful meditation into the life of a man who never compromised ethics for his craft. While many have said this film can only be appreciated by film lovers who have viewed “Citizen Kane” and a vast knowledge of cinema, “Mank” is independent of “Citizen Kane” and is focused on the lives of the people who were involved in and were the inspiration for the film rather than the development of the film itself. It warrants a watch from not just film buffs but anyone from the general movie-going audience if they want a story with well-developed and absorbing characters. “Mank” will certainly be nominated for numerous Oscars in 2021, and if it won in every category it is nominated for, it would not be a travesty. As Mankiewicz stated, you cannot capture a man’s life in two hours but hope to “leave the impression of one” and Fincher’s impression of Herman J. Mankiewicz will certainly be lasting.

I thought the music was fantastic!