More than a monster: Dealing with angst and acceptance in ‘Adventure Time: Distant Lands’ 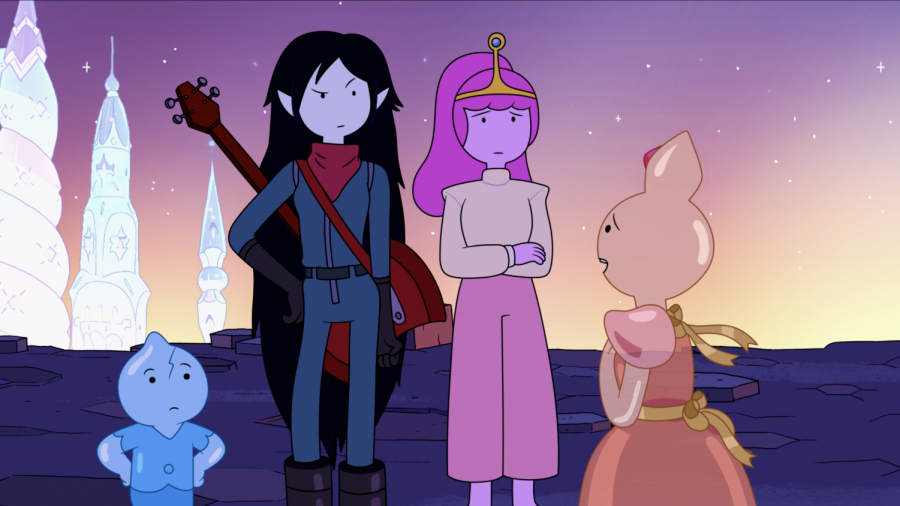 In the middle of an anxious, uncertain summer of quarantines and unanswered questions, Cartoon Network producer Adam Muto gifted us the first special in “Adventure Time: Distant Lands,” an epilogue series that promised to bring us along on a few more adventures with Finn, Jake and the rest of Ooo’s heroes.

The eponymous first episode “BMO” weaved an inventive origin story for everyone’s favorite philosophical space cowboy turned lifelong adventuring companion. But much like the first few seasons of “Adventure Time,” the lighthearted prequel felt like something to whet our appetites and prepare us for heartier stories yet to come.

The first of those stories is finally here. “Obsidian,” released Nov. 19, shifts the spotlight to a pair of heroes—or rather, a couple: Princess Bubblegum (PB) and Marceline the Vampire Queen (voiced by Hynden Walch and Olivia Olson, respectively). After their long-hinted-at relationship was confirmed canon in the original series’ showstopping finale, Bubblegum and Marceline, ship-named “Bubbline” by the fan community, quickly gained recognition even among non-fans as one of the first lesbian couples to share an on-screen kiss in an animated series.

In “Obsidian,” the courageous young hero Glassboy (voiced by Michaela Dietz) summons Marcy and PB to the far-off Glass Kingdom to assist the See-Thru Princess in defending her kingdom against the magma dragon known as Molto Larvo. Centuries ago, Marceline subdued Larvo with the raw power of her punk rock musical stylings, but over the years, her musical essence has changed, so she and Bubblegum must tap into new forces to save the Glass Kingdom. Pair that present-day heroic tale with the concurrent backstory retellings of Marceline’s loss of her mother and breakup with Bubblegum, and you get compelling new characters, a rockin’ original soundtrack and delicately intertwined story arcs about emotional openness and self-acceptance.

After a brief expositional scene to introduce the Glass Kingdom conflict, “Obsidian” kicks off with an intro credits montage that’s all gratuitous fanservice, and we aren’t complaining. Marcy and PB are living out their fairy tale ending together, baking pies and reading comics at Marcy’s house in the domestic bliss they always deserved. The scene is set to a new original song, “It’s Funny,” that perfectly delivers the vibe of their newfound happiness, with subtle hints of suppressed apprehension that set the stage for drama to unfold later.

We get a few more fanservice moments—Simon performs “Remember You” at a Candy Kingdom open mic night, with Dirt Beer Guy and other kingdom regulars in attendance—and then the real action starts. Marcy and PB agree to return to the Glass Kingdom with Glassboy, unleashing the insecurities and self-doubts of their complicated history together.

A new original song from Marceline, “Woke Up,” flashes back to the first time she and PB came to the Glass Kingdom, and it’s a breakup anthem that’s nothing short of a banger. She calls out Bubblegum for her intellectual haughtiness, emotional insensitivity and troubling dictatorial tendencies in her management of the Candy Kingdom. The song is classic Marcy all the way, channeling the same hardcore, screw-it-all aesthetic of her first ever appearance way back in Season 1’s “Evicted!”

But this time, angst doesn’t defeat Larvo. PB steps in with a characteristically scientific approach, and the rift reopens between her inherent savior complex and Marcy’s free-spirited, “go with the flow” nature. It’s soul-searching time.

More flashbacks take us to Marceline’s childhood with her mother, and we get a firsthand look at the trauma we always knew lurked just beneath the surface—this time through the lens of two new songs. First, “Red Light” is young Marcy’s innocent hymn to the red blinking light in an abandoned nuclear shelter. But when it’s revealed that Glassboy followed present-day Marceline back to the same shelter, his angsty anthem “See Through” mirrors her outburst towards Bubblegum in “Woke Up” and reminds her that she’s just not that “angry young punk” anymore. It’s a moment that Glassboy doesn’t fully understand or internalize as a hero just entering his own rebellious phase, but it gives Marceline subconscious permission to move on from her youth, as long as she accepts and makes peace with her past. This is an especially tough realization for someone immortal like her.

Armed with this new self-knowledge, Marceline returns to the Glass Kingdom to find PB’s scientific logic has failed. The two venture deeper into Larvo’s lair, and, trapped there, they share a heart-to-heart about how far they’ve come together.

We never really doubted their devotion to one another, but Marceline’s last song of the special confirms their commitment to moving forward together. Titled “Monster,” it’s a slower jam about how the trauma surrounding her mother’s death reflects on her inability to open up to Bubblegum. Set to a short montage of Larvo’s equally tragic backstory, “Monster” teaches that pain only festers if you try to shove it down, and to have an open relationship one must be open themselves. Just as Marceline let others into her heart and allowed them to help her grow (albeit after centuries of emotional repression), so must Larvo, and thus the dragon gives up his mission to destroy the Glass Kingdom and its people.

To close out the special, Glassboy and See-Thru Princess reconcile, at which point Glassboy sings a new, deeply introspective piece titled “Eternity with You.” Marceline and Princess Bubblegum’s rocky relationship history and firm commitment to positive growth teach the people of the Glass Kingdom that cracks in one’s glass are nothing to be ashamed of; rather, they’re what makes you who you are. Along with surprise appearances from adult versions of Finn and Bronwyn, Glassboy’s slow, sentimental love song makes this sweet ending even sweeter.

For more than a decade now, “Adventure Time” has been one of many shows to subtly ask its audience about what might come after the apocalypse. Marceline’s mother’s story puts this question front and center, with the question “after nihilism?” spray-painted very visibly on a gas station in which she and her daughter take refuge.