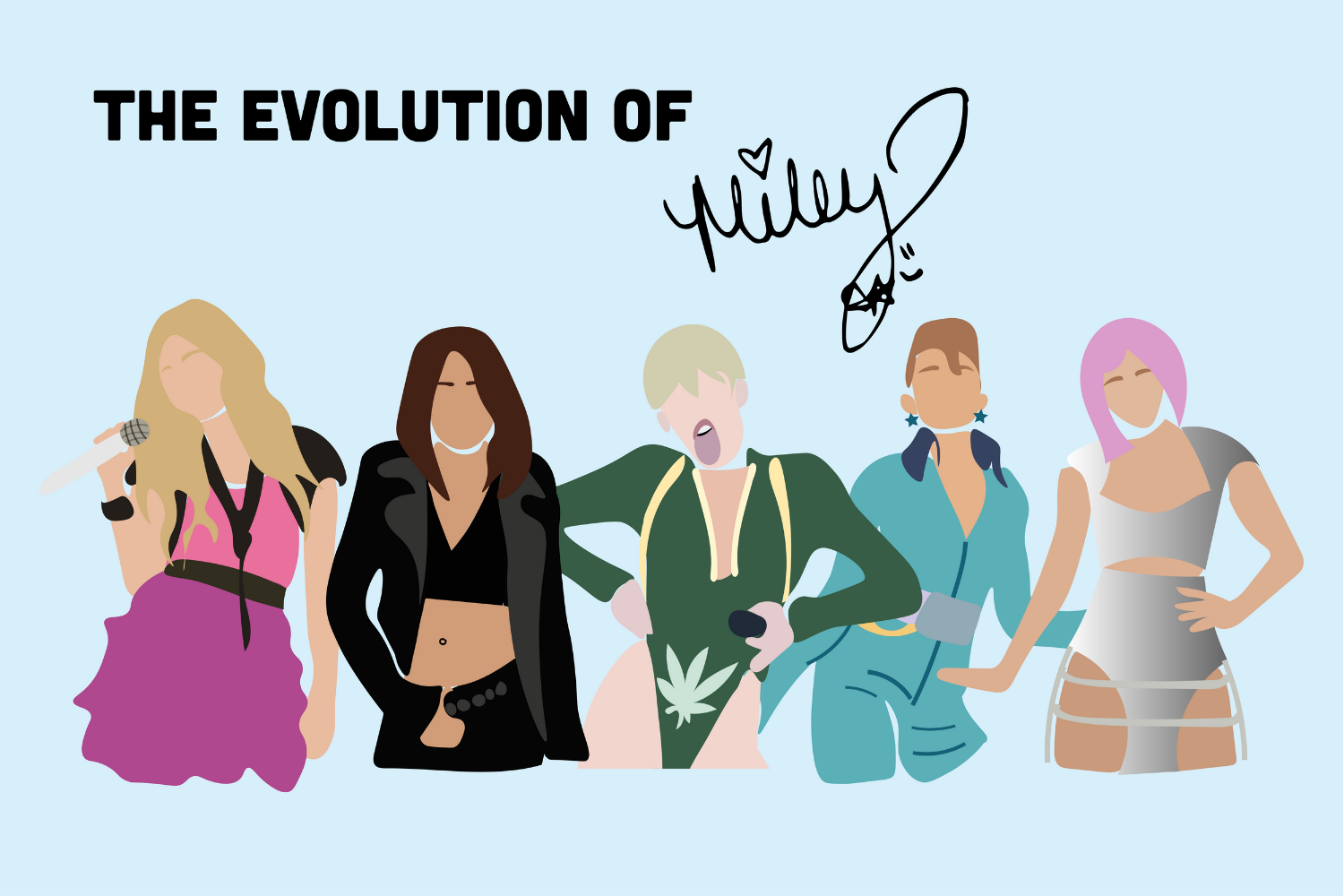 An analysis of Miley Cyrus’s pop evolution as we prepare for her new album, “Plastic Hearts” (Hustler Multimedia/Emery Little) (Emer)

An analysis of Miley Cyrus’s pop evolution as we prepare for her new album, “Plastic Hearts” (Hustler Multimedia/Emery Little)

The evolution of Miley Cyrus: Rock and roll Miley is here

Whether you remember Miley Cyrus as the young lead of your favorite childhood TV show or the rebellious 20-something swinging from a wrecking ball and twerking at the VMAs, she has left a lasting impression on the world of pop culture through her many transformations. As Miley enters a new rock-and-roll era with her upcoming album “Plastic Hearts,” let’s take a walk down memory lane and look at the evolution of Miley Cyrus.

Cyrus was in the limelight from a very young age, gaining stardom with her breakout role as Miley Stewart in the hit Disney Channel show, “Hannah Montana.” She played a stylish pop star with a double life and was the envy of every pre-teen in the 2000s. Her signature music style was pop with a touch of country and clearly censored by Disney. The show aired for five years, meaning we can see some evolution in her music and appearance, but it is clear that over the course of these years she was still seen as a Disney poster child.

She can’t be tamed

Cyrus’s album “Can’t Be Tamed” was released in 2010 and was the first public display of her rebellious side. The album had bolder lyrics and raunchier live performances than her “Hannah Montana” musical works. After this album and the end of the Disney Channel show, Cyrus did not release much music and focused more on acting. In 2012, however, Miley released her Backyard Sessions where she covered other artists’ songs, and she gave us a closer look at her personality on a more intimate level. I highly recommend checking these out on YouTube if you want to experience her raw musical talent.

In 2013, Cyrus’s wild side truly came to life with the release of her studio album “Bangerz.” While some might think this album just represents her crazy phase, there are some truly fantastic songs on this album, such as “We Can’t Stop” and “Wrecking Ball,”  which took the world by storm when they topped the charts.

More lowkey songs like “Adore You” and “Maybe You’re Right” showed Miley’s emotions and connected her with her fans. This era brought us Cyrus’s new blonde pixie cut, which was the first of its kind among her musical peers, and a rowdy 2013 VMAs performance with Robin Thicke. Then, in 2015, Miley released the album “Miley and Her Dead Petz.” Never heard of that album? That’s probably because it had some very odd songs, and none of them became hits—though I would say “Miley and Her Dead Petz” shows off an even crazier side of Cyrus than the one we hear in “Bangerz.”

In 2017, Cyrus released the dreamy single “Malibu,” which became pretty popular as the debut release from her sixth album, “Younger Now.” This album is definitely not one of Miley’s most popular, garnering mixed reviews. It seems that, during this time, Miley was still trying to find herself, with the release of this album toning down the provocative image she created for herself in previous years.

This era is an intriguing one, with a variety of unconventional musical releases. In mid-2019, Cyrus released the EP “She is Coming,” an interesting mix of songs that included the popular song “Mother’s Daughter” and featured a track with drag queen RuPaul. Shortly after this, Miley starred in an episode of Netflix’s popular thriller “Black Mirror,” where she plays a troubled pop star named Ashley O. She performs two catchy songs in this episode that were later released outside of the show, but they’re far from Cyrus’s true musical style, as they were intended to be sung by the fictional Ashley O (whose storyline many compared to Cyrus’s “Hannah Montana” years). Also during this time period, she released the popular and emotional song “Slide Away,” showcasing her struggles with her separation from Liam Hemsworth.

Modern-day Miley Cyrus is exciting for all-new reasons. Right before our eyes, she’s going through her newest transformation as she embraces her rock-and-roll side. In mid-2020, she released the song “Midnight Sky,” giving us a glimpse into her new rock album, and the single has been doing very well so far. She has also performed a number of rock covers that have since gone viral across social media platforms, including covers of “Heart of Glass” and “Zombie.” Her rasp and power truly suit the rock genre, and this new style will appeal both to Cyrus’s long time fans and lovers of classic rock.

On Nov. 27, we will finally receive a Miley Cyrus rock album, “Plastic Hearts,” and with cameos from Billy Idol and Dua Lipa, it promises to be an epic new musical endeavor.