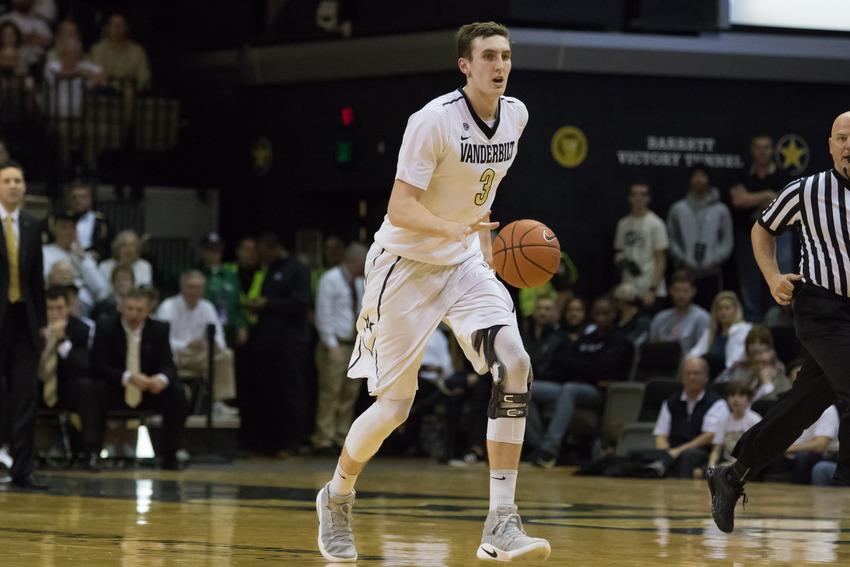 Up 15 points with four minutes to go against Iowa State on Saturday, shades of Tuesday’s Arkansas game started to show themselves for Vanderbilt.

The Commodores looked sloppy down the stretch in the form of turnovers and missed free throws, which allowed Iowa State to pull within five. However, the outcome of Tuesday’s collapse wouldn’t repeat itself, as Vanderbilt was able to hold on for the 84-78 upset.

It was a game that netted the Commodores their first victory in the Big 12/SEC challenge era on the back of lights-out shooting from beyond the arc. Of course, anyone familiar with Vanderbilt basketball knows that the three-ball is this team’s calling card, but 13 of 30 from three is a rarity in any box score, especially considering the fact that it only took 52 shots from the field.

While the threes were falling in bunches, they weren’t all coming from the usual suspects.

Nolan Cressler had made just one of his last twelve triples entering Saturday’s contest, but he came up big, knocking down all four of his three-point attempts en route to a 20-point performance. It was the most points the transfer had scored in a game since his days at Cornell, and it gave the offense the spark it needed to take down a tournament-caliber team in Iowa State.

The Cyclones’ efforts were spear-headed by Monte Morris, who finished the game with 25 points on a combination of step-back jumpers and tough layups in the lane over Jeff Roberson and Luke Kornet. Morris, a senior All-American point guard, also broke the Iowa State all-time assists record, recording his 666th career assist on a three-point jumper from Matt Thomas late in the second half. He also held Riley LaChance to seven points, his lowest total in over a month.

Unfortunately for the Cyclones, the rest of the team struggled to follow his lead.

Vanderbilt started the game hot, scoring on three of its first four possessions, but Iowa State roared back on a three straight triples from Matt Thomas. When the Commodores started to run Thomas off the three-point line, Morris picked up right where he left off, hitting two straight jumpers to cap off a 15-2 run.

Just when it looked like the Cyclones were going to pull away late in the first, Matthew Fisher-Davis broke the scoring drought with a three, and Vanderbilt went on a 9-0 run of its own. After a couple of steals and a three from Morris, Cressler closed the half with a three to tie the game at 33.

Coach Bryce Drew’s group has had a reputation for sluggish second halves, but it came out of the locker room on fire, with Cressler tossing an alley-oop to Fisher-Davis on the first offensive set, followed up by a three from Kornet. Cressler connected yet again from deep, and Fisher-Davis found his stroke, knocking down two more threes to ignite the crowd at Memorial Gym and give Vanderbilt a commanding 13-point lead.

The Cyclones responded by playing a smaller lineup, placing Deonte Burton alone in the post, where he accumulated a double-double with 13 points and 10 rebounds. However, it left a void in the paint that Vanderbilt was able to exploit with Kornet and Roberson, who had two of their best games of the season.

Vanderbilt’s two seniors, Kornet and Cressler, combined for 41 points, 10 rebounds and six assists. It was the kind of leadership that this team needed from their seniors coming off an embarrassing collapse against Arkansas.

“Their energy and their excitement to play and improve on what happened on Tuesday set the tone for our whole team,” said Drew of his seniors.

That excitement was on display after a couple of and-ones from Kornet to build on Vanderbilt’s lead, but that’s when it started to lose its advantage. Six late points from Morris and a three from Thomas brought the lead down to nine, and Burton closed the gap to five with just over a minute to go.

Iowa State’s press clearly affected the Commodores late, as LaChance had trouble holding on to the ball, committing two crucial turnovers down the stretch. Iowa State failed to capitalize however, and the Commodores were able to hold on.

“It was déjà vu all over again those last five minutes,” Drew joked.  “I thought Luke was at another level the last three minutes with his ball handling.”

Kornet had committed two inexcusable turnovers late against Florida and Arkansas, leading to a missed Gators game-winner in Gainesville and what turned out to be the game winning free-throws this past Tuesday. A no-turnover game for Kornet on Saturday was key in holding on to the lead down the stretch, leading to Drew’s biggest non-conference victory in his first season at Vanderbilt.

The Commodores will look to hold on to this momentum as they take on Texas A&M down in College Station on Tuesday.