One resolution calls for the university to begin divesting from fossil fuels by the end of the 2020-21 academic year. 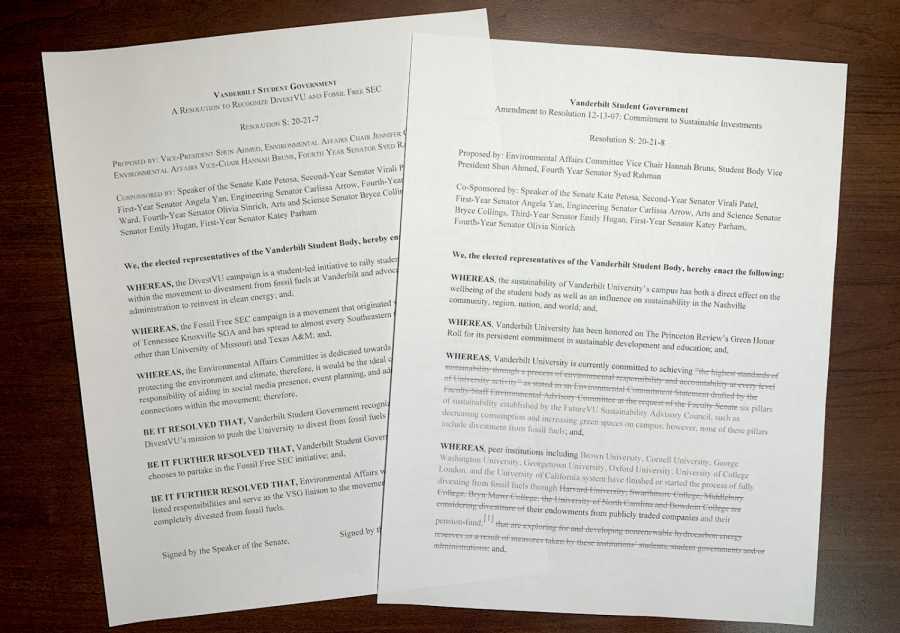 A number of VSG senators co-sponsored the resolutions to demonstrate their support for the cause. (Hustler Staff/Jonathan Liu)

UPDATE: This piece has been updated with the specifics of responses from VSG senators.

The Graduate Student Council (GSC) will consider passing a bill on Nov. 4 to further advocate for the cause, according to Ph.D. student Miguel Moravec.

According to its 2020 Financial Report, the university has invested more than $300 million in natural resources, including oil and gas production, energy and related services.

The first resolution recognizes DivestVU and the Fossil Free SEC—a coalition of 12 schools promoting the divestment movement—as accredited organizations under VSG which, according to DivestVU Co-Founder Emily Irigoyen, allows them to work more closely with groups like VSG’s Environmental Affairs Committee.

The second resolution serves as an amendment to an expired resolution which maintained that the university would divest from fossil fuels within five years. According to VSG Environmental Affairs Committee Chair and DivestVU Co-Founder Jenn Coen, the amendment now calls for the university to begin the process of divestment by the end of the 2020-21 academic year, redirecting those investments to sustainable solutions instead.

VSG Vice President Shun Ahmed was involved in the preparation of both resolutions. She comments that the unanimous decisions to pass them speak to the importance of the cause.

“You want to pass a bill when you’re recognizing a movement, and it was natural to establish a connection between our organizations,” Ahmed said. “Now, VSG can publicly put its resources, time and energy into helping DivestVU.”

Since the passing of the two bills, Irigoyen said that DivestVU has received 10 endorsements from its student organization support form. In addition, as of Oct. 31, DivestVU’s divestment petition has collected 769 signatures.

Moravec said that he and two other PhD students—Brad Davidson and Natalie Pak—will co-sponsor another divestment bill to the GSC, establishing solidarity with the efforts of the undergraduate community.

According to Irigoyen, DivestVU has been closely working with Ahmed on a number of efforts, including organizing a meeting with Vice Chancellor for Investments and Chief Investment Officer Anders Hall. The goal of the meeting, Irigoyen said, is for Hall to bring up action on the issue of divestment to the Board of Trust, a group of 24 trustees that governs the university.

Irigoyen added that DivestVU will be holding a climate change town hall on Nov. 17 with the help of VSG’s Campus Alliance Committee to recruit new members and discuss the connection between climate change and divestment.

“Vanderbilt is investing millions of dollars in supporting the fossil fuel industry, so we want stakeholders from our community to see how climate change has affected their lives, as Vanderbilt is, in part, responsible for that change,” Irigoyen said.

According to Moravec, DivestVU’s new supporters include Joyce Chaplin, a former Vanderbilt professor currently teaching at Harvard University, where she helped co-found the divestment movement.

“Vanderbilt has a chance to lead other universities, from the SEC to Harvard, on this important ethical and environmental issue,” Moravec said. “We hope the administration will come to the table and not squander this special chance to really project Vanderbilt’s commitment to science, sustainability and the well-being of our global community.”

Coen attributes DivestVU’s success so far to the precedents set by past movements within the university.

She said, “Looking at the history of Vanderbilt, we’re not the first divestment movement to start, but hopefully we’re the last.”