After a two-week hiatus due to COVID-19 issues and a bye week, Vanderbilt fell to Ole Miss 54-21. 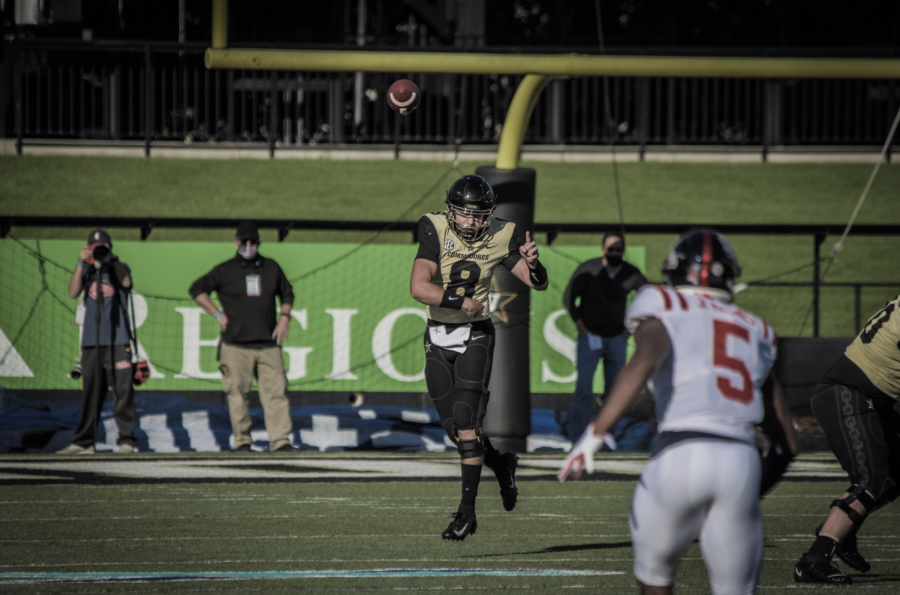 Halloween was definitely a spooky one for the Vanderbilt Commodores this year as they were thrashed by the Ole Miss Rebels by a final score of 54-21.

Perhaps no sequence defined the Commodores day as much as one just a few minutes into the first quarter where they had three consecutive, inexcusable penalties. Utilizing their up-tempo offense, Ole Miss drove the ball all the way down the field to their goal line when Vanderbilt jumped offsides on back-to-back possessions, the second of which ended in a Rebel touchdown anyways. On the ensuing kickoff, Vanderbilt was flagged for having two players on the field wearing the same number as both Michael Owusu and Jayden Harrison were wearing number 88 (Owusu later switched to 40).

Whether it was the two weeks without a game, the quickness with which the Ole Miss offense moved or something else entirely, Vanderbilt looked frazzled and out of sync the whole game, especially on defense.

The Commodores failed to score in response to the Rebels opening touchdown but Jared Wheatley’s first career punt pinned Ole Miss at their own seven yardline. Vanderbilt immediately put Ole Miss in a third-and-long situation but Matt Corral connected with his top receiver Elijah Moore for a 39 yard hookup. Two plays later, the Rebels were facing another third-and-long and yet again the Vanderbilt defense was unable to make the big play, this time surrendering a 13 yard rush to Snoop Conner. The Rebels ended that drive with a 9 yard touchdown pass that Corral lobbed over the top to tight end Kenny Yeboah.

“We had a couple third down situations but just didn’t do a good enough job of being able to get them off the field,” Coach Derek Mason said. “I saw a third-down run, dices for about eight yards. The calls were getting in; I still felt like we were a step slow… I don’t think it was until late in the ball game that we were able to stop any of their drives.”

The Commodores followed the Rebels 93 yard touchdown drive with a three-and-out and a shanked punt that went a grand total of four yards. A 36 yard touchdown reception by Moore on the very next play increased the Ole Miss lead to 21-0.

Vanderbilt was finally able to get on the board in its next possession as Ken Seals tossed a 43 yard touchdown pass to tight end Ben Bresnahan off of a beautifully designed play by Todd Fitch.

The game was already out of reach, however, as the Rebel offense was clicking on all cylinders and showed no signs of slowing down anytime soon. They followed Vanderbit’s touchdown with a 77 yard touchdown drive of their own, capped off with a 1 yard rush by Moore.

Both teams were able to tack on one more touchdown before halftime with Vanderbilt’s coming on a nice grab by Chris Pierce on a jump ball in the end zone. The Rebels led 33-14 at the half, the only blemishes to their offensive onslaught were a missed extra point and a failed two-point conversion.

The Vanderbilt defense was unable to keep the combination of Corral and Moore in a check and Ole Miss finished the half with 413 total yards. Corral completed 22 of his 25 pass attempts for 318 yards, four touchdowns and a 247.6 passer rating. Moore was perhaps even more impressive with 12 receptions for 223 yards and three touchdown grabs to go along with a rushing score.

“Something that we didn’t do well enough is get checked out of some of the pressure stuff and get to some zone stuff to give [the secondary] some relief,” Mason said. “That’s on our coaching staff, that’s on us collectively as coaches. We’ve got to be able to get those guys out of some of those situations to make sure the ball gets checked down. I don’t mind a hitch or an out but there were way too many times they found the explosive man because we were in man coverage. There just wasn’t enough help because the pass rush just did not get home.”

The second half was more of the same for both teams. Vanderbilt was unable to score on its opening drive while Ole Miss easily drove down the field for another touchdown and a successful two point conversion. Harrison fumbled on the ensuing kickoff and the Rebels took full advantage of the good field position. Yeboah recorded his second touchdown reception of the day and the Ole Miss lead increased to 48-14.

Even backup quarterback John Rhys Plumlee had success for the Rebels. He replaced Corral late in the third quarter and tossed a 37 yard touchdown pass to Braylon Sanders.

With just over five minutes left in the game, Vanderbilt was able to put together a nice drive and cash in at the goal line off of a Keyon Henry-Brooks rush, bringing the final score to 54-21.

The story of the game was Vanderbilt’s inability to slow down the duo of Corral and Moore. A week after throwing six interceptions, Corral ended the game a blistering 31-34 with 412 yards and six touchdown passes. Moore finished with 14 receptions, 238 yards and four scores. His 238 receiving yards were good for an Ole Miss record.

“He just killed us today with double moves,” safety Dashaun Jerkins said of Moore. “We knew coming in that he would run that and we just didn’t execute on stopping that, and he beat us on it.”

It will go down as just a footnote in this game compared to the dominance of Corral and Moore, but Seals had perhaps his best showing of his young career. He completed his first ten passes of the game and finished 31-40 for 319 yards and two touchdowns. He also set the record for most passing yards in a game by a true freshman quarterback at Vanderbilt.

The Commodores return to action next week when they travel to Starkville to face the Mississippi State Rebels.