The Office of Student Accountability told Swipes for a Cause, a student-run organization that donates extra meal swipes to food banks, to cease operations Oct. 27 due to security concerns. 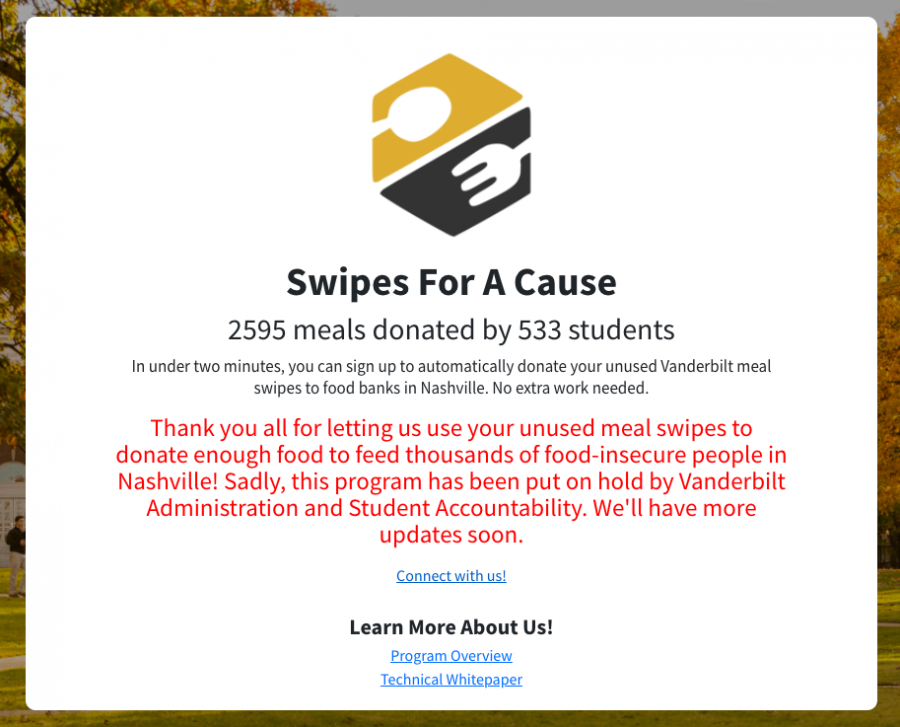 Swipes for A Cause was put on hold as a result of Vanderbilt’s Oct. 27 notice regarding student privacy. Screenshot taken of https://www.swipesforacause.org on Oct. 30. (Hustler Staff/Immanual John Milton)

Following an order from Vanderbilt Student Accountability, Swipes for a Cause (SFAC) has put their program on hold, per their website.

SFAC is a new, unregistered student-run organization that looks to donate unused student meal swipes to local food banks by allowing students to log-in with their VUNetID information on their website and select which days they’d like to donate.

Rehders is on The Hustler’s Multimedia staff.

The Office of Student Accountability, Community Standards and Academic Integrity said in an Oct. 27 email that students are not allowed to share university passwords, use another person’s credentials to access systems or allow other people access to systems requiring credentials.

Rehders said in a statement to The Hustler that the team is still working on getting more specifics from the university. The organization is working to schedule a meeting to address the administration’s concerns and resume operations.

“The main problem is that there’s a misunderstanding about the current form of the operation, and therefore [the administration is] not excited about it happening,” the statement read.

Vanderbilt has not yet responded to a request for comment.

Kalupahana said safety is of “utmost importance” to them; the system logs into students’ accounts only once and then discards the credentials. He said that SFAC can not use that identifier on anything except the server that issues the order.

“Your vuNet ID and password are not stored anywhere,” Kalupahana said. “So, we can’t touch any of your grades or anything on YES. All we do is store a custom identifier for your GET account that we can use to order meals for you. Plus, your Duo code is valid only once.”

Vanderbilt Student Government (VSG) has been working with SFAC for the last couple of weeks per Student Body Vice President Shun Ahmed.

Ahmed said the student accountability situation halted some of the progress with VSG, and that administration is reviewing the organization

“Until that accountability situation is over, the organization is fully reviewed and the administration knows where the problems are, we can’t do much on the VSG end of things,” Ahmed said.

“It’s something that a lot students have been asking for a long time, and they simply took it into their own hands,” Ahmed said. “We want to give them a platform so that they can continue this.”

Ahmed is on The Hustler’s Multimedia staff.

How does Swipes for a Cause work?

The core idea behind SFAC is to donate already-unused meal swipes to local food banks, per Kalupahana. He said that this idea was one that many students were considering this Fall simply because they realized that most students rarely use all their allotted meals every week.

“None of the previous solutions had a well-defined, repeatable system that was safe, simple and smart,”  Hanson said. “Throughout the process, these have been our core ideals.”

Gebo emphasized that the system was designed to be “simple.” He said that the single website sign-in system allows students to log in once and never worry about donating food again.

“You go to swipesforacause.org. You click register, type in your vuNET ID, password and Duo code, log in and that’s it,” Kalupahana said. “You get a confirmation text in a minute, and that’s all you have to do. We want this to be as low-friction as possible. The link you are sent works all week, and you have the option to disable donation of any of the days.”

The algorithm ensures you don’t run out of swipes, so that users have sufficient swipes throughout the week, according to Kalupahana. Per Gebo, at 9 p.m., their system goes through everybody who has signed up and checks if they have extra meals to donate, and if they do, the system makes one or more orders to a Munchie Mart for them, ordering only non-perishable food items.

SFAC was picking up orders from the Branscomb, Kissam and Commons Munchie Marts before being shut down, per Rehders.

Response from students and potential for expansion

Hanson said that the response from students has been “overwhelmingly positive.” Rehders spoke about how students who reached out to them with security concerns were reassured by their open communication and easy explanation.

According to Sliman, while the idea is infinitely scalable, they are currently looking to expand to all the Munchie Marts on campus first. He said that the priority was to donate the maximum amount of meals per day and figure out a means of transportation. Kalupahana also said that there is room to grow within the university system.

“We do ordering through the GET system, and hundreds of other universities across the United States use this system,” Kalupahana said. “In fact, Lipscomb University uses this and they’re right down the street. There is a massive point of expansion.”

Hanson hopes that despite starting halfway through the semester, the SFAC team could represent upwards of 500 meals a day. Sliman also shares the sentiment.

“I want to see if we can hit 10,000 meals by the time we leave at the end of the semester,” Sliman said. “It may or may not be attainable, but if we scale at the rate that we’re planning on, it could be possible.”

Per Sliman, the biggest obstacle was scaling. Sliman also spoke about working on getting more people to transport meals back and forth from the Munchie Marts.

“If we order more meals, we end up needing more runners, boxes, storage space, cars, parking spots, dollies, packing tape, et cetera,” Sliman said. “If we don’t have enough of any of those things, it bottlenecks the whole system.”

Hanson said that SFAC has spent about $300-400 out of pocket on a few small costs. He also said that even after scaling up, he does not expect expenses to exceed $1,000. SFAC is also searching for donors or small brand partnerships to help keep out-of-pocket costs minimal, per Hanson.

“We work to create a safe, smart, and simple solution that allows every student to do their part, one swipe at a time,” Rehders said.