Here for the Wrong Reasons: Episode 3 of ‘The Bachelorette’ Season 16

A recap of the third episode of the latest season 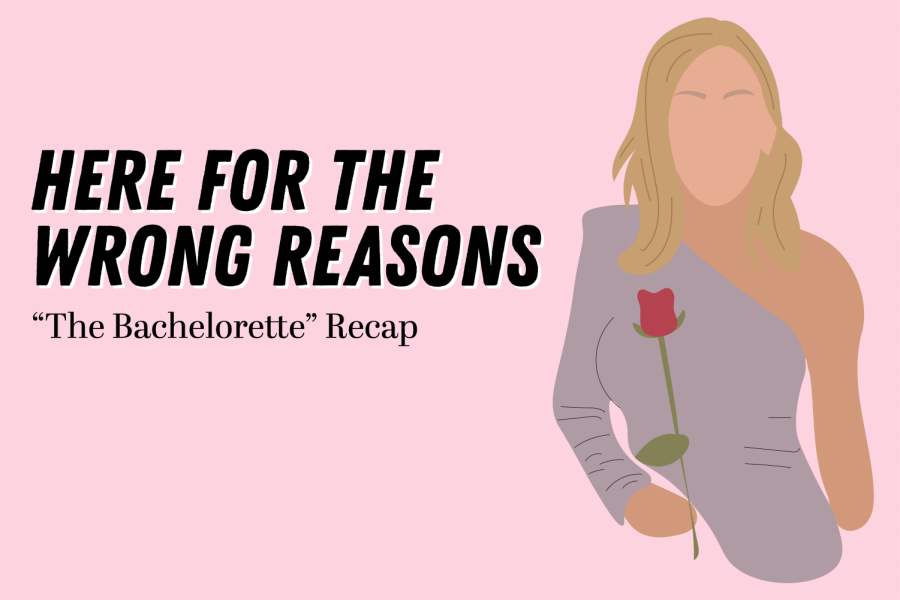 Shout it from the rooftops—this season no longer totally sucks! Chris Harrison declares that this show is about exposing people, and he’s spot on. Last week, it was physical exposure (the strip dodgeball date that will continue to be discussed for as long as this franchise shall live). This week, it was character exposure: Yosef solidifies his status as this season’s resident slut-shamer, Clare confirms our suspicions that she’s the “WBOAT,” or Worst Bachelorette Of All Time and—SPOILER ALERT—the show exposes itself, finally revealing that this season will be flipped upside down when queen Tayshia Adams takes Clare’s Bachelorette crown. No official word yet on how this goes down, but rumor has it that the producers wanted to get rid of Clare all along and booted her from her own season, which might be the best conspiracy theory I’ve heard yet. I didn’t think it was possible to be too much for a reality show to handle, but it just goes to show that the devil works hard, but the “Bachelorette” producers work harder.

No doubt about it, Yosef will go down as one the worst guys in the franchise, which I honestly think might have been his main goal in going on the show. Not only was his explosive confrontation with Clare a master course in double standards and toxic masculinity, it was just plain mean for no good reason. First, he gives Clare major pushback for the “atrocity” that was the “completely classless” strip dodgeball date—never mind that the producers plan the dates, not the lead—before diving straight into attacks on her character. He declares that he “expected more from the oldest Bachelorette,” and that Clare is “not setting the right example for my daughter,” before shooting a brutal “I’m ashamed to be associated with you” directly into Clare’s heart. Let’s pause here for a second—did anyone catch what Yosef is actually accusing Clare of? Because I have no clue. In former Bachelor villain showdowns, there have been actual accusations made. Luke P. slut-shamed Hannah Brown after her fantasy suite episode and Taylor went after Corinne for her lack of emotional intelligence. However, Yosef is attacking Clare solely for attending a date with naked men present. He’s probably just pissed that Clare didn’t want to see him shirtless. Anyway, Clare is rightfully offended and brings back her one iconic line from her time on Juan Pablo’s season: “I would never want you to be the father of my child.” Twist that knife, Clare. As if Yosef hasn’t been enough of a d*ck already, he chooses to further solidify his villain status by screaming the following at her:  “Remember you’re almost 40,” followed by a very classy “You’re completely classless, Clare!” You’ve heard of BDE, but this is an exemplary display of LDE.

Cue the romantic music! After Yosef storms out, knight in shining armor Dale rides in on his steed to comfort his damsel in distress. There is also an entire room of men telling Clare that everything is okay, to which Clare is oblivious. She is just so relieved to be in Dale’s arms, and from this point in the episode on, they are basically man and wife. In a chat with former Bachelorette DeAnna Pappas, Clare reveals that she kept a pair of Dale’s pants that he ripped on one of their dates…we all knew that Clare has a thing for stripping, but if this isn’t a Joe from “You” move then I don’t know what is. Next, Clare sends the rest of the guys “New phone, who dis?” texts and continues doodling “Mrs. Clare Moss” in her journal. It’s pretty clear that Dale and Clare need to get a room already…oh wait, they did, and it’s Clare’s very own hotel room during the cocktail party! That’s not gonna stir up any drama. Oh, and Clare called Dale her “fiancé” during a talking head interview, so there’s that.

Right off the bat, Clare announces that there will be a group date, then promptly cancels it in favor of heading straight into that night’s cocktail party. This was highly embarrassing for the irrelevant contestant who proudly boasted that he was going on the “group date with all of her favorite guys,” Clearly, he hasn’t seen Clare’s “C Hearts D” lower back tattoo yet.

At the cocktail party, Dale announces that he’s going to steal Clare away for just five minutes and forces everyone to group hug, which was a very weird and a bold assertion of power on Dale’s part. The happy couple trots off, not to be seen again for another hour which is ~suspicious~ and an array of the jilted contestants sit on a couch wearing various shades of blue (their shirts aren’t the only things that are blue). The camera then moves to Clare’s hotel suite, where she and Dale are making out on the bed and professing their undying love for each other until Eazy interrupts them (Alexa: play “It Wasn’t Me” by Shaggy). Eazy quite literally mutters the phrase “cool cool cool cool,” and Dale tries to play it cool but almost accidentally eats dog treats on his way out the door in a Michael Scott-esque display of cringey-ness. Clare suddenly remembers that there are still a bunch of non-Dale contestants around and reluctantly spends time with them, including Eyebrows Ed who is drinking his beer with a straw. The rest of the men basically recreate the iconic Gretchen Wieners quote from “Mean Girls” and scream “We should totally just stab Caesar!” By Caesar, they mean Dale, and by stab, they mean roast.

Which brings me to the “Bachelorette’s Roast” group date. Bennett was by far the most savage comedian, cementing his role as my favorite guy on this season. Any guy who knows how to lampoon and looks like my Clark Kent/Cape Cod dream boy? Yes, please. Each of the men went straight for Dale, which was hilarious and also majorly pissed off Dale’s wife Clare who whined that “You can’t hate on love, like, you can’t hate on it!” Sure, love’s great and all, but these guys quarantined just to be around you, Clare—maybe throw them a bone every so often? During the following cocktail party, Clare brings up Dale in each conversation she has, even though Dale is not even on the date. Rightfully, this drives the other guys nuts, including poor (okay, wealthy), sweet, hot Bennett, who politely requests to talk about anything other than Dale. But, unfortunately, Clare can’t think of a single other topic of conversation. Talking about a fellow contestant when chatting with the lead is usually the kiss of death in this franchise, but we all know Clare does not follow the rules.

The final date of the episode is a one-on-one with Zach J.—who looks like he could be a Nashville country star—at the resort’s spa. While Zach J. gets pampered, Clare informs the camera that she wishes he were Dale. Seriously? Then comes what is arguably the most uncomfortable moment in the episode (in an episode made almost entirely of uncomfortable moments): Clare and Zach J. are hanging out in the pool, and as they climb out to go and change for dinner, Clare leans in for the kiss. I guess Zach J. wasn’t expecting this, because he doesn’t lean in, causing Clare to pull away thinking he’s rejecting her. Zach J. realizes he just inadvertently c*ckblocked himself, panics and grabs at her neck in a very aggressive and alarming way. Clare, visibly shaken, excuses herself and sends Chris Harrison as her substitute on the dinner date, where he delivers the news we all saw coming: bye bye, Zach J.! Now we’re left with only one Zac/h/k, Zac C., whose one standout moment in the episode was making a “Gossip Girl” reference, so congrats to him for being an unproblematic Zac/h/k.

The guys really killed the fashion game this week. I’m impressed by the effort they put into their appearances, because it’s entirely obvious that Clare isn’t going to spare them so much as a passing glance.

The fashion favorites: Demar’s black jacket and white mock neck; Clare’s crawler earrings; Eazy’s blue and white plaid blazer; Bennett looking like Clark Kent in his glasses; Chasen’s cream jacket and white button-down (this should be a faux-pas, but for some reason I love it? BRB, waiting for Chasen to sail me to his house on Martha’s Vineyard).

I don’t want to condemn Clare for allegedly “finding love.” She’s 39, has been screwed over by guys on national television multiple times and just wants to settle down with a man who is nice to her. We can’t blame her for that. What I do take issue with is how little attention she gives the other guys—I feel bad for them, sure, but I’m also just dying for content that isn’t Clare making googly eyes at Dale. It looks like I’m about to get my wish, because the episode concludes with a slow-motion shot of…wait for it…Tayshia (!!!) seductively emerging from the pool. So, ABC has officially confirmed that this bizarre season will be saved and that a new Bachelorette will come in mid-season, which, much like the coronavirus, is entirely unprecedented. I’m sorry, did someone say “the most dramatic season yet?”