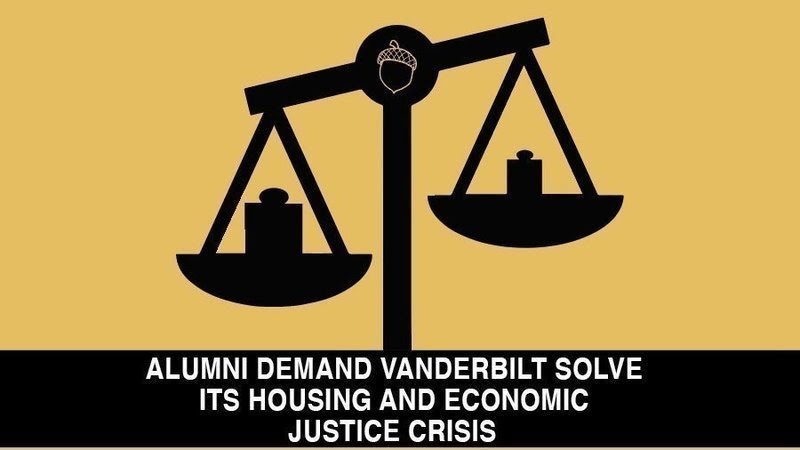 The Vanderbilt Alumni for Economic Justice coalition, a group of Vanderbilt alumni writers, researchers and publicists have assembled to petition the university to change its policy of charging students a daily fee for winter housing.

Vanderbilt’s announcement on interim housing during winter break stated that some students would be allowed to stay on campus during break and would be charged a daily fee of $54.90. An Oct. 8 message from Dean of Students Mark Bandas announced that housing would be available to various categories of students, including homeless students, student-athletes in competition, international students and Peabody students pursuing licensure beginning on Nov. 22.

Provost Susan Wente sent a community message on Oct. 10 to clarify that Vanderbilt will not charge homeless students and students with demonstrated financial need for university housing provided over winter break.

Students must apply to stay on campus. The application is open until Nov. 15, and students will be notified of their approval on a rolling basis, per the O’Hare Housing Portal.

Historically, students intending to stay on campus were allowed to occupy their rooms over Thanksgiving break, semester break and spring break after notifying the Office of Housing and Residential Experience and receiving approval from the Senior Director for Housing Operations.

The alumni group stated that they were motivated by student outrage on social media over Vanderbilt’s announcement.

“Our attention was first drawn upon witnessing waves of hysteria and embarrassment ravage the undergraduate student body,” the alumni group’s official statement said.

The petition expressed concerns for students who may not be able to source the funds to stay on campus and may have to return to unstable, abusive or toxic home environments. The petition included several personal, anonymous examples from Vanderbilt students affected by the university’s decision.

“Keeping the dormitories open and accessible to students who belong at Vanderbilt is not only a moral choice but a practical one as well,” the petition states. “Economic justice is not a question of money, it is a question of humanity.”

“I agree that the university should close the campus after the Thanksgiving holiday for public health and safety,” Issa said. “However, [the university] must provide strong, firm alternatives for those students who don’t have the option to return home.”

Issa touched on specific alternatives including providing students with housing, drafting isolation plans and supplying meals in dining halls or through meal money for students on campus. Burton added that as a recent alumna, she feels responsible for ensuring Vanderbilt students are taken care of.

“In my eyes, the movement is a collective expression from alumni asking Vanderbilt to step up to the circumstances of our time,” Burton said. “It’s essential the university shows its dollars going directly to support our community and each of its members.”

Shah said while no one has directly contacted him, the coalition has reached out to other members of the executive board. He said he and Vice President Shun Ahmed have been working with Bandas regarding the restrictions on students who are allowed to stay on campus.

“Our thought process is that if [students] need to stay, there is a legitimate reason why students would say that they need to stay,” Shah said. “No one is going [to say] ‘I want to stay through Thanksgiving, into finals and however else longer’ just because they want to stay. What we’ve been trying to present to administration is to give the students the benefit of the doubt.”

An Oct. 21 statement from the Vanderbilt administration reaffirmed that its choice to close housing was guided by public health factors and care for both students and staff.

“[Closing for Thanksgiving break] will allow us to reduce density on our campus in anticipation of a predicted surge in COVID-19 cases and ahead of the winter flu season, to mitigate from those in residential housing traveling to and from Nashville, and to allow time for facilities maintenance,” the statement said.

As students pay for housing by the designated housing period and not the year, students who are approved to remain on campus during winter break will pay a daily housing fee.

“Students who are homeless, or those approved to stay and have demonstrated financial need, will not be charged for winter break university housing,” the university’s statement reads.

Vanderbilt Campus Dining will also provide meals at no cost for students with demonstrated need who are approved to remain on campus during the break. Demonstrated need refers to students who demonstrate a lower expected family contribution (EFC) and qualify for need-based aid from Vanderbilt.

“We always support residential students with demonstrated financial need, and will provide support through our normal mechanisms,” the university’s statement reads.

In an Oct. 16 email to all students and alumni involved in the coalition, coalition leader and Class of 2020 alumni Minnie Mangafas wrote that she and Sara Starr met with an administrative representative from G.O.L.D. philanthropy.

The representative has not yet responded to a request for comment.

“We’re basically being stonewalled,” Mangafas said in a message to The Hustler. “He basically confirmed that the only way the admin would consider our demands is if there is enough widespread Vandy community support for what we want.

“They continue to ignore emails and outreach, and at large we’re very disappointed,” Starr said.

Mangafas cited one case where a current Vanderbilt student who had told Bandas about her situation as a homeless student received a short reply from him containing a PDF document of Tennessee’s laws for legally declaring oneself homeless.

“[We have] been emailing them for upwards of 10 days right now asking for clarity on what processes will be used to determine if students can stay on campus because students who are LGBTQIA+, abused, or not legally homeless will have additional hurdles to jump,” Mangafas said. “Students who fall into these categories and have reached out for guidance were repeatedly directed to the State of Tennessee’s legal code to figure it out on their own.”

“We always support residential students with demonstrated financial need, and will provide support through our normal mechanisms including, financial aid, waivers and hardship fund grants, to students approved to stay on campus who are homeless or otherwise have financial challenges or hardships. We are not decreasing and will not decrease support,” the statement reads.

Mangafas’ email asked coalition members to share the petition with current students and participate in a social media campaign, which began Oct. 16 at 1 p.m CDT. The coalition continues to ask current and past Vanderbilt students to sign the petition, in the hopes that the administration will consider their demands with greater community support.

“The admin won’t care if we don’t get signatures,” Mangafas wrote in the email.

“Historically, comparing this to my activism on campus, it was fairly common to have to really force an issue for the administration to even begin to pay attention, and from what I hear from current students it has only gotten worse with the new administration,” Starr said. “This response doesn’t shock me.”

Frustrated with the lack of response from Vanderbilt’s administration, the alumni coalition has determined that the next step in their campaign for justice was to turn to local news media. Mangafas’ Oct. 16 email to the coalition called for support in reaching out to local news organizations and contacting reporters.

“After being stonewalled while students are asking for direction from the admin on whether they should legally declare themselves homeless,” Manganas said, “We feel like we have no choice but to start speaking with outlets.”