The Oct. 23 email follows a steadily increasing on-campus positivity rate, with the week of Oct. 12-18 having the highest yet at 0.67 percent. 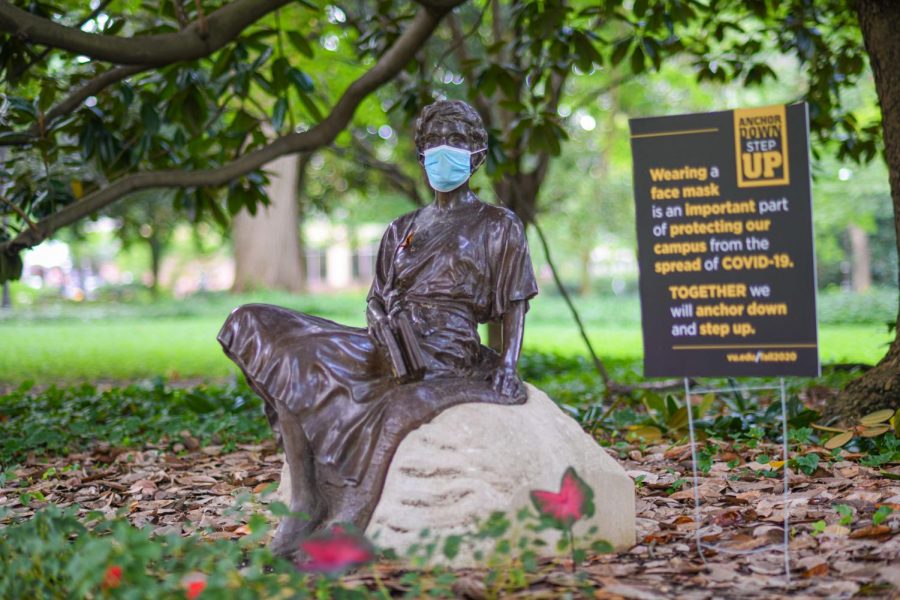 Masked statues are among many visual displays on campus that remind us to “Anchor Down, Step Up.” (Hustler Multimedia/Hunter Long)

LAST UPDATED: 8:50 p.m. CDT. This story has been updated to reflect that the university will use the Scarritt-Bennet Center in the case of an increase in positive cases. The university also confirmed the Holiday Inn will not house positive students.

Provost Susan Wente sent an email today around 3:00 p.m. CDT to students, urging them to continue abiding by campus protocol and stop engaging in “troubling patterns” of behavior, following an increase in both on and off-campus COVID-19 cases.

Wente stated that the Public Health Command Center, formed in partnership with the School of Nursing, identified some behaviors for students to stop engaging in and offered other suggestions to slow the virus’s spread. Some of the “troubling patterns” included eating at restaurants while fewer than six feet apart, visiting other college campuses, having protocol-violating gatherings and interacting with individuals from out of town.

“It is imperative that we address the current rise in our student positivity rate as we approach the final month of the fall semester,” the email reads.

Wente said that the Command Center still did not know of any transmissions caused by in-person classes.

As a result of the increase, Wente stated that satellite spaces will have to supplement existing apartment-style living for isolation at the Village at Vanderbilt.

Some possible options for Vanderbilt include properties such as the Vanderbilt-owned Holiday Inn on West End.

Vanderbilt has confirmed in a message to The Hustler that the university will not house positive students in the Holiday Inn.

“Students should be aware that, while we have ample isolation and quarantine space, as the numbers of positive cases increase, we will have to begin using different satellite spaces,” the email reads. “As opposed to the apartment style living currently being used for isolation and close contact quarantine, the off-campus facility has single rooms with a private bath.”

The university said that if the number of positive cases continues to increase, they will have to begin using satellite spaces including Scarritt-Bennet Center for isolation.

Wente iterated the importance of addressing the rise in cases as cases in Nashville also continue to increase; part of this response has also included enhanced testing protocol and the creation of programming that falls in line with university guidelines.

Other suggestions to help slow the spread included only dining where there is six feet or more of room at a table, limiting gatherings to ten people or fewer and always wearing masks and reducing non-essential trips, Wente added.

“We must stay strong to stay together,” Wente’s email concludes.

The Hustler will update this article as more information becomes available.