A tri-team athlete, Amir Abdur-Rahman recounts his rise in football

The junior wide receiver picked up football his sophomore year of high school after a long hiatus, and the Commodores are glad he chose the sport. 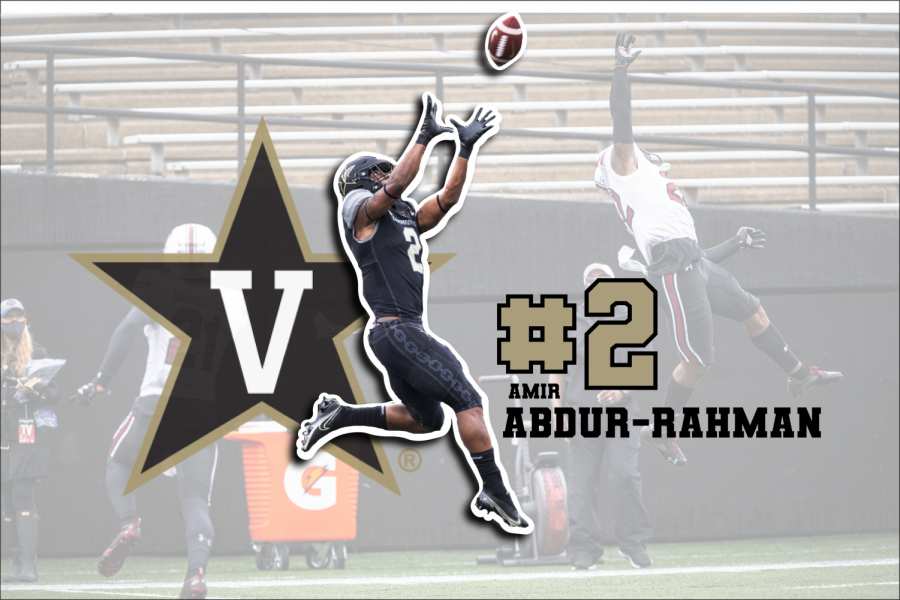 Earning a scholarship to play a sport at the Division-I level takes years of hard work and sport-specific skill development. Most student-athletes choose their sport at an early age with a singular goal of playing in college. For an SEC school as historic and well-rooted as Vanderbilt, the convention remains more so.

Junior wide receiver Amir Abdur-Rahman wasn’t satisfied with that well-worn path. He played football as a child but did not play again until his sophomore year of high school.

During his hiatus from football, Abdur-Rahman split his time between the pool and the track. He swam butterfly, freestyle and participated in relay teams on his high school swim team. His track resume is just as long: Abdur-Rahman threw the discus and shot put, did the triple jump and ran the 400-meter race and on 4×400 meter relay teams.

As he grew older, the question centered on which sport he would pursue. Coming off a long break from football, his rise up the Commodores’ depth chart begs the question: how did Abdur-Rahman rise from picking football back up as a high school sophomore to starting at an SEC school in only four years?

His athletic genes eased his transition back to football. Abdur-Rahman’s mother played basketball, track and softball through high school. His grandfather coached football, basketball and baseball after running track and swimming in his own high school athletics career. His great-grandfather set state records in multiple high school track events as well.

“I feel like I was destined to play any kind of sport, whether it be swimming, track, or football,” Abdur-Rahman told The Hustler. “I think I’m the first of my family to actually play collegiate football.”

Abdur-Rahman is making not only family history, but Vanderbilt history as well. He played in every game his freshman season, initially only on special teams. Special teams only makes it onto the field a few times a game, and Abdur-Rahman wanted to make a bigger impact on the team. Former Vanderbilt running back Khari Blasingame took Abdur-Rahman under his wing and gave him a perspective only an upperclassman could develop.

Blasingame advised the young receiver to invest in the game plan whether it had him playing on special teams or on the offense—making an impact on the team was what mattered most.

Abdur-Rahman made more than an impact, making national highlight reels and cementing his name into rivalry lore with an epic 26-yard touchdown catch in Vanderbilt’s 38-13 victory over Tennessee in 2018.

He made the most of his limited catches his first year on campus. Abdur-Rahman accrued a whopping 27.0 yards per reception across his four receptions.

Hoping to build off his freshman year campaign, Abdur-Rahman entered his sophomore season with high hopes. However, an undisclosed injury in the season opener against Georgia stopped him in his tracks and sidelined him for the rest of the season. This season-ending injury devastated him, but he learned to take it in stride.

”I took the injury and the off year and used that to build on myself,” Abdur-Rahman said. “Whether it was learning some more concepts in the game or studying the game more.”

A new coach meant a clean slate for every wide receiver on the roster. Abdur-Rahman took the idea of a fresh start to heart and changed his number from #87 to #2.

But another injury limited Abdur-Rahman through much of this season’s preseason camp.

“He hurt his hamstring,” head coach Derek Mason said. “One thing about a hamstring is that it’s not a one-week fix. That’s generally a four-to-six week deal. For him, it’s taken a while to really get back [from injury] and truly get back.”

Abdur-Rahman proved he was back with a career-high five receptions for 72 yards in the season opener at Texas A&M. As a starter and a veteran on the offense, he has been vocal in supporting both his true freshman quarterback and the young receivers.

Team chemistry, especially on the offense and between the quarterback and wide receivers, is crucial for laying groundwork for success. Abdur-Rahman has been intentional on brewing it with his fellow teammates. He understands its importance and has been working to strengthen the bond among teammates.

“Off the field, I’m bringing guys in with me as far as going to new restaurants and places to eat, and to see each other and learn the history between one another,” Abdur-Rahman said. “I feel like that’s a good way to lead off the field.”

From freshman year of high school to freshman year of college and beyond, Amir Abdur-Rahman journeyed from the literal sense of “fresh” to putting up SportsCenter Top 10-worthy plays and priming himself for individual and team success.

He isn’t done yet.

“I’ve got more in the tank for you all,” Abdur-Rahman said. “It’s definitely gonna be a great finish here.”