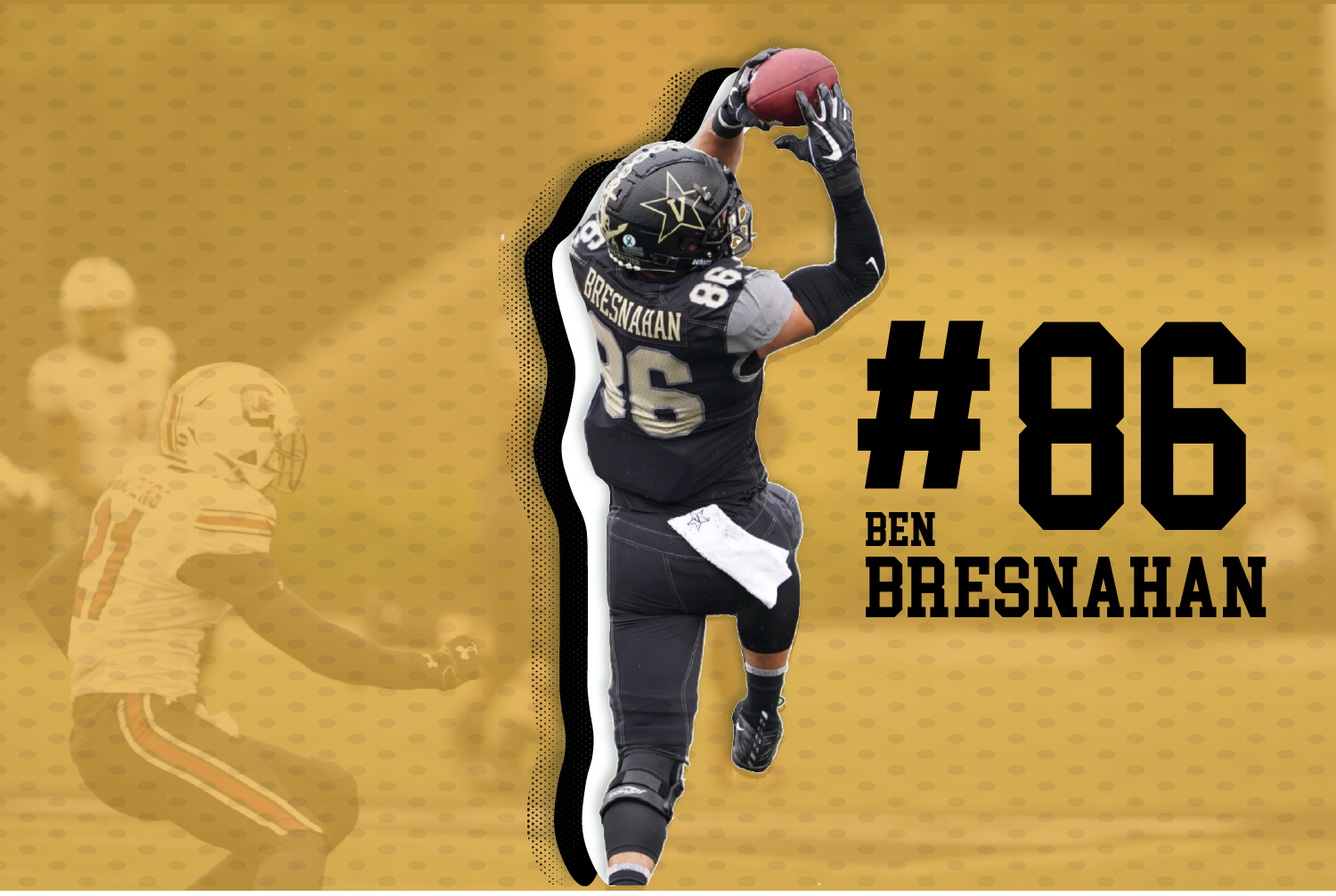 From football to baseball, Ben Bresnahan is rooted in his commitment to Vanderbilt

By the time Ben Bresnahan had fallen in love with football, he had already decided on attending Vanderbilt—from his baseball days, of course.

But growing up, Ben Bresnahan was more than just a football player. Sure, he always seemed destined to be a special athlete. It was almost a matter of when—not if—his athletic career would take him to new heights. In fact, his father, Brian, never thought to ask a new question until he saw something, heading home from work one night, that changed “when” to “what.”

Beneath the mud, he saw a recognizable frame. It was his son, Ben, a baseball player by trade, playing football with the others. That’s when a new question had dawned. It was no longer a matter of when his son would make it to the next level. Instead, it was which sport would take him there.

“When I asked him the question, right before his freshman year of high school, his answer was simple,” Brian says. “He told me, ‘Hands down, a touchdown. I just love scoring a touchdown; it’s even more exhilarating than hitting a walk-off homerun.’”

Years later, not much has changed. Ben, now a junior tight end at Vanderbilt, scored his first collegiate touchdown in Week Two against LSU. Judging by his reaction, the feeling seems as exciting as it was when his father first asked the question.

“I mean—I was—yeah, I just can’t,” Bresnahan says over the phone, overcome with joy as recollects the play. “I just can’t stop smiling. It still gives me chills just thinking about it.” 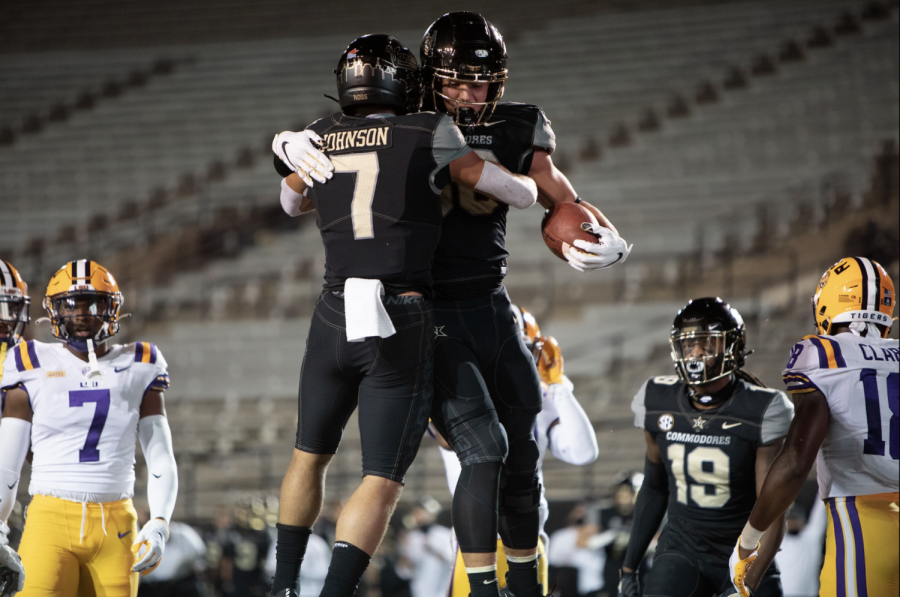 In the end, Bresnahan seems to have chosen the right sport. And thanks to his past life as a baseball player, he was led to the right school.

For many years, Bresnahan was headed down “a baseball path,” his father says. That started when he was just eight years old: he entered a home run derby at the local Sawnee Mountain Park and proceeded to beat 12- and 13-year-olds with ease.

He was a talented ballplayer: a left-handed batter, a right-handed pitcher and an outfielder. His parents expected him to play baseball—and they weren’t alone.

“I coached Ben in baseball,” Brian says. “And one game, I was coaching against a fellow dad whose son was an elite athlete. I asked him, ‘Am I too involved in Ben’s baseball trajectory?’ He responded quite frankly. He said to me, ‘Listen, if Ben was my son, I would be more involved with his development. Because you don’t know what you have on your hands.’”

Still, Brian wanted to give his son freedom. Whether it was a question of what sport or a question of where he’d play, he encouraged Ben to forge his own path. And at the time, Ben wanted his path to go through Vanderbilt—Vanderbilt baseball, specifically.

Growing up in Georgia, he was in the heart of SEC country. In the summer of 2014, as Bresnahan prepared to start his high school playing career, he watched the VandyBoys win their first National Championship, prompting him to ask his dad if he could attend Vanderbilt baseball’s summer camp.

“I was playing baseball in Marietta, down in Atlanta, kind of where Dansby Swanson was from,” Bresnahan says. “And I was always a big fan of him. I kind of realized, ‘Alright, Vanderbilt is obviously great academic-wise, and the baseball is next-level,’ so it became a spot I wanted to check out.”

Bresnahan joined some of his high school baseball teammates at Tim Corbin’s summer camp. He stayed in a Branscomb dorm room, the same building in which he ended up living as a sophomore in college. While on campus, Bresnahan fell in love with Vanderbilt.

Better yet, while on campus, Bresnahan learned lessons from Corbin that catalyzed his football career.

“It was Corbin’s life lessons that really stuck with Ben. Coach Corbin really taught him not only some baseball skills, but the importance of sacrifice and being selfish with your time and devoting your time to your craft,” Brian said. “That really stuck with Ben. The lessons like: working with other athletes instead of going to spring break; attending camps for baseball, not the beach; hitting the weight room versus the video games.” 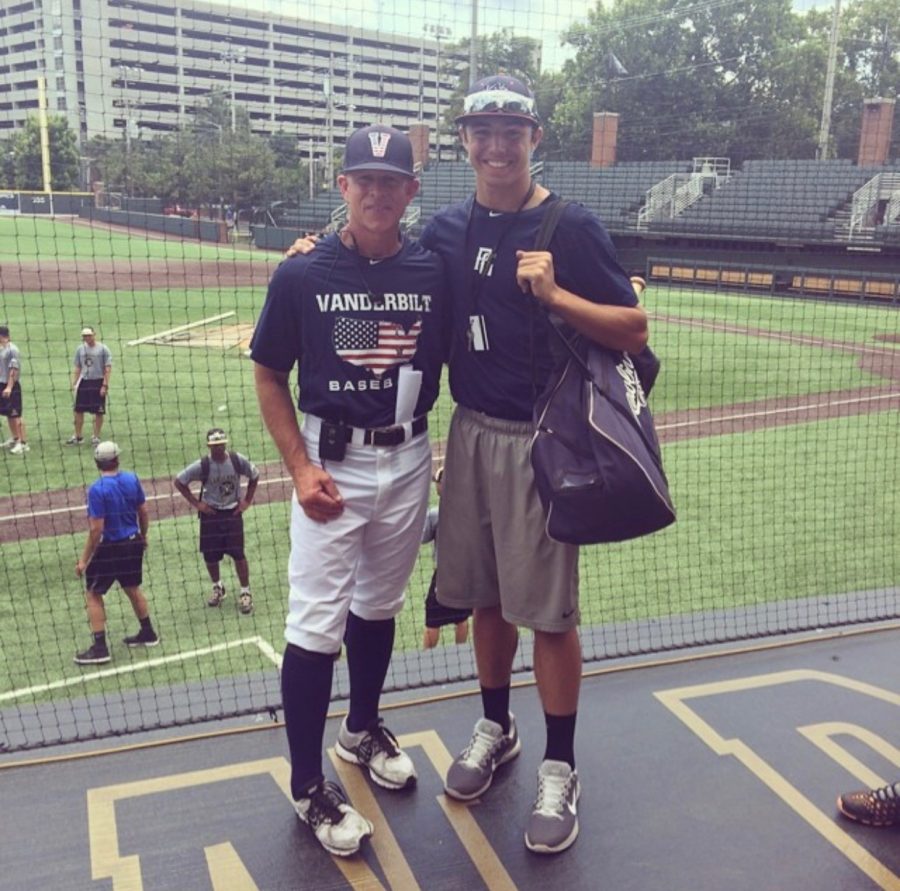 Months after the camp, when Ben broke the news to his father that he prefers scoring touchdowns to hitting home runs, he applied Corbin’s lessons to his football career. He worked on perfecting his craft. He wanted to make sure he was selfish, “but not the kind of selfish that makes people not like you,” Ben clarifies. “Selfish by looking out for yourself and pursuing the best opportunities to help both your own growth and your team’s growth, just like Corbin told me.”

To this day, Brian credits Corbin for helping his son get to Vanderbilt; for helping his son develop a work ethic that’s second-to-none. In fact, after seeing Corbin and the Vanderbilt baseball team at a tailgate prior to a 2019 football game, Brian went out of his way to thank the VandyBoys’ skipper.

“I stopped by and chatted with Coach Corbin for five or ten minutes,” Brian says. “And he remembered Ben. He remembered me, and I thanked him. I said, ‘I just want you to know that Ben is here—at Vanderbilt, playing football—because of the impact you had on him and on his life. He just switched gears to football. I just want you to know, Coach Corbin, that we’re here at Vanderbilt because of you.’ And he really firmly shook my hand and said, ‘Thank you so much. We’re so glad that he’s here.’”

Bresnahan was selfish with his time—in a good way, of course—allowing him to elevate his game and his body to new levels. On the field, though, it’s quite the opposite. He is as selfless as it gets.

One high school moment stuck out to his father as a highlight of Ben’s on-field persona, when his quarterback under-threw him in the red zone. The ball was picked off, and the defensive back had “at least a 35-yard head start, if not more,” on a play that was “obviously going to be a pick-six,” according to his father.

Being a team player might mean chasing down an opponent that intercepted the ball. It might mean splitting out wide and catching a pass. Or, according to Bresnahan, it might mean blocking, something he worked on all throughout high school.

“In high school, I was mostly receiving the ball, but I knew in college I wasn’t going to be fast enough to line up out wide and run go patterns all the time,” Bresnahan says. “I knew I needed to work on the blocking aspect, so I worked with a former NFL player, Will Anderson. That was the first stepping stone for me.” 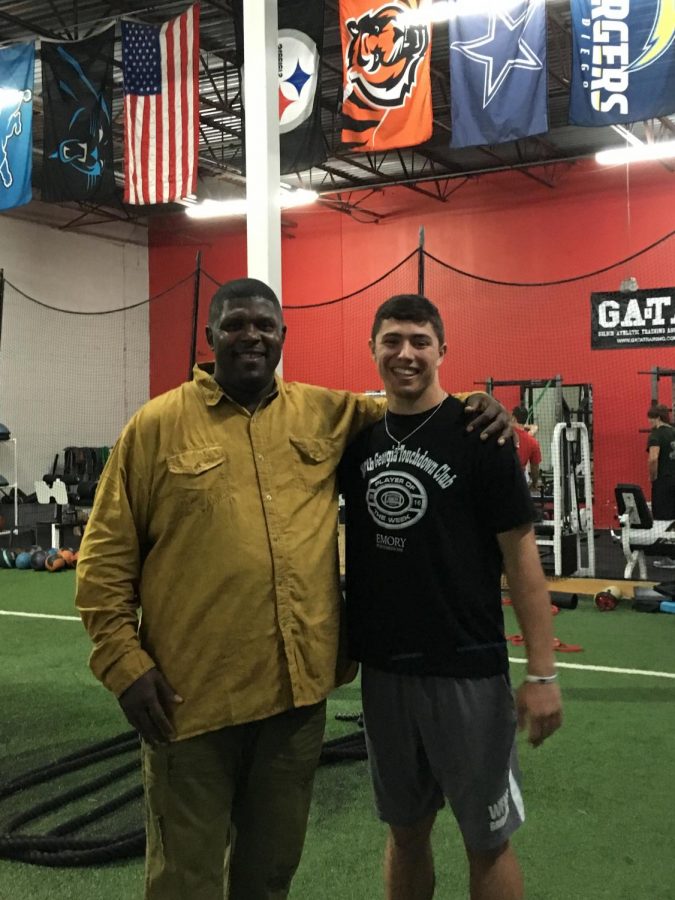 The first step, as he noted, was refining his skillset. The second step? Selecting a school at which he would play his next four years. A daunting task, sure, especially for Bresnahan, who blossomed into a three-star tight end. Offers just kept coming in—pouring in—at a rapid pace: Kentucky, Minnesota, Mississippi State, Ole Miss, Tennessee, Tulane, UCF and Wake Forest, to name a few of many. Even the Navy came calling, which, according to Brian, was one of the proudest moments as a father.

“Ben had already committed when he got the call, but he put the phone on speaker. The guy said, ‘Ben, obviously we like your size and your football talent, but it’s your character, your solid grades and your leadership—that’s why we want to give you an opportunity to play football for the United States of America in the US Navy.”

By then, though, one school had already stolen Ben’s heart—he was set on going to the same university that stood out a few years prior, when he was certain he’d end up a baseball player.

“At the end of the day, there’s a combination of reasons that made me pick Vanderbilt,” Bresnahan says. “The same combination that made me interested in the baseball program. I know everybody says it’s in the SEC and I know everybody says it’s a great degree, but both of those are true. And they’re huge parts of the decision. But there’s one other thing that makes it different: the people. At so many other schools, and I don’t need to say specific ones, but they’ll act one way whenever you’re on a visit. And then it’ll be like, once you get there, a completely different situation. I knew the people at Vanderbilt were being real with me.”

As it turns out, once he selected Vanderbilt, the people were no different than they appeared on his visits. That extended far past the coaching staff—the players, his teammates, were equally as dedicated to helping him improve. NFL talents like Jared Pinkney and Kyle Shurmur mentored him upon his arrival, which was the third step in his development: preparing to play football in the SEC.

“Coming in, I knew that there was a lot of talent on offense,” Bresnahan says. “A lot of guys with a lot of experience playing SEC ball. But that was actually what made me ready to go when the time was right. Being able to roll with Shurmur, he taught me so much about what you need to do to succeed at this level. And same with Pinkney, who showed me how to succeed at this position, specifically.”

Bresnahan, now a junior, hopes to spend his final years on West End paying it forward.

“That’s a big piece,” Bresnahan says, referring to his role as a leader. “I try to lead and mentor my teammates however I can. I want to help our tight ends and help our teammates the same way they helped me.”

“At the end of the day, that’s where I got my love for football,” he continues. “I loved baseball, but in football, being a part of the whole team aspect, playing for something more than yourself, that’s huge for me.”