As the Tampa Bay Rays prepare to face the Los Angeles Dodgers in the World Series, The Hustler staff makes their picks. 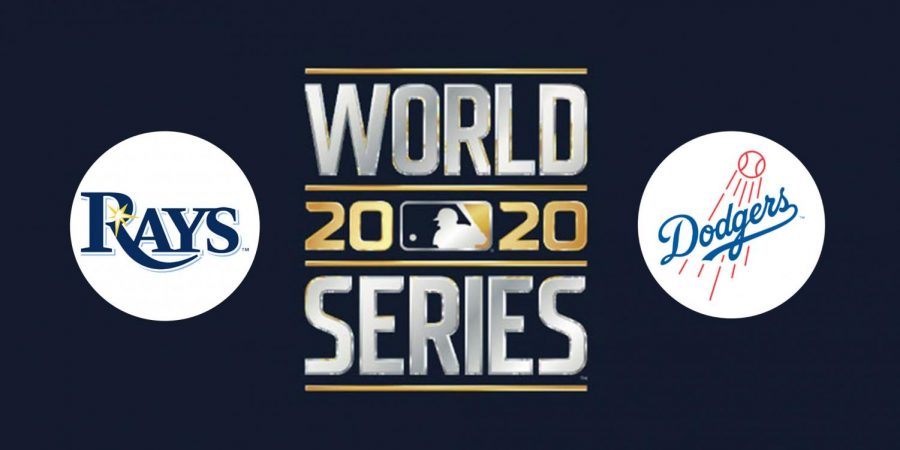 The Tampa Bay Rays will face the Los Angeles Dodgers in the 2020 World Series. (CBS Sports)

As the 2020 MLB season will come to a close in late October, as the Los Angeles Dodgers will face the Tampa Bay Rays in the World Series. Before the series begins, The Hustler sports staff makes its picks: who will be named the champion?

I really, really want the Rays to win. I would like nothing more than to see Ji-Man Choi, Randy Arozarena and the rest of my new favorite baseball team beat the Dodgers. I just don’t see how it can happen. I don’t see the Rays $23 million payroll beating the Dodgers $100-plus million payroll because at the end of the day, there’s a reason for that discrepancy: the Dodgers have star power that no MLB team can match. And that kind of star power will find a way to rise to the top. I can’t say I’ll be mad, per se, if the Dodgers win. As a Mets fan, I’m grateful that the other team, the NL East-winning Braves, were eliminated. It would also be cool to see Vanderbilt alumnus Walker Buehler get a ring. Honestly, I wouldn’t really mind either outcome. This is a good World Series matchup for a Mets fan. It’s hard for me to get too disappointed—that is, unless former Met Justin Turner has a great series.

The playoffs couldn’t have gone better so far for Rays fans such as myself with the team knocking off the rival Yankees in poetic, dramatic fashion before avenging last season’s playoff loss to the Astros. But they aren’t done yet. My hometown of Tampa hasn’t even finished celebrating our Stanley Cup championship (nothing beats a championship boat parade), but a week from now it will be double the celebration when the Rays win their first World Series ever.

This series will be painted as a David and Goliath matchup, and maybe it is in term’s of payroll, but it’s not when you compare the team’s play on the field. The Rays are just flat out good. They make their living on pitching, defense and timely hits and they’ve shown that they can win like that in the postseason too. It also doesn’t hurt that Randy Arozarena has basically morphed into prime Mike Trout during these playoffs. The Dodgers are huge favorites and they definitely have more star power and bigger bats, but the Rays have consistently just found ways to win all season no matter the circumstances. There’s no reason for me to think that will change now. It will be ugly and stressful at times, but Tampa will pull it out in the end on the backs of their stable of bullpen guys. In the words of Derek Mason, “Let’s Ride”. Rays in Seven.

I really wanted to pick my Astros three out of my four years on staff, but I guess the Rays will have to do this year. I saw plenty of the Rays’ pitching during the ALCS, and it’s just as good as advertised. Where I think the Rays win this series, though, is with their bats. Randy Arozarena is fun to watch if you’re not a fan of the team playing him, and he can hit any pitch out of the park. Manuel Margot is insanely talented as well and can punish pitchers. Don’t count out the big guy catcher Mike Zunino who can crush 400-foot homers if needed.

This is going to be a long – but extremely entertaining – series. From top to bottom both rosters feature talented hitters and deep pitching staffs that have helped carry them through the playoffs. And although I think the Rays feature arguably the best first three starters (Snell, Glasnow, and Morton) in all of baseball, in a long series, hitting wins out. Corey Seager is coming off one of the greatest NLCS performances in history. Mookie Betts knows what it takes to win a World Series. And reigning MVP Cody Bellinger is sure to heat up in pursuit of his first ring. Dodgers in 7.

I hate the Houston Astros. If you have not been living under a rock, you will know that the Asterisks cheated their way to a World Series win. While that made me dislike them, my full blown hatred for them emerged after they beat my hapless Minnesota Twins this year. I am now an official and proud Houston Astros hater. Burdened with this new hatred, I now have an ethical obligation to support the team that ensured that the Houston Trash Cans would not win the WS again. So, Rays in 7, at the expense of Clayton Kershaw and VandyBoy Walker Buehler.

Hard to bet against a team who just came back from 3-1 down in favor of a team who almost blew a 3-1 lead. I think it’ll be a close one but ultimately Dodgers will pull the series out in a 7 game thriller. I predicted Lakers 4-2, so here goes nothing to go 2/2.

As a longtime Braves fan in mourning, I have chosen to support the Rays, mostly because I now despise the L.A. Dodgers. While I will admit the Dodgers have good depth in their lineups, they perform sporadically and inconsistently. The Atlanta Braves, who may not have as significant depth, showed that their lineup (including my personal favorite Dansby Swanson) was able to perform with certain strength in both the regular and post seasons. Freddie Freeman showed himself early on as an especially high performer, both at the plate and as a first baseman. His work was accompanied by Swanson’s play at Shortstop, Ronald Acuña Jr. in the field and at bat, and other strong hitters like Marcell Ozuna. Pitching by Ian Anderson, A.J. Minter, and many others showed the Braves also control the mound which led to multiple strikeouts and a lead in Game 7. All of this combined allowed the Braves to be defensively aggressive and wreak havoc at the plate. Hot take – The L.A. Dodgers would be nothing without Mookie Betts, Cody Bellinger, and Corey Seager. The Braves blew a 3-1 lead and I will not ever deny that, but they were the team that deserved to face the Rays. I thoroughly hope that the Tampa Bay Rays kick em right back to L.A., and that my Deputy Sports Editor Alyssa will not suffer through this week like I did last week.

Much to the chagrin of fellow staff writer Alex Venero, my West coast heritage (and loyalty) trumps the ties of our friendship, and I will be rooting for the Dodgers during this World Series. My heart will always belong to my hometown San Francisco Giants, but the Dodgers will ultimately be able to defeat the Tampa Bay Rays thanks to the depth of their lineup.

After a close NLCS, the Dodgers superior lineup and rested pitching staff will take care of the Rays in five games. The Rays have been one of the best stories in baseball but simply do not have the offensive firepower to keep up with a loaded Dodgers offense. Factor in pitching depth behind Kershaw which the Dodgers have not had in previous runs and LA certainly looks like too much for Tampa Bay to handle. After years of disappointment in LA, the Dodgers will break through and win their first World Series since 1988.

Am I a salty Braves fan who wants nothing good to ever happen to the Los Angeles Dodgers after their comeback win in the NLCS? Let’s just say: Yes, I am. However, if I put my pettiness to the side for a moment, it’s hard to believe that the Dodgers won’t get over the hump this year and finally win another World Series. The Dodgers’ lineup is arguably the best in baseball, as opposing pitchers have had a world of trouble trying to put out the likes of Mookie Betts and Cody Bellinger. Moreover, former VandyBoy Walker Buehler and Clayton Kershaw are two of the premier pitchers in the game.

Tampa Bay has had a magical season, as manager Kevin Cash turned one of the lowest payroll rosters in the MLB into a legitimate contender. Unfortunately for the Rays, they just might not have the talent to keep up with the Dodgers. I think the Rays can win a couple of games, but the Los Angeles Dodgers will ultimately emerge victorious to win their first World Series since 1988.

Pitching wins championships. And the Tampa Bay Rays formidable rotation features three of baseball’s premier hurlers in Blake Snell, Tyler Glasnow, and Charlie Morton to go along with their lights-out bullpen. Morton is coming off an impeccable Game 7 outing against the Houston Astros where he gave up just two hits over 5 ⅔ innings. Fireballer Tyler Glasnow, working on an extra day of rest, is slated to take the mound for Game 1 where he’ll duel against the recently-injured Clayton Kershaw. The Dodgers will need to jump on the Rays’ starters early and often in order to put their foot down throughout the series, as the Tampa bullpen consists of a deadly combination of flame-throwing talent that has the ability to end games after the 6th inning. Nick Anderson, a 6’ 6” right-hander, registered a 0.55 ERA during the regular season and was one of the most dominant relievers in baseball against both righties and lefties. Diego Castillo and José Alverado, two products of the pitching-loaded Tampa Bay farm system, both flash triple-digit fastballs. Alverado, in particular, boasts a renowned sinker that will undoubtedly give left-handed power bats like Cody Bellinger and Corey Seager fits. Beyond pitching, the Rays also have the ultimate ace up their sleeve: MLB’s #1 prospect Wander Franco. This World Series will be a back-and-forth battle between one of baseball’s most storied franchises and one of its up-and-coming clubs, with the new kids on the block taking home the hardware in seven.