Presidential candidates aren't the only ones on the ballot this November. 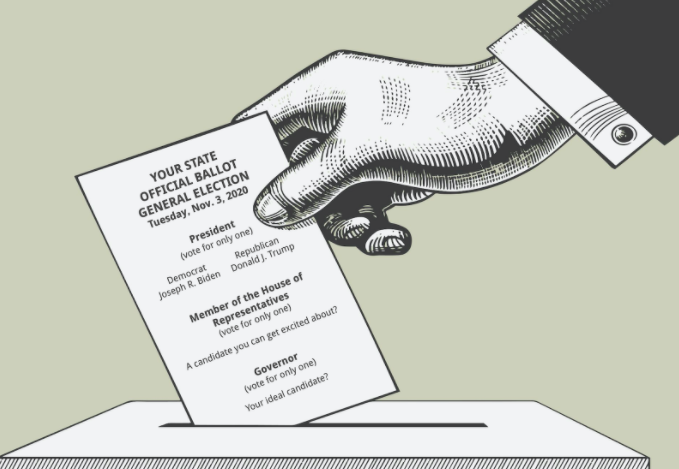 Show up on Nov. 3 not for the presidential ticket, but for the candidates further down the ballot. (Hustler Staff/Nora Fellas)

For those on the left of the political spectrum, many of the candidates for the Democratic nomination were exciting: Bernie Sanders promised universal healthcare; Elizabeth Warren promised a progressive wealth tax; Julian Castro promised universal pre-K. But out of the most diverse fields of candidates in history, Joe Biden, a moderate, elderly white man with a mixed record, is the only remaining choice for president on the Democratic side. Many on the left are disappointed by this, which has led some left-wing voters—young voters in particular—to want to sit this election out.

I’m not here to vote-shame anyone. That just breeds resentment, which is counter-productive. Rather, I want to urge those who genuinely find themselves unable to hold their noses and vote for Biden, despite his shortcomings and the alternative, to still show up on Nov. 3 not for the presidential ticket, but for the candidates further down the ballot.
Your vote for candidates down the ballot counts even if you don’t vote for a presidential candidate, because an incomplete ballot is still valid.
If you liked Bernie Sanders, for example, consider how he got his start: he was elected mayor of Burlington, VT, in 1981, then went on to the House of Representatives and Senate, and then turned his focus to the presidency. Similarly, Joe Biden’s political career began with his role as a councilman in a tiny county in Delaware.

We all want to see candidates we can be excited about on the ballot for president, but it is seldom that anyone can be a serious candidate for president without having spent years in politics before making their run. Donald Trump is the only exception to this in several generations. In the light of this reality, we should acknowledge the role we can play in promoting younger and less-experienced politicians now by voting them into positions down the ballot.

This is not to suggest that filling local offices with different people will result in fundamental social change, because voting can only go so far, but it is to acknowledge that it is often our local politicians who have the most influence over the issues that affect our communities. It was likely your mayor or governor who decided whether or not mask-wearing was mandatory in your town or state, your district attorney and attorney general who decide whether or not to prosecute police brutality, your state judges who decide who goes to prison and who is free and your city council members who decide how to allocate funding.

Unfortunately, local election turnout is low—only 27 percent of the eligible voters participate in a typical local election compared with 56 percent turnout in the 2016 presidential election. Low-turnout elections tend to hurt marginalized communities as turnout is typically much higher among affluent, older white voters.

It’s true that deciding which local politicians to support takes more work than turning on CNN and watching hours of presidential election coverage. But if you’re not sure whom to support, check if your preferred presidential candidate or other politician has endorsed anyone for your congressional or mayoral election. Additionally, if you want to support a third party while still getting your candidate through, check if the Working Families Party or similar body has endorsed a candidate on your ballot.

And do your own research because in 15 years, your mayor or district attorney or council-member could be running for president; and right now, you can have a hand in shaping their trajectory.