Public health remains at the top of Belmont’s priorities as the university prepares for the final presidential debate. 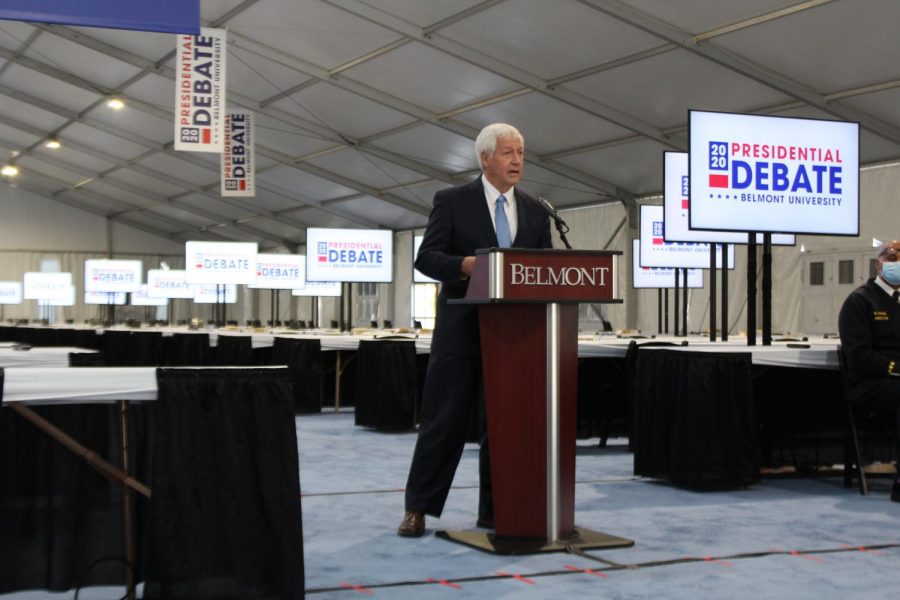 The debate will be held in Belmont’s Curb Event Center and will be broadcast at 8:00 p.m. CDT. Belmont previously hosted a presidential debate in 2008 between late Senator John McCain and former President Barack Obama.

Fisher said he is confident in Belmont’s ability to host such a high caliber event and stressed the significance of the opportunity.

“Belmont will once again shine a light on our great state, putting the eyes of the world on Tennessee just 11 days before Americans cast their vote for the president of the United States,” Fisher stated.

Cooper spoke to Nashville’s unique capability to host an event of this scale and its importance to the community.

“It is important that the nation get this important thing done before the election,” Cooper said. “Nashville was able to host this event because of our COVID-19 progress, and we have a reputation for safety that we had built and we are maintaining.”

“The number of cases in Nashville has increased over the past few weeks. I have kept this in mind when considering protection measures for the debate,” Caldwell said. “We all feel confident that the protocols that are in place leading up to and after this historic event will ensure that participants will be safe on this site. This includes health checks, temperature checks, requirements to wear surgical grade mass and spacing to allow social distance.”

Fisher also emphasized the strict protocols that will be in place to ensure the safety of students and debate participants.

“This [media tent] and that arena over there [Curb Event Center] will probably be the safest, healthiest place in America that night,” Fisher said. “I’ve got to have two tests in sequence before I get in—everybody does. It’s going to be a very controlled and safe environment.”

In further preparation for the debates, Metro Nashville Police (MNPD) announced that certain roads surrounding Belmont’s campus will be closed beginning at 12:00 p.m. CDT Wednesday, Oct. 21. All roads will be reopened by morning rush hour Oct. 23, per MNPD.

Belmont’s campus will also adjust to accommodate the debate. Belmont classes will all be held online and there will be no academic or extracurricular activities on campus Oct. 21 and Oct. 22, per an Oct. 14 email Belmont’s Vice President of Marketing and Communications John Carney sent to students. Some first-year students living in dorms near high-traffic debate areas will also be temporarily relocated to the Gaylord Opryland Center from Oct. 21 to 22.

The students in question will be required to take Belmont-provided transportation to the hotel where they will be staying with their roommates from campus. Social distancing will be enforced and masks are required for all students during their stay, per Belmont first-year Claire Jonas.

“I think that they went above and beyond to give us a really good experience, despite it being a bit of an inconvenience to their students,” Jonas said. “They did a good job ensuring that our professors are accommodating by switching some classes to asynchronous online learning during this time.”

Despite the challenges, Belmont views hosting the debate as its responsibility as an institution of higher education, Fisher said.

“It represents our university’s commitment to providing a place for civil discourse, giving American citizens an opportunity to learn about the candidates, to make those comparisons and to make your choices,” Fisher said. “This debate represents the last opportunity for the country to see the two candidates side-by-side before they go to the polls.”

Students on campus also recognize the magnitude of the historic event, according to Molly Deakins, co-chair of Belmont’s Presidential Debate Student Engagement Committee.

“I think it’s just a surreal experience,” Keidron Turner, the committee’s other co-chair, said. “Every day waking up to see that just reminds you of how global and big of an event that’s coming to Belmont, and we’re just thankful to be a part of it and have it on our campus.”