The Hustler talks to Vanderbilt’s newest “Forbes 30 Under 30” 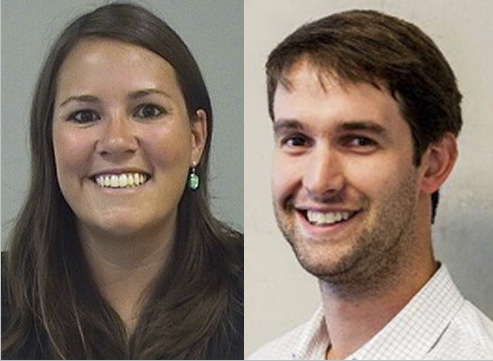 Three Vanderbilt alumni were recently named to the 2016 Forbes 30 Under 30 list, which honors young entrepreneurs who are at the forefront of their fields. Emily Motayed is a cofounder of Havenly, an online interior design platform. Caroline Guenther manages $2 billion worth of product families as Integrated Business Planning Manager for Cisco Systems. Andrew Barge, Content Development Manager for Twitter, has been instrumental in securing sports content such as the the National Football League’s Thursday Night Football for livestreaming.

The Hustler talked with Guenther and Barge about their experiences at Vanderbilt, their fields and their careers.

Caroline Guenther got her Master of Business Administration at the Vanderbilt Owen Graduate School of Management, but lived around the globe, including Scotland, Syria, China and Hong Kong before calling Nashville home.

Guenther started learning Chinese at age 15 and studied abroad in Beijing, China during her junior year of high school. This full immersion experience had a profound impact on Guenther’s life.

“Living in a city like Beijing, living with a family that doesn’t speak English, and kind of having to figure things out for yourself at a young age definitely helped make me who I am today,” Guenther said. “It’s really influenced everything I’ve done in my life.”

After this study abroad experience, Guenther knew that she wanted an international college experience. She attended the University of St. Andrews in Scotland where she majored in International Relations and Arabic. During her undergraduate career, Guenther studied in Damascus, Syria for a semester. She also started a study abroad program between the University of St. Andrews and Hong Kong University, where she studied for a semester during her junior year.

Guenther originally thought that she wanted to be a diplomat or spy. However, she decided to shift her focus to business after completing an internship at the U.S. Department of State and discovering that she disliked working in bureaucracy.

Guenther got a job at the New York Stock Exchange after graduating from St. Andrews. After working in finance for three years, she decided to get her MBA, and Vanderbilt’s Owen School of Management stood out because of its small class sizes and tight-knit community.

“When I came down and came to visit weekend, I just got a great sense of the students there,” Guenther said. “Everyone seemed very happy, and it seemed very collaborative.”

Guenther attributes her great experience at Owen to several factors. First, she enjoyed the community at Owen and is still close friends today with many people from her class. Second, Guenther enjoyed the curriculum that Owen offered. She took a negotiations class from Associate Professor of Management Tim Vogus, and she says that she will use the skills that she learned from that class for the rest of her life.

Nashville was also a large part of Guenther’s graduate school experience. Chuy’s was her favorite – Guenther and a friend even dressed up as the restaurant for a Halloween party one year.

“We had antennas coming out of our heads with the Chuy’s sign and we carried around a tray of nachos and creamy jalapeno sauce,” Guenther said.

“There’s so many great, different areas that have different feels around Nashville,” Guenther said. “It’s such a convenient city.”

While at Owen, Guenther completed internships at a private equity firm in Beijing and on Nike’s corporate strategy team in Shanghai. These internships helped her to choose a more specific career path.

“I really liked the corporate culture at Nike. It was really fast-paced and energetic and there were a lot of young people working there,” Guenther said.

Guenther realized that she enjoys the corporate culture, and working at several start-ups narrowed her focus to the technology industry. She interviewed with Cisco through an MBA interview day called “Day in the Bay” and moved to San Francisco after graduation.

Guenther enjoys the people that she works with at Cisco, which she says has a family atmosphere. The company also offers Guenther a large degree of flexibility, allowing her to work from home several days a week and visit family in Boston over the summer.

“I think it works because it’s such a great global company,” Guenther said. “A lot of what we do is over video-conferencing and WebEx, and actually my manager is in Guadalajara, Mexico and a lot of our team’s in Mexico.”

As an integrated business planning manager at Cisco, Guenther works within the product supply chain. She manages eight different product families of routers and makes forecasts as to how much of each product the company should manufacture. Guenther enjoys that her role is very central within the company.

“I’m working with the marketing department, the finance department and other supply chain groups to gather information and do analysis to decide then what forecasts to make,” Guenther said.

Guenther also values the human interaction element of her job — working with a variety of individuals to gather intelligence. Guenther credits these coworkers with helping her to get to this point in her career, as well as her family, friends and former classmates at Owen.

Guenther encourages young women who want to go into business to speak up and engage themselves in the classroom.

“Don’t be afraid to ask for what you want because you’re not gonna just be handed things, and you’re gonna have to ask for them.” Guenther said. “Get engaged in the classroom discussions because that’s where you build the confidence that you can then translate to the workplace.”

“I think sports is the ultimate unifier for mankind,” Andrew Barge said. “I think everyone’s a sports fan, and it helps break down barriers and helps bring people together.”

As a longtime sports fans himself, Barge knew from a young age that he wanted to work in sports. But it wasn’t until he began learning about the history of sports and writing about sports in college that Barge realized how valuable they are, specifically in the consumer landscape.

“Once I realized that sports was both a really pure and genuine unifier for mankind but also a really, really intriguing business that had a very clear differentiation from everything else, it seemed like the perfect place to try and create a career,” Barge said.

Barge grew up in Nashville, where he attended the University School of Nashville and lived fifteen minutes away from Vanderbilt University.

“I didn’t necessarily want to stay in Nashville,” Barge said. “I looked at a lot of places, but I realized that the perfect school for me was just down the road.”

As an aspiring sportswriter, Barge was drawn to Vanderbilt because it gave him the opportunity to cover SEC sports at a smaller school. As a sports writer for the Vanderbilt Hustler, Barge enjoyed traveling with the basketball team to NCAA Tournament games and interviewing former head football coach Bobby Johnson and former head basketball coach Kevin Stallings on a weekly basis.

After graduating with a degree in history from Vanderbilt, Barge moved to New York City to work for ESPN. He worked on the team that started the 30 for 30 documentary film series.

“ESPN always took sports seriously but it never took itself too seriously,” Barge said. “So as a first time marketer and a die-hard sports fan myself, that was a really, really fun mantra to buy into.”

After living in New York for five years, Barge moved to San Francisco to work for Twitter. He describes this cross-country move as the best decision that he’s ever made.

At Twitter, Barge works with brands like Fox Sports and Bleacher Report to ensure that Twitter is being fully leveraged as a media platform. He was part of the team that brought livestreaming of National Football League’s Thursday Night Football to Twitter. Barge says it is rewarding to democratize users’ voices and unlock the power of Twitter.

“Twitter plays an invaluable role in humanizing these brands and making them more approachable and more meaningful for fans, so that’s what I take the most amount of pride in,” Barge said.

Barge predicts that sports will become more accessible to consumers as sports coverage continues to shift from television to digital distribution.

“Technology is going to enable easier access and more efficient access to events that people care about,” Barge said. “I think if you’re an American basketball fan in China, or a German football fan living in America, it’s going to be easier and easier to watch your team at a moment’s notice.”

A true sports fan, Barge continues to cheer on the Commodores. He predicts that the men’s basketball team will make it the the National Invitation Tournament this year, but has higher hopes for the Vanderbilt baseball team.

“We’ll be back in Omaha (for the College World Series), and I fully plan on attending it,” Barge said.