@Kenziritotheburrito has attracted thousands of views for the themed outfits she wears to her COVID testing, vlogging her experiences weekly 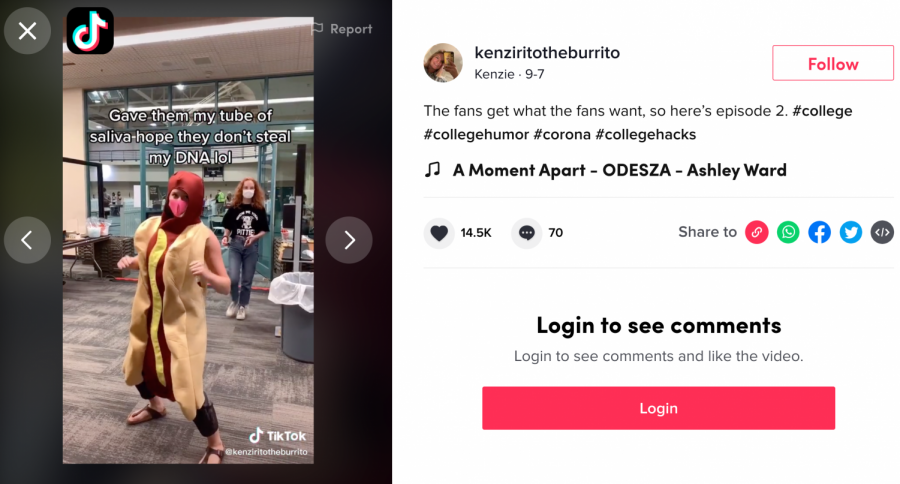 TikTok: i.e. the lawless land of skilled artists, dancers and viral-video-makers. Vanderbilt senior Kenzie MacDonald has more than joined that clique, having attracted about 37,200 followers on her TikTok, @kenziritotheburrito, since she first began posting singing videos in July last year. Recently, MacDonald made her account even more relatable and relevant by posting vlogs about the themed outfits she wears to her required COVID testing each week.

She has posted five videos so far, with each week following a specific theme ranging from pajamas to denim-on-denim to “wet ‘n wild,” which feature MacDonald and her friends fully clad in bathing suits, goggles and swim caps. The most recent video has been watched over 150,000 times, and the rest of the videos have each amassed thousands of views as well.

Fac day of the week, comment ideas for next weeks theme below!! #college #vanderbilt #collegelife

MacDonald’s first video in what has become a weekly series was posted Aug. 31, featuring her in a monochrome purple outfit complete with purple Ugg boots and heart-shaped tinted glasses. She said the idea to dress up came from a conversation with her roommates where they were lamenting the fact that there are no parties or events to wear funny clothes to due to the pandemic. Nonetheless, MacDonald said she had no idea it would attract so much attention.

“I didn’t know if people would understand the videos, since dressing up for COVID testing is kind of hard to understand through TikTok,” she said. “We just thought, ‘let’s make COVID testing fun and dress up for it as if it were an event to go to.’”

After the positive response she received on TikTok following the first week, MacDonald decided to make it a series. Before going with her roommates to get tested each week, one of them picks a theme, she said.

At the testing center, she said other students often take notice of her group’s weird costumes, but that this does not bother her. MacDonald said she enjoys getting strange looks from others during the testing period, because she sees it as an opportunity to make people laugh.

Now that it has become an established routine, MacDonald added that the people working at the testing center are starting to recognize her group by their themed outfits. She said that this past week when she and her friends went in for their test, the workers at the center asked them what their theme was and seemed to be catching on to the trend.

As MacDonald continues to make videos, she said she hopes to incorporate fan-suggested outfit ideas into her vlogs and is eager to continue using TikTok as a platform for sharing funny moments from her life with others during this unconventional semester. Next week, stay tuned for MacDonald’s alleged disco party theme.

“At the end of the day, it’s just something fun to do during the pandemic,” MacDonald said.