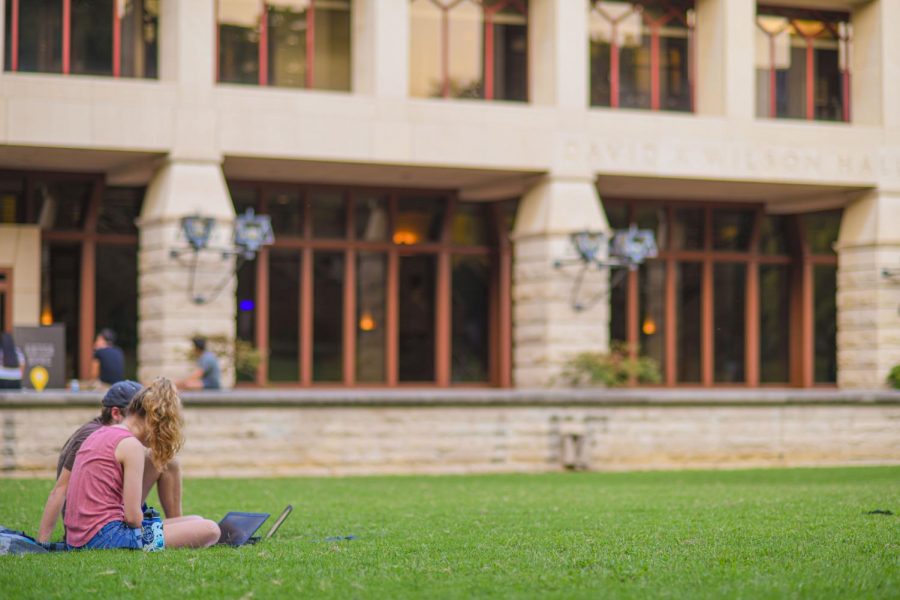 Students study on the lawn in front of Wilson Hall. (Hustler Multimedia/Truman McDaniel)

The Vanderbilt Student Government (VSG) Senate continues to feud about how to proceed following the ambiguity within the 2020-2021 VSG Senate election and the new first-year representatives.

The Election Ambiguity Resolution Bill aims to resolve several topics of contention that came up during the election. The proposed resolution would define emergency Senate sessions and designate the end of a senator’s term to be in the fall. It would also require all election data to be released to students in the case of a manual vote and qualified the 2020-2021 Senate seat reallocation would only stand for the current academic year.

This bill also targets some of the ambiguities that occurred during the 2020-2021 VSG election, including issues relating to collecting data through AnchorLink and using rank choice voting for the first time. It would additionally affect the Speaker of the Senate’s role, requiring all resolutions submitted to be considered at the next session. Currently, the speaker has discretion over what will be on the docket.

On Sept. 15, a subset of 2019-2020 senators held a meeting over Zoom concerning how to approach the uncertainty around the recent election.

Former Senator Robert Lusk presided over the meeting, being the deputy speaker from the previous year. According to Senator Ellie Ward, the senators present discussed several possibilities to preserve the integrity of the election and eventually resolved to pass an emergency resolution to salvage the voting data.

The meeting, conducted the night before the election results were released, was later declared illegitimate by the Judicial Court.

Ultimately, the election data was salvaged, and results were released. According to Ward, the majority of the senators who had led the push were reelected, and all were satisfied with how the election incidents were resolved.

Before the next VSG session on Oct. 7, Ward said that she and multiple other senators proposed a bill to address the concerns brought to light by the election incidents. This Election Ambiguity Resolution was sponsored by five returning senators and co-sponsored by more than half of the Senate.

“The resolution was presented to Petosa and included amendments clearly deciding the end date of a Senate term being in the fall, the day before election results are released for the next year and the reallocation of Senate seats stands only for this year,” Ward said.

Senator of the College of Arts & Science Bryce Collings agreed, saying that one of the most important parts of the resolution had to do with how the number of seats has changed due to the university’s Return to Campus plans and clarifying the number of seats for this academic year.

This proposed resolution, according to Ward, also officially authorized emergency sessions, so long as a quorum is present and noted that the deputy speaker or longest-tenured senator would preside in the speaker’s absence. In the case of a manual count of electoral votes, the resolution also mandated all election data be released to students.

However, Petosa took issue with certain content in the legislation and decided to withhold the resolution from the docket for the next VSG meeting, per a statement from Petosa.

“I withheld the Election Ambiguity Resolution from the legislative agenda for Wednesday, September 30th because it has not yet been sufficiently researched and prepared,” Speaker Kate Petosa said in a statement to The Hustler.

She specifically noted that the resolution proposed changes relating to her own role as Speaker of the Senate, yet she said no senators proposing the bill had answered her request to discuss its content before presenting the legislation.

Ward acknowledged Petosa’s point that the proposed statutes could undermine her authority as speaker. However, she said that Petosa’s concerns about the content of the bill should be discussed on the Senate floor rather than via emails.

“We have a section of discussion dedicated to debate, and she could have presented her opinions there instead of unanimously holding it from the docket,” Ward said.

At the Senate session on Wednesday, Sept. 30, the tension between VSG members continued, per Ward. Three bills discussed were authored and presented by the Executive Board, all targeted at creating new cabinet positions for first-year representatives.

Per Ward, any change in position or wording requires a bill to first be approved by the Senate. However, this process had not been strictly followed in these three cases.

“They presented this bill to us without consulting us, without considering whether or not we would agree or disagree with this,” Ward said. “It was an act of disrespect for the Senate, frankly. I would not say that Wednesday’s session ameliorated the existing volatile situation.”

While she supports the first-year representative position, she did not appreciate the way it was created, Ward said. For Collings, the most important part of the Election Ambiguity Resolution is to clear up the conflict over the change in representative seats for the 2020-2021 academic year and to specifically delineate the number of seats to be filled.

Ultimately, the bill passed 22-4 authorizing the position of first-year representative, with Ward being one of the ‘nays.’ The positions were confirmed immediately after their creation, which Ward also deemed unprecedented.

Another bill aiming to create a transfer student representative was proposed, however it did not pass. Collings noted that while the proposal failed, he still believed it should have been brought to the Senate before announcing the existence of the position or promising the first-year representatives their jobs.

“Because the position did not exist before the session, if we voted no, then the first-years would not have been able to be in their position,” Collings said. “It was a force of our hand, a little bit.”

Ward also said that many senators were taken by surprise to find out that one of the students in the newly created positions revealed that they had been performing in their positions weeks before the confirmation, further adding to tensions, since the students in question had not yet been confirmed by the Senate.

“They just acted like Senate confirmation and approval was some sort of a formality when really it’s the key to being able to do anything in VSG,” Ward said. “VSG can’t function properly if it’s just exec directing every other branch. That means we’re not really being representatives of the people; we’re being the puppets of the Executive Board.”

Goals for the next session

Ward and the subset of senators most concerned with the ambiguities plan to meet with Petosa and the other executive board members. Ward stated they would consider altering the content of the Election Ambiguity Resolution, though she affirmed that the concerns Petosa expressed should be discussed on the Senate floor rather than in emails between individuals.

The Senate’s next session is Wednesday, Oct. 7. Ward hopes that they can resolve the issues before then and get the bill on the next docket for discussion, she said. Per Ward, a second correspondence with Petosa proved more hopeful, and both the parties wished to have a more complete discussion.

“I hope that the VSG Senate can work together through open discussion and communication in the next few weeks to clarify ambiguities in the statutes that arose during the elections,” Petosa said. “Then I hope we can move forward as a stronger Senate and create a positive, impactful change for the Vanderbilt student body this year.