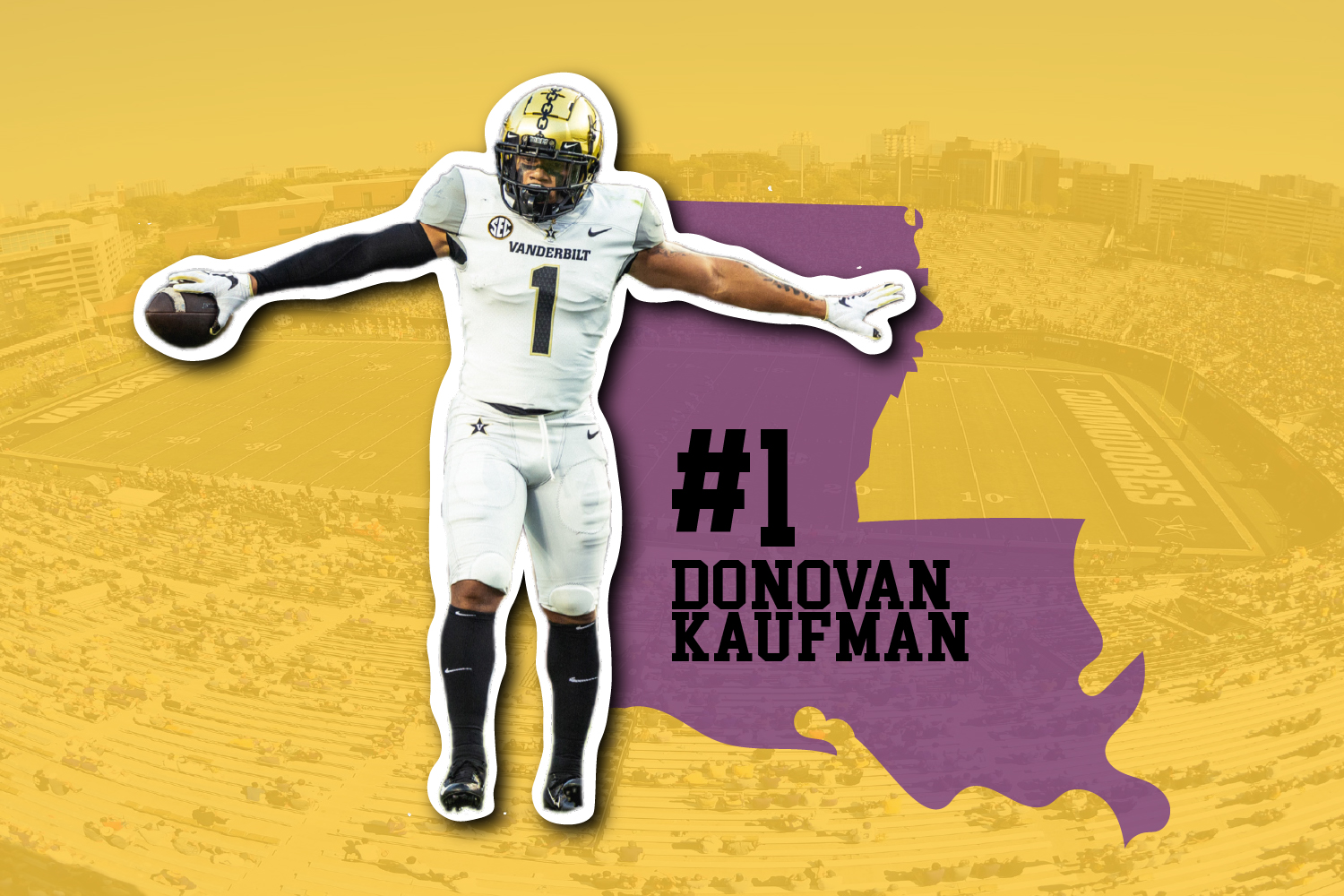 Vanderbilt Safety Donovan Kaufman was one of the top recruits in the state of Louisiana. (Emery Little)

Vanderbilt Safety Donovan Kaufman was one of the top recruits in the state of Louisiana.

The Quarterback of the Defense: Donovan Kaufman

Positionless is not a word commonly used to describe football players. While maybe the trendiest term in professional basketball, rarely can one truly categorize a football player as positionless.

But some special talents simply have a knack for the ball—regardless of where they stand in a formation, regardless of who’s opposite them on the line of scrimmage, they just make plays. Vanderbilt freshman safety Donovan Kaufman is a prime example.

When you think of some of the NFL’s most gifted secondary playmakers, you may think of Patrick Peterson. Or former Vanderbilt legend Casey Hayward. Or maybe you think of Tyrann Mathieu.

Both Mathieu and Kaufman are natives of the football-rich New Orleans metropolitan area. Both stand at an unintimidating 5’9”. Both have an unbelievable knack for impacting a game. And if you ask one of Kaufman’s former coaches, Rashaan Duke, these are not just surface-level comparisons.

“His ability to make plays on either side of the ball reminds me of Tyrann Mathieu,” Duke told The Hustler. “He reminds me of ‘the Honey Badger’ because he just makes plays.”

But entering his junior year, Kaufman held zero Division-I offers. He slowly began picking up smaller Division I offers in the spring following his junior season. Around this same time, he began playing with the Louisiana Bootleggers, a premier 7-on-7 football team now coached by Super Bowl Champion Ryan Clark.

With alumni ranging from Leonard Fournette to Derek Stingley Jr., the Bootleggers gave the best Louisiana high school sophomores and juniors a platform to perform alongside other Division-I talent. And that is exactly what Kaufman did.

“I remember when he had no offers. I called him into my room, and I said don’t worry,” Duke, a Bootleggers coach, said. “You keep holding up your end of the deal, which is grades, character and playing the game the right way, and you are going to have the offers.”

And he was right. The offers began flooding in for the skilled safety in large part thanks to his time with the Bootleggers and a legendary senior season.

While the contributions of a safety often fly under the radar, Donovan Kaufman’s certainly do not. As Vanderbilt fans have already witnessed, he boasts incredible athleticism, vision and instincts.

That is in part due to his hard work on the football field. But it is also the result of a versatile, athletic skill set that he developed in his time competing in a variety of sports in high school—six to be exact. Between football, basketball, baseball, soccer, track and wrestling, Kaufman developed his instincts for sports and a desire to win.

Eventually, Kaufman settled into the secondary with his high school team, the Archbishop Rummel Raiders. But his football career did not begin in the secondary.

“I actually was a quarterback my whole life until I got to high school, then I was converted to defense,” Kaufman told The Hustler. “I was kinda mad when they moved me to defense, but now that I’ve been playing it, it’s like, ‘alright I can do this.’”

Once he was moved to defense, not only did he quickly find ways to impact the game from the safety position, but he trained as a middle linebacker with the Bootleggers. From this experience, Kaufman continued to round out his versatile skill set while finding new ways to influence the game in incredible ways.

In addition to his secondary play for Rummel and his middle linebacker play for the Bootleggers, Kaufman was one of the most dynamic return men in the state of Louisiana, and he was even used as a running back for Rummel and head coach Nick Monica.

“When his team was struggling on offense, don’t worry, he will go make a play. And when it’s a tight game, don’t worry, either he causes the fumble or he scoops the fumble and scores,” Duke said. “Either he runs down on the kickoff and knocks the ball out of a guy’s hand, or he returns the kickoff back for a touchdown his damn self.”

That is simply the type of playmaker Kaufman is. No matter the position, no matter the stage, Kaufman finds the ball and makes a play. And that is exactly what he proved his senior year on the biggest stage of Louisiana high school football.

Powered by a dominant defense, in large part thanks to Kaufman, Rummel advanced to the Division I State Championship game against Catholic High in Yulman Stadium at Tulane. And in a tight defensive battle, it was Kaufman who propelled Rummel to a 14-10 championship victory to cap off a 13-0 senior campaign.

“That was kinda like the icing on the cake. It’s like everything that I did in high school finally came together. It ended like it was supposed to, it felt like a movie,” Kaufman said.

By channeling his quarterback instincts and multi-sport versatility, Kaufman delivered for Rummel in the state championship in all three facets of the game. He registered both of his team’s touchdowns thanks to an early rushing score followed up by the go-ahead touchdown, a 95-yard kickoff return score. And he sealed the game with a late interception. Oh, and he also had a fumble recovery en route to winning the state championship game Most Valuable Player.

“It’ll be something that people never forget,” Rummel head coach Nick Monica said. “He had a good year, but it was kind of a quiet year just because the entire defense had played so well. For him to just go nuts like that in the championship, I think it made him stand out, and it definitely will be remembered.”

The Quarterback of the Commodore Defense

Following his play with the Bootleggers and an explosive senior season, Kaufman had plenty of Power Five suitors. From Florida State to Ole Miss, several big-time programs were looking to make Kaufman their future safety. But there was only one school that wanted to make him their safety of the present. And that was Vanderbilt.

Kaufman committed to Derek Mason in June before his senior season. But it was unclear whether he would remain loyal to his first SEC offer when he announced a signing day ceremony in February of 2020 in which he would choose between Vanderbilt, Florida State, and Ole Miss. In the end, he made the decision that not only granted him immediate opportunity but also reflected his character.

“Him choosing Vanderbilt tells you what kind of head he has on his shoulders because he didn’t go with the sexiest pick,” Duke said. “He went with what he thought was best for him. And I applaud that.”

As he settles into Vanderbilt as just a freshman, he has already found a solidified role in Coach Derek Mason’s secondary. For much of his football career, Kaufman controlled the offensive side of the ball at quarterback or running back. But he has now been given the keys to Vanderbilt’s secondary and is embracing his newfound role as the quarterback of the defense. 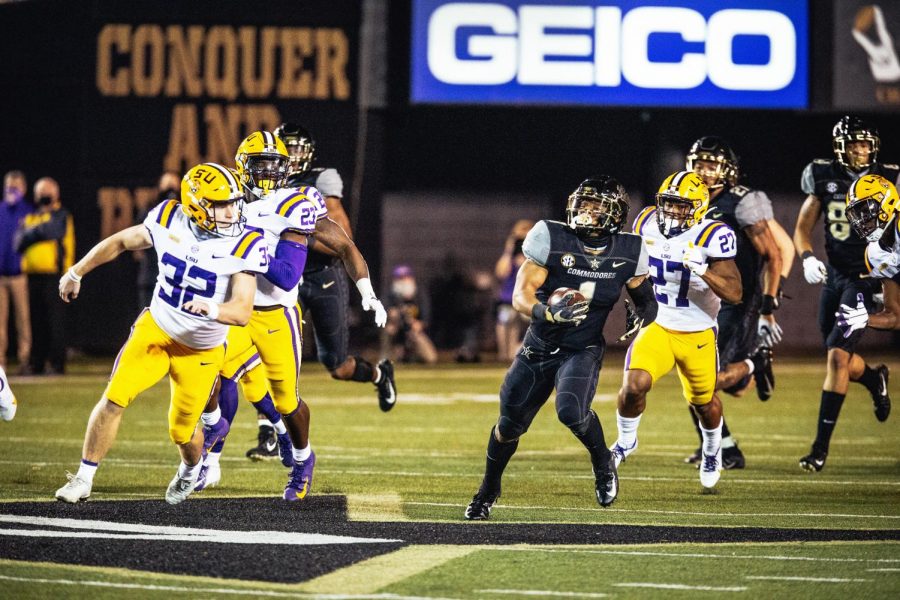 “Safety: it’s the quarterback of the defense,” Kaufman said. “The instinct that I have is, ‘I want the ball’ so I want the ball. And at safety, you call out all the checks and get everybody in their positions.”

At quarterback, Kaufman was tasked with reading defenses, play calling and leading the offense. Now at safety, he’s evolved to reading offenses and getting the ball by whatever means possible.

Being a leader on defense can be a foreboding task for a freshman, but with Kaufman’s experience, unparalleled instincts and utmost confidence, he has already made an immediate impact on both defense and special teams. Upon starting his first two games as a true freshman, he totaled 15 tackles—good for second on the team—in addition to an impressive 58-yard kick-off return against his home state school, LSU.

“It’s not like he is the biggest, baddest dude in town. His ‘want to’ is bigger and badder than everybody else,” Duke said.

Whether it was quarterback in middle school, linebacker for his 7-on-7 team or running back and safety for Rummel, Donovan Kaufman is the definition of a positionless football player. And Coach Mason agrees.

“Donovan Kaufman was a guy we were going to have trouble keeping off of the field [as a freshman],” Mason said. “He knows how to play the game. He has a true feel for how to play defense, how to play with the ball in his hand. Maybe in the future you may see him step on the offensive side for a little bit.”

Vanderbilt fans are witnessing the emergence of the next Commodore great in Kaufman. Like Mason aptly stated, it’s hard to keep someone that talented off the field. As Kaufman continues to mature, the sky’s the limit.

“Donovan Kaufman, his senior year, was the best football player in the state of Louisiana,” Duke said. “When it comes to talent and ability to make plays and show up when you need him to show up, I think Tyrann Matheiu is his ceiling. That’s what he is.”

The Vanderbilt Hustler welcomes and encourages readers to engage with content and express opinions through the comments section on our website and social media platforms. However, The Hustler reserves the right to remove comments that violate the outlined policy. Comments which contain vulgarity, hate speech, personal attacks or appear to be spam or commercial promotion will be blocked or removed by The Hustler. The comments section, both on the website and social media, is moderated by the Editor in Chief.
All The Vanderbilt Hustler Picks Reader Picks Sort: Newest
Subscribe
Login
1 Comment
Newest
Oldest Most Voted
Inline Feedbacks
View all comments
W
Will