Some international students find themselves unable to obtain desired accommodations from professors, specifically in the math department. 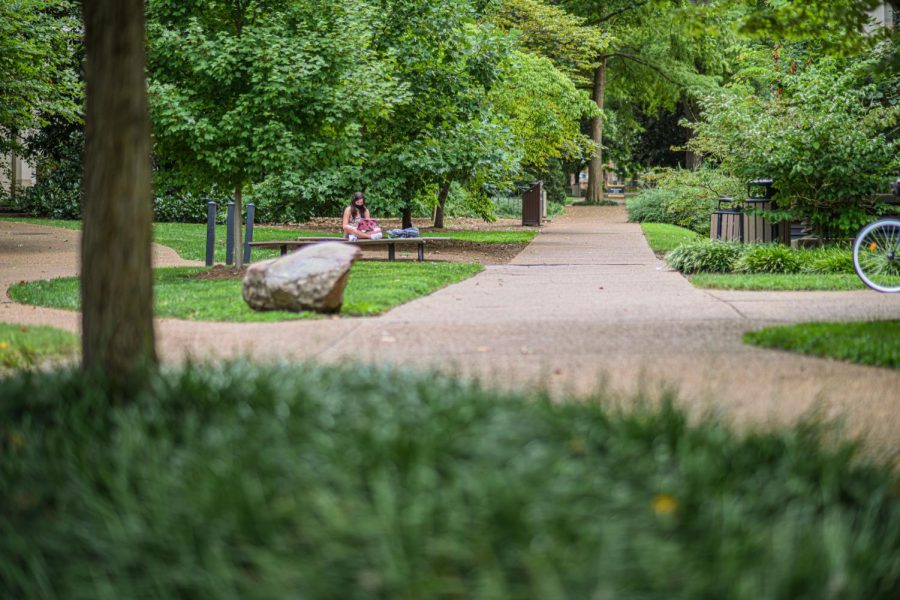 A student studies on a bench near Furman Hall. (Hustler Multimedia/Truman McDaniel)

A number of remote-only students studying abroad said they are struggling to secure asynchronous accommodations from professors.

In the wake of the university’s COVID-19 regulations and classroom capacity restrictions, Vanderbilt professors have had to make a number of changes to the way that they teach and interact with students. According to Lori Rafter, principal senior lecturer of MATH 1300 and 2820, these changes include accommodations for remote-only students, especially those living abroad.

Some international students have emailed their professors and asked whether lectures could be recorded. In her Aug. 18 email to her professor Lori Rafter, Chinese sophomore Jiale Jiang wrote about “physical and mental” difficulties that she was experiencing.

“There is a 13-hour time difference between Shanghai, the city I currently live in, and Nashville,” Jiang said in her email to professor Lori Rafter. “I am taking my classes at 2 a.m. CST (China Standard Time) every Monday, Wednesday and Friday.”

“There was another section for Math 2610 at a more acceptable time. There are four Chinese students in this course,” Huang said. “We emailed the math department, but they said that they are not able to enroll me.”

Jiang also commented on the difficulty of concentrating when taking the class at 3 a.m. She along with other international students explained that taking classes at this time affects their productivity and health.

“Attending lectures at 3 a.m. in the morning would be physically too challenging for me. I am afraid that I might fall asleep in the middle of the lecture, or that I might get sick and have to miss a few lectures,” Jiang said.

Professor Rafter replied in an Aug. 19 email to Jiang that she was sorry, but the class could not be recorded. She continued in the email that students knew what time classes were being held when they registered for this semester.

“I do believe you still have time to register for another class at a time that is more conducive to your time frame and take Statistics another semester,” Rafter said.

When asked for comment by The Hustler, Rafter stated she is unwilling to make asynchronous lectures available because she fears that they reduce students’ capacity to connect with the material.

According to an email from the Department of Mathematics Chair Mike Neamtu, professors have the decision whether or not to record their lectures, however, they are required to comply with the university’s intellectual property restrictions if they choose to do so.

Neamtu added that students are also subject to restrictions when it comes to recorded lectures.

“Any student who records class and/or publishes recordings outside the Vanderbilt ecosystem is guilty of an Honor Code violation,” Neamtu said.

Sophomore Ben Phipathananunth, who is taking classes from Bangkok, Thailand, also reached out to his professors to inquire about the possibility of posting asynchronous lectures. While he reported receiving mostly positive responses from the Department of Electrical Engineering and Computer Science, he added that two professors from the math department said they could not fulfill his request.

“I was shocked,” Phipathananunth said. “[The professor] said that the course is designed to be synchronous. His last email was just ridiculous.”

This shock led Phipathananunth to post one of these emails to the “Dank New Rand Memes” Facebook page.

Phipathananunth said this lack of accommodation forced him to switch into a different section of MATH 2610 in an effort to avoid the burdens associated with participating in a lecture at 2:20 a.m. ICT (Indochina Time).

The Hustler contacted Phipathananunth’s professor and teaching assistant but both declined a request for comment.

Director of Undergraduate Studies for the Department of Mathematics John Rafter declined to comment regarding any department-wide decisions made regarding asynchronous lectures.

“The deadline and due dates are funky. A lot of [my assignments] are due when I am supposed to be sleeping,” Salli said.

Both Jiang and Huang said that the synchronous lectures affected their physical health.

“I don’t have a full night [of] sleep anymore,” Jiang said. “I get up in the middle of the night to take one lecture. I sleep for four to five hours. Then, I get up in the morning. My life starts at 12 noon. It is not a healthy schedule for me.”

Jiang said that she gets a headache from time to time because her Fall 2020 schedule is so drastically different from her previous semesters. She said that she used to get up around 10 a.m. and go to bed at around 12 a.m.

“After a week or so, the schedule affected my health. I caught a cold,” Huang said.

The possibility of a “Go Local” Program

Vanderbilt University Chinese Students and Scholars Association (VUCSSA) requested that the university establish a “Go Local” program. In an Aug 5. email, VUCSSA indicated that there was interest from Chinese institutions in such a program.

“We have been reached out by several top Chinese universities, including Peking University and Shanghai Jiao Tong University regarding opportunities to cooperate, including their willingness to offer courses with credits transferable to Vanderbilt,” the VUCSSA email stated.

However, the university would not be able to pursue a “Go Local” option, per an Aug. 13 email response from Interim Director of International Student and Scholar Services Susie Archer.

“We understand your interest in the ‘Go Local’ programs that you reference in your August 5 email,” Archer’s email stated. “As we said in July in reference to a similar suggestion on Alternative Study Plans, any agreement of this kind requires intense research and the formulation of Articulation Agreements between Vanderbilt schools and departments and potential international universities.”

Archer indicated in her Aug. 13. email that “all of our efforts at this time are devoted to insuring (sic) a safe and smooth beginning to the Fall 2020 semester.”

“I got a lot of good responses,” Phipathananunth said. “My CS class has been good on this.”

Jiang added that her professors, even those who choose not to make asynchronous lectures available, have been caring.

Though professors may be unwilling to post asynchronous lectures, some, including Rafter, said  that they have made other accommodations to ease the burden of remote-only students.

Alongside other professors, Rafter has changed the time at which she holds office hours to an earlier hour in the morning than she has done in the past.

Rafter said she has also implemented the updated technology that Vanderbilt has made available to its professors, including larger monitors to see her students and new sound equipment in her classroom. Rafter said that this allows remote-only students to interact with her as well as their peers even though they are not physically present in the classroom.

“I have in front of me this huge monitor with the faces of all the remote-only students and their names under it,” Rafter said. “ I can still call on them. They can ask questions. They can speak to the whole class.”