Vanderbilt in France? Well, not anymore. 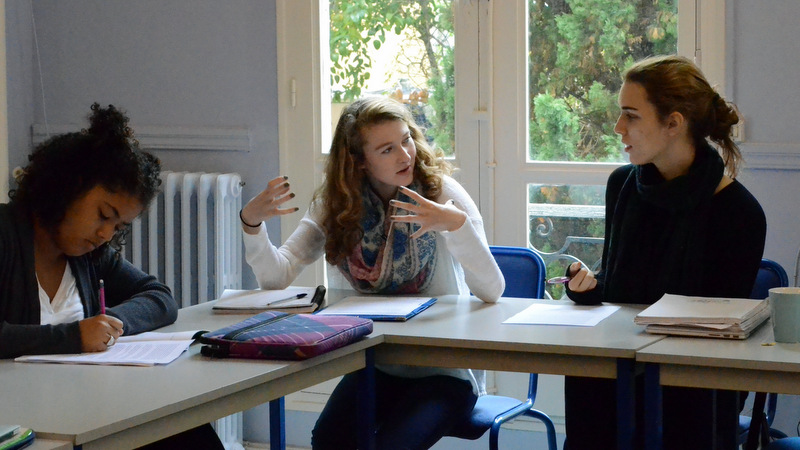 Vanderbilt in France students converse in a classroom. (Vanderbilt University)

In 2018, Vanderbilt closed the 57-year-old Vanderbilt in France (VIF) program without an official explanation, which left some faculty and alumni discouraged. Some of them have recently called for its reopening.

VIF was a study abroad program situated in Aix-en-Provence that attracted thousands of Vanderbilt students over the years.

According to the alumni, including John Peters (B.A. 2000), it was one of the few programs that were different, consequently building a strong sense of community among the attendees. Peters said the program made sure that the students were supported by quality professors who were invested in you and a much more intimate and unique experience.

“The closing was terrible, and I was flabbergasted,” Alumnus John Peters said.

In an obituary sent to Vanderbilt Magazine that did not get published, Professor Morton Holbrook, a former VIF alumnus, expressed his appreciation for the program. For him, the memory of VIF endured as a tribute to its founders, teachers and administrators who carried the program forward.

“The time spent in Aix strengthened their feelings of affection and support for their alma mater in Nashville,” Holbrook said. “The program’s life spanned the transformation of France from a colonial power, led by Charles de Gaulle to divest itself of Algeria, to the EU leader of today, where immigrants, as in the United States, have contributed much to national life, most recently in the World Cup.”

Holbrook attended VIF the first semester it existed, in 1961. For him, the experience included studying at Aix-en-Provence, a five-day boat trip from Montreal to France, spotting Pablo Picasso at a bull ring, learning colloquial French, driving a motor scooter through France and discovering his love for languages and diplomacy.

Peters said that he enjoyed the ability to be in France, yet still be in Vanderbilt at the same time.

“There’s a reason why people, for that many years, were attracted to it, and I think it’s really unfortunate that it’s no longer an option,” Peters said.

For Professor of French, English, Jewish Studies and Law Robert Barsky, VIF was something truly special. He said it was a wonderful experience that reinforced his support for overseas study, research, and Immersion.

“We traveled with the students to Paris, Nice, and surrounding regions, in order to bolster their understanding of France,” he said in an email to The Hustler. “There’s something really special about researching and teaching in the geographical locale from which the material in the course emanates, and for that reason, I taught courses about Émile Zola and the Medieval Carnival.”

“Both VIF and the Maymester programs have been extraordinarily important for my own research, and I have developed an array of projects and published work that grew specifically out of my work with Vanderbilt study abroad programs,” Barsky said.

What made Vanderbilt’s programs different

Jeremy Stelmack (B.A. 2016), a recent alumnus of the program, had the opportunity to study abroad twice, once through a “Vanderbilt in” program. According to Stelmack, the VIF program was much more fluid. He expressed that in the other program, there were a lot of structural barriers in terms of transferring credits and earning credits towards his major and minor.

“Plus, you basically have guaranteed great quality professors who have an understanding of working with American students,” Stelmack said. “I always felt comfortable going to my professors.”

Peters also adds that the interactions were much more intimate in the Vanderbilt program.

“When you would go to the non-affiliated schools, you could almost get lost,” Peters said.

He also emphasized the efforts that Vanderbilt put in to make sure it was an immersive experience.

“We could not speak English at all when we were in the building,” Peters said. “The director of the program, who was a Vanderbilt faculty member, was right there with us every single day. On the other hand, despite them being hard, a lot of other study-abroad programs often become like an extended spring break.”

Stelmack thinks that there were pros and cons of having a “Vanderbilt bubble” abroad. According to him, there wasn’t much incentive to go and make local friends in VIF, because they were isolated. Nonetheless, Stelmack believes that that would be the case in any program unless one opts for an exchange program to fully immerse themselves. Programs not directly affiliated with Vanderbilt had a “much weaker support system.”

“The professors aren’t going to be particularly invested in you; their focus is on the French students. It’s also very different didactic methods,” Stelmack said regarding other programs.

“VIF is a Vanderbilt program, whereas CIEE and other such organizations are private,” Barsky said. “We did a research project in which we explored Maymester and other overseas teachings. Although there are some good privately-run programs, the results of our inquiry reinforced my belief that Vanderbilt faculty-led programs are far superior to private-sector alternatives.”

According to Holbrook, the Vanderbilt program cemented his relationship with the university.

The closing of the program

Several faculty and alumni also voiced their confusion over why the VIF program was canceled.

“When I asked an administrator of the program why they closed it, she didn’t really know. It would surprise me a little bit if people stopped being interested in it, so I would assume it’s budgetary but I don’t really know.” Peters said.

Holbrook also received a variety of responses, from monetary issues to problems of subsidizing French majors, when he put forward the idea of reestablishing Vanderbilt programs anywhere in the world. According to him, no one in the administration was pushing it. Moreover, he thinks that the university should have publicized the program outside the French department as well.

“A first-rate university should have an international program instead of relying on other schools,” Holbrook said.

“Whenever I have donated to Vanderbilt, I specifically put on my donation that I wanted it to go towards the Office of Overseas studies,” Peters said. “I think that they can push to fill if there are any gaps in the budget. I think it is a program that is totally worth trying to revive.” Peters said.

Not only were the faculty and alumni involved concerned about the closing of the program in its entirety, but they also believe the manner in which it was shut down could have gone smoother.

Virginia Scott is a professor emeritus of French and applied linguistics and education as well as the former academic director for the Center for Second Language Studies at Vanderbilt. According to Scott, although the issues were understandable, the way the administration ended the program concerned her.

“People who had been devoted to us for many years were fired, and the building was left filled with the furniture and books that members of the French department had contributed over the years,” Scott said in an email to The Hustler. “It could have been done civilly and with care, which might have taken 6-9 months, but it would not have left a scar.  Our relationships with those French administrators and teaching staff were permanently destroyed.”

Holbrook noted the new chancellor’s ties to the University of Chicago, which has multiple study-abroad programs of its own. Consequently, he said he hopes to get Vanderbilt administration and Chancellor Daniel Diermeier to reconsider these possibilities.

The current pandemic also brings to light various tangents to the program.

Scott said that she believes COVID-19 would have brought VIF to its knees in that it could not have survived so many years without students. Barsky also expressed his concern in this matter.

“The real question now is what the future of overseas study will look like in the face of the COVID crisis, and the challenges that it has created,” Barsky said. “I do think that Vanderbilt is well-positioned to explore and expand options for overseas study. In spite of the demise of Vanderbilt overseas programs, we have built a really comprehensive array of Maymester and ASB experiences.”