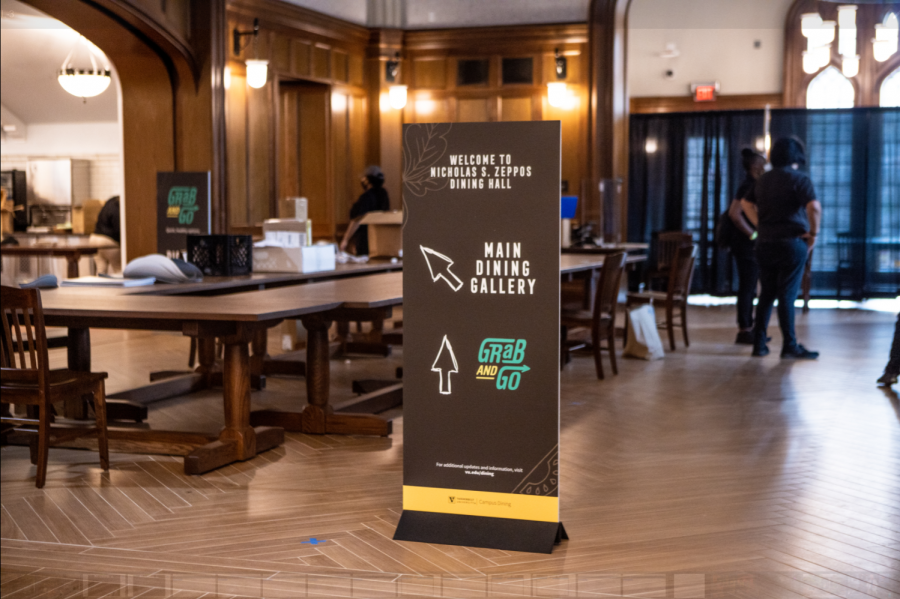 On Monday, Sept. 14, all campus dining halls began serving compostable silverware as opposed to the plastic utensils they previously offered.

In dealing with the ongoing pandemic, dining halls have had to use more plastic with the increasing amount of to-go orders.

“Campus Dining is constantly looking for ways to be more sustainable,” Suzanne Herron, Sustainability Director for Campus Dining, said in a message to The Hustler. “Once we had to move to serving all food to-go, we wanted to be able to offer compostable flatware, even though we cannot currently offer compostable to-go containers.”

Students have expressed concerns over Vanderbilt’s sustainability as the COVID pandemic has forced dining halls to make meals completely to-go.

“The switch is a really good move on dining’s part in order to decrease the waste generation that coronavirus has caused,” Sydney Juda, president of Students Promoting Environmental Awareness and Responsibility (SPEAR), said in a message to The Hustler. “I know a lot of SPEAR members were concerned about the amount of plastic they had to consume in order to eat on campus, so I think that it was a smart decision.”

According to Juda, the positive impact of the switch is mediated by the lack of proper disposal receptors.

According to Herron, Vanderbilt dining halls use approximately 4,500 sets of compostable flatware daily, none of which are industrially composted.

“I am unaware of any receptacles for collecting the compostable flatware, since Plant Ops is finding it challenging to keep up with the waste issue,” Herron said. “Our best hope is that those in the Vanderbilt community who are faculty and staff are able to compost them at home.”

“It’s really hard to recycle that, because obviously you have to wash it out before you recycle it,” sophomore Collin Peabody said. “College students aren’t going to go back into their dorm bathrooms and wash out in the dorm sink, because it’s food and you need a garbage disposal.”

Juda and Herron both emphasized that the university is still committed to sustainable measures, despite the difficulties COVID-19 has caused.

Vanderbilt has made efforts to be more environmentally friendly, including recycling all paper, cardboard, plastic, tin, aluminum and glass, as well as eliminating single-use plastics, such as plastic bags, straws, lids and bottled water, according to Herron. Campus Dining has twice won The Greenest Group on Campus award in 2013 and 2018.

Rand dining worker Laura Rester is optimistic about the changes Rand has made.

“So far we’ve done a lot more in prevention than probably any restaurant I’d imagine, lots of changes to things like breaks and a reduction of staff to reduce the number of people in a room in general,” Rester said in a message to The Hustler.

Besides wearing masks and social distancing, workers also have their temperature checked when they come into work, Rester said.

COVID-19 precautions have affected the campus dining experience of every on-campus student, but students with restricted diets say that they feel this effect amplified.

Sophomore Kaylon Smith began eating vegan when Vanderbilt classes transitioned online this spring but said she has found the lifestyle impossible to keep up here, even with a kitchen in her on-campus suite. Meal prepping took more time than she anticipated, and grocery shopping presented extra difficulties for her as a student-athlete.

“It’s hard for us to just get up and leave because we’re trying to be in this little bubble for athletics,” Smith said. “I can’t really go to Whole Foods and pick up food like that on a regular basis.”

On campus, Smith most often eats at McGugin. Over time, Smith said, she grew tired of the vegan entrée and side options there and decided to transition back to a pescatarian diet.

But for Suttle, whose nutritional philosophy is based on balance, the well-rounded nature of these limited offerings has offered encouragement.

The Market Baskets offer an additional balanced option this semester, Suttle said. Market Baskets, which allow students to use a meal swipe for a selection of grocery items, accommodate students who feel more comfortable preparing food in their dorms. The demand for Market Baskets has been higher than expected, causing some locations to sell out their stock, Suttle said.

“As a dietician, it’s exciting to hear that people are interested in wanting to cook for themselves,” Suttle said. “The basket offerings are a lot of grocery staples that can help promote a balanced diet. All that’s super encouraging to hear.”

“If you eat the vegetarian option each meal of the day, your overall nutrition is not as good,” Peabody said. “You’re going to eat either a lot of carbs or a lot of sodium and not a lot of protein over the course of the day.”

Peabody experienced the limitations of Vanderbilt’s vegan options when he considered switching to a vegan lifestyle during his first year at Vanderbilt.

“I realized that I can’t do this here,” Peabody said. “Again, not because they weren’t providing me options, but because I thought that I wasn’t getting nourished well, if I was doing it three meals a day, every day.”

According to Suttle, high levels of sodium are an inevitable result of the variety of vegan options students want.

Suttle noted that salads and tofu provide constant, low-sodium alternatives, and that students can always meet with her individually to discuss nutritional concerns.

“If a student meets with me and we go through the menus and we’re seeing that gap, that might be something that we look into and something I talk with our executive chef on,” Suttle said. “We listen to the feedback and want to hear it, too.”

While Peabody and Smith both switched to less restrictive diets, sophomore Celina Sattelkau has moved in the opposite direction.

When Sattelkau arrived on campus as a first-year last fall, she was already eating vegetarian and eventually switched to a vegan lifestyle in November.

“I wouldn’t have made the decision if I didn’t know it was possible on campus,” Sattelkau said. “Our campus, compared to other campuses, is quite good with these options.”

As a student golfer, Sattelkau had access to expanded options through McGugin, but eating vegan still required careful forethought, she said.

“It takes a lot of planning with your macros to make sure you get enough protein in everything,” Sattelkau said. “At the beginning of the week, I would think about, when do I eat where?”

With kitchen access high on her priority list, Sattelkau eventually decided to live off campus this fall, but her overall impression of Campus Dining remains positive.

“Campus Dining has been trying to make life as a vegan easier. That’s what my experience is,” Sattelkau said. “They’re actually trying.”