Week One featured a dynamic new Commodore offense centered around quarterback Ken Seals and a defensive line that looked as dominant as advertised. 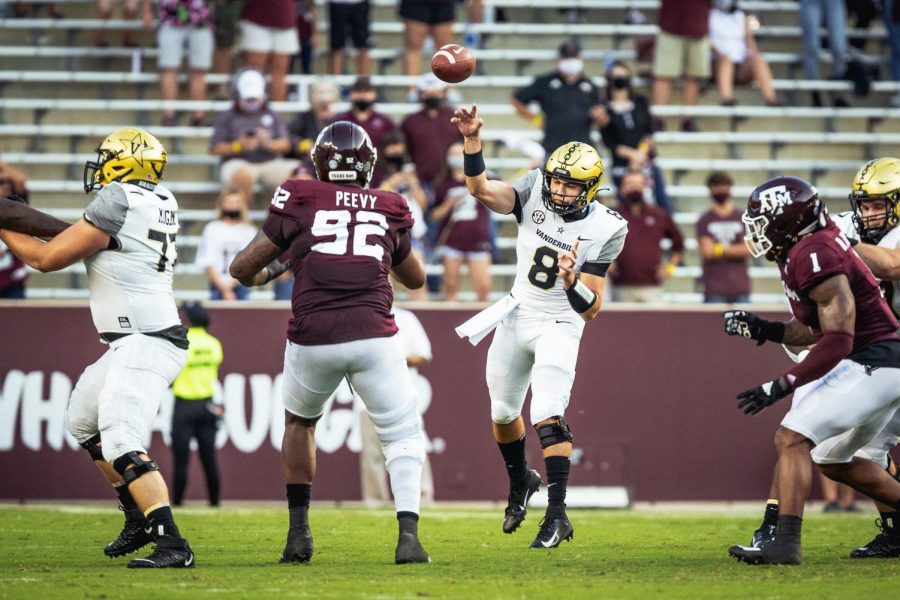 With one week of Vanderbilt football officially in the books, there is a universal sense of optimism among Commodore Football fans—and rightfully so. Despite a sour 17-12 defeat at the hands of the Texas A&M Aggies, Commodore Nation has much to be excited about.

Week One featured the productive debut of Vanderbilt’s quarterback of the future, freshman Ken Seals, and introduced fans to the new brand of Vanderbilt offense, a spread out, up-tempo approach implemented by new offensive coordinatorTodd Fitch. Defensively, fans were reminded of how dominant Dayo Odeyingbo, Andre Mintze and Vanderbilt’s front seven truly can be and the incredible depth the Commodores have in the secondary.

Despite the positive signs, Seals and the Commodores will have another telling test this Saturday as LSU visits Nashville. And there is always room for improvement.

“It wasn’t pretty all the time, but their effort was there. I thought they strained in this game and I think that strain kept us in this ballgame,” Mason said after the game. “Week One to Week Two is when teams generally make their biggest jump, and we need to make a big jump.”
Ken Seals Rolling out of the Pocket

It was the highly touted freshman from Texas, Ken Seals, who earned the starting nod for the Commodores’ season opener, and it appears as though he was indeed the correct choice. In his SEC debut, he completed 20 of 29 pass attempts en route to 150 yards, one touchdown and two interceptions.

But in order to fully appreciate Seals’ preliminary performance in the black and gold, one must leave the stat sheet behind and observe how poised and collected the freshman was. A trip to College Station amid a pandemic is no walk in the park for an 18-year-old quarterback. But Seals handled it with class and showed the potential to be an elite quarterback in the Southeastern Conference (SEC) for years to come.

And the film certainly agrees. Seals looked comfortable both sitting in the pocket and reading defenses. But in particular, Seals’ ability to shift the Aggie defense by moving outside of the pocket and throwing on the move opens up an array of possibilities for Fitch and the Commodore offense.

With Vanderbilt’s lack of experience on the offensive line, using rollouts and play action forced A&M pass rushers to constantly be in pursuit, rather than matching up one-on-one with Commodore offensive linemen. Seals executed rollouts and play action perfectly, showing an innate ability to quickly square his shoulders and deliver accurate passes when rolling both right and left out of the pocket. He completed six passes for more than ten yards in the contest, and three of them were off rollouts.

Furthermore, he was able to place the ball precisely even on the move. Specifically, on his touchdown throw to Amir Abdur-Rahman, he lofted a perfect ball to the right corner of the endzone where only his receiver would be able to catch it.
Up-Tempo Offensive Sets

The most glaring difference between the 2020 Commodores and the Commodores fans are accustomed to is the spread and up-tempo nature of Fitch’s new offense. Whereas Kyle Shurmer and Riley Neal operated primarily under center in a traditional huddle environment, Ken Seals took a majority of snaps from the shotgun, and the offense featured a number of unique sets. And they worked.

“We changed some speed at times, went from normal speed to NASCAR, jumped into different personnel groupings. I thought the tempo actually got to Texas A&M throughout the ballgame at different points,” Mason said.

Vanderbilt ran a total of 67 plays on Saturday with a balance of 38 running to 29 passing and held possession for 34 minutes of the contest. That breaks down to nearly two plays per minute, a comparatively large jump in speed from last year’s pace. Using this speed, Vanderbilt was able to force Texas A&M into several inopportune line changes and substitutions. Again, Fitch and the coaching staff designed a system that kept Aggie defenders on their toes while not putting too much pressure on their inexperienced offensive line.

Ken Seals was given free reign to execute a number of option plays that increased pace and displayed his solid vision and decision-making. Out of these option plays, he also was able to feature his running ability. Although thought of as a pro-style quarterback, Seals did in fact rush for nearly 500 yards and 7 touchdowns his senior year, something Fitch evidently is looking to use in his offense.

Most impressively, he was able to execute a number of run-pass option plays (RPOs) in which he tracks the defense to choose whether to hand it off to the running back or make a quick throw to a receiver. Multiple times he used wise judgement to find Cam Johnson and Ben Bresnahan on quick hitting routes that resulted in nice gains for the Commodores.
Defensive Line Collapsing the Pocket

For the Commodores to be competitive in this game, their stars had to shine. And preseason All-SEC seniors Dayo Odeyingbo and Andre Mintze certainly did that on the defensive side of the ball. Watch the tape, and you’ll see the two defensive captains around the football a lot. Whether setting the edge or getting to the quarterback, they both demonstrated why the Commodores can lean on them to set the game’s tone. At crucial times in the game, the defensive line got pressure and kept the offense within shouting distance.

When The Hustler talked to Mintze just two weeks before the game, he said that the transition to a new four-down front defense headed by new defensive coordinator Ted Roof was “smooth, to say the least.” Many still had doubts about how it would fare against a talented SEC offense, but these clips help demonstrate why there’s so much hope and anticipation surrounding this team and its next few games.

“I thought we got vertical penetration, I thought we were able to set edges. Our ends, whether it was Dayo or Mintze, I thought those guys did a good job most of the night setting edges and keeping the quarterback contained,” Mason said.

Mason was impressed with the line’s overall effort, but a few plays will stand out in particular. Mintze beating a late double team and stripping Kellen Mond of the ball on a drive in which the Aggies were knocking on the red zone door seems representative of the kind of day the Commodore defense had. And a fourth-and-one fumble late in the game seemed like just the kind of turning point the Commodores needed from their defense, but it was the play before that stood out on film.

On third-and-one, right off the bat, it looks like there’s a gaping hole thanks to double teams on Raashaan Wilkins Jr. and Odeyingbo, but that lane closes down quickly. And who meets Isaiah Spiller, a 6’1’’, 220-pound running back with a full head of steam, at the line? Safety Dashaun Jerkins. He really signed his name on the game, and this play is really all you need to watch to prove why. Right before Spiller tries to hit the hole, Jerkins teleports to meet him at the line. He covered the gap quickly and kept Vanderbilt in the game. His play through all four quarters has fans both impressed and excited for what the junior from Virginia can do this season.
Missed Tackles

Missed tackles plagued both the Vanderbilt front seven and the secondary on Saturday. At times, it became hard to watch as short gains turned into huge chunk plays. Just in these seven plays alone, missed tackles handed Texas A&M nearly 180 yards. To put that in perspective, the Aggies only gained 375 of total offense all night—that’s about 48% of their overall yards. That means Vanderbilt would have failed their missed tackles test, badly too.

Missed tackles turns a field goal into a touchdown, and a third down stop into a new set of downs for the offense. It gives Vanderbilt opponents extra, unnecessary chances to put points on the board, which is something the Commodores cannot afford if they want to come out of this season with multiple victories.

Finding the ball and wrapping up aren’t the only areas for improvement for this team, but they will certainly mitigate big plays and easy touchdowns

There is always room for growth, but as the film shows, there is reason for positivity surrounding the Commodores’ Week One performance. This week, Seals will be tested by the reigning National Champion LSU Tigers. But if Fitch is able to gameplan for the Tigers as well as he did for the Aggies, and the defense continues to bring elite pressure and cleans up sloppy tackling, this could be a tightly-contested affair in Nashville Saturday evening.